Jermall Charlo – who’s next for the Hit Man? 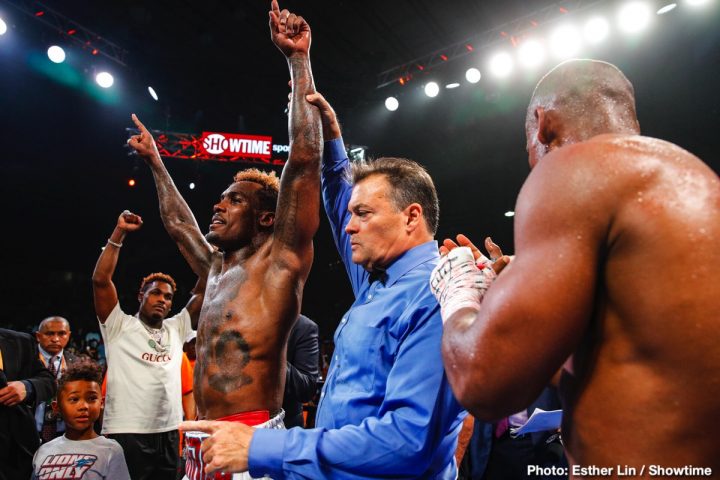 By Sean Jones: WBC middleweight champion Jermall Charlo successfully defended his title for the first time last Saturday night in beating Brandon Adams by a 12 round unanimous decision, and he’s now hoping to get  a bigger match-up against Saul Canelo Alvarez or Gennady Golovkin.

Jermall spent a good portion of his post-fight press conference calling out Canelo in letting the media know he wants to fight him next. A fight against Canelo is arguably a pipe dream for Charlo, because he’s not going to get that fight. Canelo could have fought Charlo many times over the years, but he chose not to. That’s not going to change now.

If last Saturday’s opponent Adams (21-3, 13 KO) is any indication of the quality of Charlo’s opposition, then it’s not looking good for his next fight.

Adams was pooled from the #12 spot in the World Boxing Council’s rankings. That’s fine for this fight, considering that Charlo originally was defending his interim WBC middleweight title. Last week the WBC elevated Charlo to WBC middleweight champion status after they made Canelo their Franchise 160 pound champion. The fans are going to expect more from Charlo moving forward, and they want to see him fight better guys that have a shot at beating him.

Here are some of the options for Charlo’s next fight:

Golovkin is ranked #1 by the WBC , but that ranking is meaningless now. GGG was in the perfect spot when Canelo Alvarez held the WBC middleweight title, but now that he’s been given the Franchise title by the WBC, it’s a waste of time. The WBC might as well give GGG the Franchise tag as well, because he’s not likely to fight Charlo. Golovkin is winning down his career, and he’ll likely retire after his last five fights with DAZN are finished. Aside from Canelo, Golovkin isn’t expected to fight anyone talented.

This would be an excellent option for Charlo if Andrade’s management at Matchroom Boxing USA were willing to put him in a unification fight. Andrade is with DAZN, and his promoter Eddie Hearn hasn’t seemed eager to want to match him up against Charlo. Last Saturday night would have been the perfect time for Andrade and Hearn to call out Charlo, but they didn’t even mention his name. You have to assume there’s no interest on Andrade, Hearn and DAZN’s part in making a fight with Charlo.

A fight that some of the hardcore boxing fans would like to see is a rematch between Charlo and Korobov (28-2-1, 14 KOs). Charlo beat Korobov by a 12 round unanimous decision last December in New York. However a lot of boxing fans felt that Korobov, 36, did enough deserve the victory. The judges gave Charlo the win by the scores 116-112, 119-108 and 116-112. Korobov is coming off of a controversial 10 round draw against Immanuwel Aleem (18-2-1, 11 KOs) last May. For that reason, it’s not a good time for Korobov to be used as an opponent for Charlo unless that’s as good as it gets for them.  Still, Korobov has a good chance of getting the fight with Charlo.

This is a guy that was under consideration for Golovkin’s last fight on June 8. If GGG doesn’t fight Canelo in September, it’s likely that he’ll wind up facing him. Either way, Szeremeta is a poor choice for Charlo or Golovkin. The casual boxing fans in the U.S have never heard of Szeremeta, and they’re not going to be excited with him as an opponent for Charlo.

Aleem fought to a 10 round draw against Korobov last May in Fairfax, Virginia. In 2017, Aleem was knocked out n the third round by Hugo Centeno Jr. He’s not an upgrade over Brandon Adams. If this is all Charlo’s management can get for him, then there’s not much you can do about it. There won’t be much interest by fans in a fight between Charlo and Aleem.

Former WBA light middleweight champion Jack Culcay would be a good choice for Charlo to fight. Culay (26-4, 13 KOs) lost to Sergiy Derevyanchenko by a 12 round unanimous decision last April. The recent defeat by Culcay makes him a poor choice to be challenging for a world title

Boxing » News » Jermall Charlo – who’s next for the Hit Man?