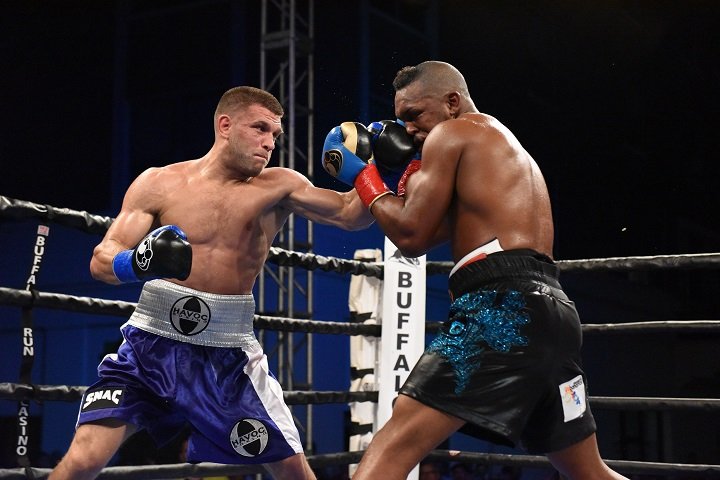 By Dan Ambrose: The IBF will be ordering a purse bid for a mandatory title defense between IBF middleweight champion Saul Canelo Alvarez and challenger Sergiy Derevyanchenko, according to Mike Coppinger.

Canelo Alvarez reportedly isn’t interest in fighting IBF #1 contender Derevyanchenko. So instead of Canelo defending the IBF middleweight title against Derevyanchenko (13-1, 10 KOs), he’s expected to be stripped by the IBF and that’ll free it up for #3 IBF Gennady Golovkin to potentially fight for it. It would give GGG a chance to win his old IBF world title back. The belt was stripped him last year by the IBF when he failed to defend it against Derevyanchenko.

Golovkin vs. Derevyanchenko for IBF title?

It would make a lot of sense for Golovkin (39-1-1, 35 KOs) to face Derevyanchenko for the IBF middleweight title once it becomes vacant, but DAZN probably won’t agree to that fight. Golovkin is expected to face unbeaten WBO junior middleweight champion Jaime Munguia in October on DAZN. That match will attract a lot more subscribers than a GGG-Derevyanchenko fight would. There’s no question about it. Golovkin vs. Munguia will interest a lot of boxing fans. It doesn’t matter that there won’t be a title on the line.

Derevyanchenko is an excellent fighter, but he’s not a big name in the U.S, and he lacks a world title. Golovkin vs. Munguia won’t be for a world title, but two sluggers are popular enough for the fight to be viewed as a compelling match-up by fans in the United States.

Golovkin would be making Canelo and Golden Boy Promotions happy by fighting Derevyanchenko for the IBF belt. They told Golovkin to win a world title before he asks Canelo for a trilogy match, but he’s not done what they’ve asked. GGG wasted a fight recently in facing fringe contender Steve Rolls, and he’s about to the same thing against Munguia.

By Golovkin capturing the vacant IBF middleweight title, he’d go into the trilogy fight with Canelo as a world champion instead of just a challenger. Canelo and Golden Boy Promotions wants Golovkin to resurrect his career before he faces Canelo in a third fight, but he’s not done that yet. Facing Derevyanchenko will give Golovkin the chance to turn things around with his career before facing Canelo again. Golovkin should want to win the IBF title, but he probably won’t bother. He’ll likely take the fight that DAZN wants him to take against Munguia rather than face Derevyanchenko for the vacant IBF title, and potentially lose.

If Golovkin passes up the opportunity to fight Derevyanchenko for the vacant IBF title, it could be bad for DAZN. The IBF title will probably wind up in the hands of a fighter signed with Premier Boxing Champions, and that’ll complicate things later. Right now, it’s possible for a fight for the unified middleweight championship to be made, because DAZN  fighters Canelo and Demetrius Andrade have all 4 titles. If Golovkin chooses not to fight for the IBF belt, then a PBC fighter gets the strap, and it’ll make things difficult to put together a match for the unified championship later on down the road.

It’s unclear whether DAZN cares about such things at this point. They might be focusing strictly on putting together fights that bring in the most subscribers possible rather than thinking about more trivial matters like unifying the middleweight division. Once upon a time, it mattered to Golovkin and Canelo to unify the middleweight division, but they’re feelings may have changed now that they’ve been given huge nine-figure contracts with DAZN. If Canelo vacates or is tripped of his IBF title, then Derevyanchenko will be in a good position to capture the belt if Golovkin elects not to face him for the strap.

The next highest ranked contender in the international Boxing Federation’s top 15 rankings at middleweight is unbeaten Kamil Szeremeta (19-0, 4 KOs). He’s a light punching contender with a resume filled with mediocre opposition. As a result, Derevyanchyenko would have an excellent chance of beating Szeremeta to win the IBF belt. Once Derevyanchenko gets a hold of the IBF title, it’s likely that Premier Boxing Champions will quickly move to setup a unification fight between him and WBC champion Jermall Charlo.

Charlo will likely beat Derevyanchenko, and wind up as the unified IBF & WBC champion. Since Charlo isn’t a big draw, there won’t much of a compelling reason for Canelo to cross the pond to face Charlo in a fight for the unified middleweight championship. The middleweight division will be fractured with champions fighting on different networks. It’s obviously not a good thing for the boxing public, because they won’t be able to identify who the true #1 fighter is in the 160 pound division.