Hearn: Dave Allen will face Povetkin next if he wins tonight against Price 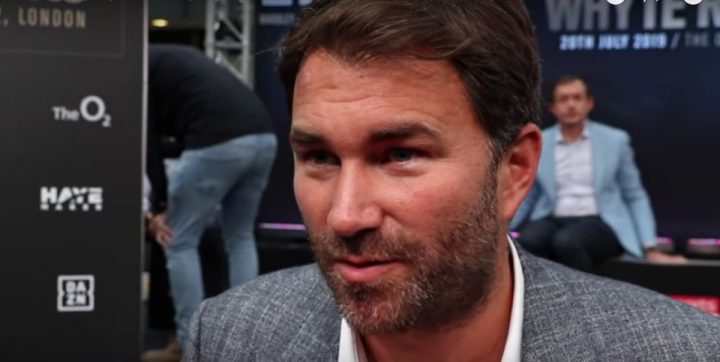 By Tim Royner: Eddie Hearn says it’s already a done deal that Dave Allen will face former WBA heavyweight champion Alexander Povetkin next on August 31 if he beats David Price tonight at the O2 Arena in London, England. Hearn states that he’s already spoken to Povetkin’s team, and the fights a done deal, as long as Allen beats Price.

Allen sees 36-year-old Price as someone that he’ll blast out in three rounds or less, and he could be right. The 27-year-old Allen has youth, chin and punching power going for him against the faded veteran Price. Allen’s top level punch resistance might be enough on it’s own for him to win. Kash Ali, a domestic level fighters with meager talent, had Price on the ropes ready to be stopped in the fifth round last March. Price landed a big uppercut that hurt Ali. He then tackled Price, and bit him on the midsection, which resulted in Ali being disqualified.

Hearn: Price is “done” if he loses to Dave Allen

“This is a fight that everybody is talking about. It’s huge,” said Hearn to IFL TV about the Price vs. Allen fight. “Is Price going to clean him out early? Is Allen going to chin him early or is he going to chin him later? Who knows? Someone is going to get sparked out in all of those three heavyweight fights [Dillian Whyte vs. Oscar Rivas, Price vs. Allen and Chisora vs. Szpilka]. I love Price. Why do I love Price. Because he can get knocked out, and he can knock you the spark out as well. That’s the sign of an entertaining heavyweight fight. If he [Price] loses, he’s done. If he wins, he goes on to take on one of these big fights,” said Hearn.

Knowing Hearn, Price WON’T be done if he loses to Allen tonight. Hearn will continue to put Price in last chance fights against his other heavyweights in his Matchroom Boxing stable. Price’s name recognition in the UK is high, so he’ll continue to be useful for Hearn to plug in to face his other fighters in his stable. However, at some point, Hearn will get diminishing returns in his ability to match Price against his other guys. Price is getting old, and his knockout losses are starting to occur repeatedly. Hearn can’t match Price against Usyk, Filip Hrgovic, Joseph Parker or Michael Hunter if he loses tonight.

Hearn says Allen vs. Povetkin is “On” if Dave beats Price

“Dave Allen keeps saying to me, ‘Give me [Alexander] Povetkin next.’ I spoke to Povetkin’s team. That fights on, as far as I’m concerned for the [Luke] Campbell [vs. Vasiliy Lomachenko] undercard [on August 31],” said Hearn. “I said to Dave, ‘Why are you about that fight?’ ‘Because I’m going to knock him [Price] out inside three rounds.’ We will see.”

Povetkin, 39, is out of Allen’s league in terms of talent. You can’t blame Allen for wanting to fight the 2004 Olympic gold medalist Povetkin, but it’s a match that he has very little shot at winning. Allen still needs to prove that he can beat the likes of Tony Yoka, Lenroy Thomas, Luis Ortiz and Dillian Whyte. All four of those fighters beat Allen with ease. Allen’s recent wins over lower level opposition has put ideas in his head, and now he believes he’s capable of mixing it with former world champion Povetkin.

Dave’s recent wins have come against former WBA ‘regular’ champion Lucas ‘Big Daddy’ Browne, Ariel Esteban Bracamonte, Samir Nebo and Nick Webb. Those are not good fighters. Browne, 40, is a one hit wonder with his upset tenth round knockout victory over past his best Ruslan Chagaev in 2016. Since that fight, Browne has looked poor in losses to Whyte and Allen. Browne’s six round points decision win over journeyman Kamil Sokolowski last March was controversial, as many boxing fans thought he was given a gift.

Sokolowski shockingly dropped Browne in the second round. As such, it wasn’t a big deal that Allen scored a stoppage win over Browne. Allen is essentially on the same level as Sokolowski in terms of talent. What sets Allen apart is he talks a lot of trash, and he’s promoted by Hearn. When you can stand on the shoulders of a popular promoter, you can see far.

Povetkin would be a bad match-up for Dave Allen

As much as you want to give a fighter like Allen a shot against Povetkin, it’s too much of a vast difference in skill level between the two. Povetkin comes from an extensive amateur background in Russia, and he’s fought the best. In contrast, Allen is arguably a ham & egger type of heavyweight, who didn’t have a great amateur background, and has been learning on the job as a pro.

At this point in Browne’s career, he’s easy prey for almost any domestic level fighters. You can’t blame Povetkin for being open to fighting Allen. Hearn is keeping Povetkin’s career moving without him needing to look in another direction for opponents. In Povetkin’s last two fights, he’s faced Anthony Joshua and Price. He lost to Joshua by a seventh round knockout last September at Wembley Stadium in London, and he hasn’t fought since.

Chisora will face Parker next if he beats Szpilka

Eddie also says that Dereck Chisora will face former WBO heavyweight champion Joseph Parker next if he wins his fight tonight against Artur Szpilka. If Szpilka wins, Hearn says he could face Oleksandr Usyk in his next fight.

“It’s a must win for both guys, if they want to mix it up at the big level,” said Hearn about the Chisora vs. Szpilka fight tonight. “Chisora against [Joseph] Parker, that’s pretty much a done deal fight [if Dereck wins tonight against Szpilka]. Szpilka against [Oleksandr] Usyk, maybe. It’s a really good heavyweight fight. I have no idea of which way it’s going to go either,” said Hearn.

Chisora (30-9, 21 KOs) is considered the favorite to defeat former heavyweight world title challenger Szpilka (22-3, 15 KOs) tonight in their 10 round match on the undercard of Whyte-Rivas at the O2. You can’t rule out an upset, but it’s likely Chisora wins.

Hearn recently signed Joseph Parker (26-2, 20 KOs) to his Matchroom stable, and he immediately set him up in a horrible fight against past his prime fighter Alex Leapai last June. Parker stopped Leapai in the 10th round, but it was a terrible fight to watch due to the one-sided nature of the contest. It’s difficult to predict a winner in a fight between Chisora and Parker. The New Zealand fighter is badly flawed, and doesn’t appear to be cut out for fighting at the upper levels of the heavyweight division. A win for Chisora wouldn’t be a shock, given how pedestrian Parker looked in his recent fights against Leapai and Whyte.