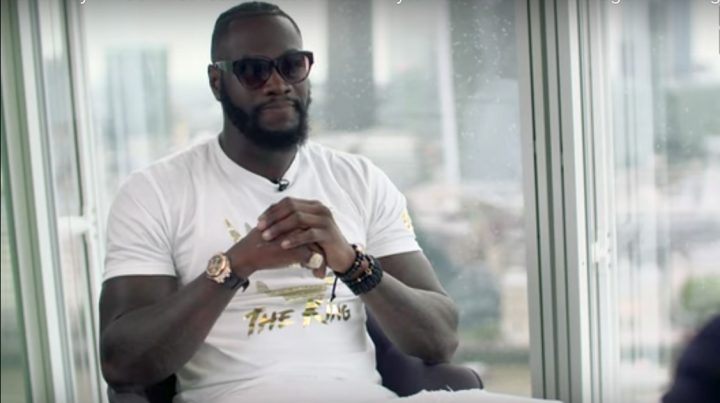 Whyte’s promoter Eddie Hearn said that Dillian was cleared to fight by UKAD.  Whyte (26-1, 18 KOs) won the fight by a 12 round unanimous decision to become Wilder’s mandatory challenger, but it’s unknown whether there will be repercussions from his alleged positive test. According to Wilder, Whyte’s team are waiting for the B-sample from his drug test for the Rivas fight. If the B-sample comes in positive, Wilder expects a huge lawsuit to erupt with people getting sued by Rivas.

Wilder says he heard that Whyte switched gloves in choosing to wear a different set of gloves for the Rivas’ fight, and the gloves weren’t inspected by his team.

“I’m still shaking my head,” said Wilder to BT Sport in commenting about Whyte’s alleged failed drug test. “It’s sickening at this point in time. It’s even more gross to hear about this kind of thing when we had two fighters that just passed away. That’s the last thing you want to hear. This is a bad time for this to come for him because of all the reports. The reports had more than one substance. The substance that he did have, it makes you very strong.  That’s one of the oldest drugs there is, and it makes you strong.

“To allow the fight to continue, them knowing he was under something , and still allow him to fight, there’s going to be hell for it,” said Wilder. “Somebody is in for a big lawsuit. Somebodies’ life could have been taken. That’s what Oscar Rivas, I think that’s what his mindset is. I heard Dillian didn’t even wear the same gloves that he chose . The Commission showed he had his own gloves, and that’s another thing they’re protesting against as well too. So it’s looking really ugly,” said Wilder.

We’ll soon find out what’s going on with Whyte’s alleged positive drug test for a performance enhancing drug. It may end up being a big fuss made over nothing. Whyte is the mandatory challenger now.

“I found it disgusting,” said Wilder in talking about Whyte’s alleged positive drug test for the Rivas fight. “He’d [Whyte] been crying, and talking about how many days he’d been mistreated by the WBC  by not being the mandatory. In reality, he had four opportunities to be mandatory. Dillian Whyte could have been the mandatory. He could have fought me if he wanted to, but he chose not to. He chose the long way around to try and go in and fight someone on some type of PEDs, and look what happened,” said Wilder.

It’s true that Whyte could have fought in a WBC title eliminator last year against Luis Ortiz, but there was likely more of incentive on his part to face British heavyweight Dereck Chisora. Whyte vs. Chisora II was a big fight last year, and Dillian made good money for that contest. If Whyte had fought Ortiz, who the British boxing fans aren’t familiar with, he would have likely made less money. Whyte made a decision to take the money fight against Chisora rather than face Ortiz in a WBC title eliminator. But Whyte still felt that the World Boxing Council should have made him the mandatory automatically without him fighting in a title eliminator.

“It’s been reported that he had more than one substance in his body. It was reported that these guys tried to hide this,” said Wilder. “They knew about it three days prior to the fight. They did not inform the WBC nor did they inform Oscar Rivas and his camp. This is very wrong. Now if his B-sample, if it comes back positive, which most likely it always does in following the A-sample, Matchroom and his team will be in a massive lawsuit against Rivas and his team doing that.”

Deontay is speculating at this point about Whyte’s B-sample, and he has no way of knowing whether it’ll come up positive. As far as Whyte’s promotional team not telling Rivas about the alleged positive test, it’s possible that there was nothing to tell. If this was  a false positive, then it would be nothing to tell.

“I then heard he [Whyte] switched gloves too. He didn’t have his gloves [that he originally chose],” said Wilder. “He had a different set of gloves, and to do that, if all this is true, it’s just disgusting. We have no room in boxing for this. This is his second time doing this [testing positive]. So what else is he going to make this time? He wasn’t aware it was up in his energy drink? What excuse now? It’s ridiculous. I think this is the worst time for this to pop up, especially for his career.

This is the worst moment, because we had two guys that passed away in boxing due to blows, and now you’re going in fighting some guy under the influence of some type of drug to allow your body to do something that it’s not actually supposed to do. Whatever comes to him, he deserves it. This is the second time he’s done this. Doing it three times, they should give him a lifetime ban,” said Wilder.

According to Dan Rafael, Whyte’s A-sample taken on June 17 by UKAD came up positive for the steroid dianabol. The B-sample still needs to be checked. Once the B-sample is checked, then UKAD will presumably decide their next move.

“It wasn’t like he failed the test and they said, ‘Don’t worry about it.’ They had a hearing.” said Whyte’s promoter Eddie Hearn to ESPN.com.

None of Whyte’s tests were positive through his June 15 test, says Rafael.

“I am so disappointed with the rubbish that has been said about me over the last few days,” said Whyte “I have lawyers dealing with it and I have been told that I can’t talk about it for good legal reasons. I was cleared to fight and I won that fight fair and square.”

It’s got to to be deeply upsetting for Whyte. He’s worked so hard to earn a title shot against WBC champion Wilder, and now he has to deal with all of this. It took Whyte over 600 days before he was finally made the mandatory for Wilder, and he wants his title shot. Once the B-sample comes back, then things should be clearer.