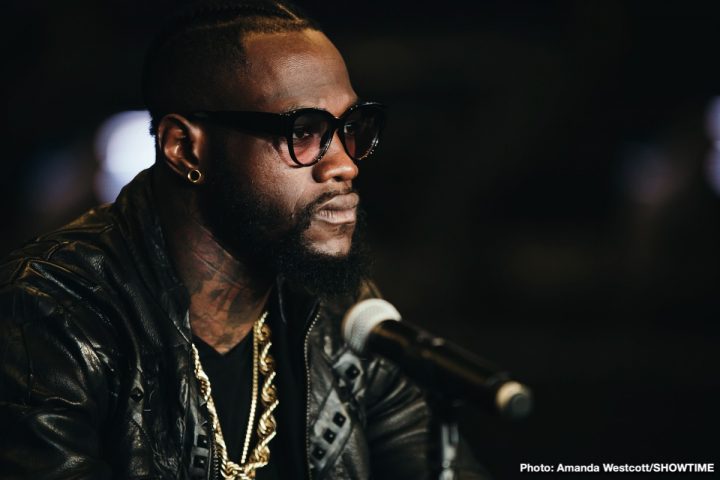 By Charles Brun: Deontay Wilder says he’s going to knockout Tyson Fury in their rematch after he finishes off former world title challenger Luis Ortiz first. WBC heavyweight champion Wilder (41-0-1,40 KOs) wants to close the chapter on his little rivalry with the ‘Gypsy King’ Fury (28-0-1, 20 KOs) by making sure the judges and/or the referee can’t take away his victory from him the second time around.

Wilder wants to unify the heavyweight division, but he first needs to take career of the highly talented Ortiz (31-1, 26 KOs) on November 9 in a rematch. Deontay stopped Ortiz in an exciting fight last year in March 2018 in a thrilling fight from start to finish at the Barclays Center in Brooklyn, New York.

“We move onto Ortiz first and, after I whup Ortiz in a great fashion and a quicker fashion, I will come back and get old Tyson Fury, and knock him out in dynamic fashion,” said Wilder to skysports.com.  “My time? It will come. I will be unified and undisputed heavyweight champion of the world.”

If Fury doesn’t fun from Wilder in the rematch, there’s a very good chance the tall 6’9″ British heavyweight is going to get destroyed in the first four rounds. Wilder has put on size since his match with Fury, and he seems to be packing more power now. When Wilder fought Fury, he weighed just 212 pounds. That’s basically a rehydrated cruiserweight. But in Wilder’s last fight against Dominic Breazeale, he bulked up to 223 pounds, and he looked more powerful than ever in stopping the 2012 U.S Olympian in the first round last May.

“It is not over for Anthony. Just because you lose, it doesn’t mean it’s over,” said Wilder. “Even if he loses the rematch, which I feel he will. I don’t think he knows how he lost. He was knocked down four times. He gave up, in my opinion. I wasn’t surprised [by the result].”

When Wilder fought Fury last December, he knocked him down twice, and appeared to knock him out in the 12th. The referee Jack Reiss gave a count to Fury despite the fact that he was laying on the canvas and looked unconscious. Fury somehow made it back to his feet, and was able to survive the round just barely. The judges scored the fight a draw, but a lot of boxing fans felt that Wilder was robbed of a knockout by the referee choosing to give a count to a fighter that was knocked out.

Deontay was almost knocked out by Ortiz last year. That fight was extremey close to being halted in the seventh round. After Wilder knocked Ortiz down in the fifth, the Cuban ace came back and hurt Deontay in the seventh round with a powerful straight left to the head. Ortiz then teed off on the badly hurt Wilder, and had him ready to be stopped.

Somehow, Wilder made it out of the round just barely. If there had been another 20 seconds in the round, Ortiz likely would have stopped him. As luck would have it, the start of the eighth round was delayed by the New York State Athletic Commission, who wanted to take a look at the wobbly Wilder. The little bit of delay might have been all Wilder needed to collect himself to recover from the previous round.