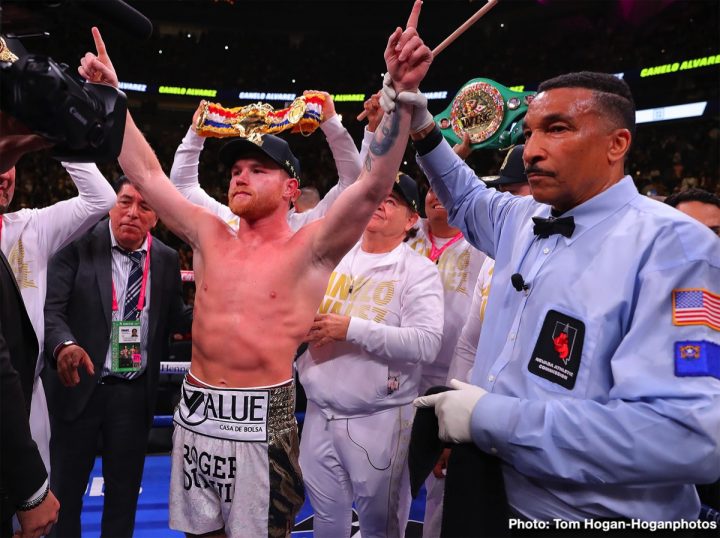 By Mark Eisner: Saul Canelo Alvarez’s promoters at Golden Boy hasn’t contacted Sergiy Derevyanchenko’s adviser Keith Connolly to indicate whether he’ll try to make a deal to avert an IBF ordered purse bid for July 23, according to @MikeCoppinger. It’s now looking like Canelo won’t attempt to make a deal with Derevyanchenko to defend his IBF title against him. This would mean that Canelo will be stripped of his IBF title by the International Boxing Federation for failing to defend it against the mandatory Derevyanchenko (13-1, 10 KOs).

If Canelo bows out of the picture, Gennady Golovkin and Derevyanchenko will be ordered by the IBF to fight for the vacant middleweight title. Golovkin’s promoter Tom Loeffler hasn’t said whether he would be interested in having GGG fight Derevyanchenko for the IBF title. There had been talk on Monday that GGG might fight Jaime Munguia next in October on DAZN.

That’s a fight that would interest a lot of boxing fans, and it would help bring in subscribers to the streaming company. Nevertheless, Golovkin could help his position in the negotiations for a third fight with Canelo by capturing the IBF title by beating Derevyanchenko. Canelo wants Golovkin to win a world title before fighting him again, and this would be the ideal way for him to do just that.

Earlier on Tuesday, the IBF ordered Canelo (52-1-2, 35 KOs) and Derevyanchenko, 33, to start negotiations for a fight. The IBF gave a deadline of July 23 for the purse bid if no deal is reached. With Canelo’s promoters at Golden Boy failing to contact Derevyanchenko’s adviser Connolly, it’s clear that they’re not going to comply with the IBF’s ruling. If there’s no desire on Canelo’s part to defend his IBF belt against Derevyanchenko, he can either vacate it or wait for the sanctioning body to strip him.

“Sergey Derevyanchenko adviser Keith Connolly tells me he hasn’t heard from Canelo side. “Sergey is excited by the prospect of fighting GGG for the vacant title, and if it ends up being another opponent, Sergey will look to unify with Jermall Charlo next year on a PBC platform,” said @MikeCoppinger.

Derevyanchenko’s adviser Connolly makes it quite clear that if GGG fails to fight Sergiy for the vacant IBF belt, they’ll face another opponent, win the title, and then look to face WBC champion Jermall Charlo next year in a unification fight. Charlo and Derevyanchenko are BOTH with Premier Boxing Champions [PBC]. The ramifications of this is obvious.

If PBC gets a hold of the IBF title, they would then have half of the four middleweight belts in the division. That make it difficult for Canelo, Golovkin or any other DAZN fighter to sell themselves as the #1 fighter in the middleweight division. They can’t do that if half of the titles are with one PBC fighter, which would likely be Jermall Charlo.

If Derevyanchenko wins the IBF title, he might be over his head against a young fighter like Charlo. It’s not a lock that Charlo would beat Derevyanchenko, but it’s likely that he would. Once Charlo has the IBF and WBC titles, Canelo and GGG are going to look silly saying they’re the best at 160. They won’t be able to say that with Charlo holding onto two of the four belts.

Charlo’s popularity will increase if he wins IBF title

Up until now, Charlo has been invisible in the eyes of a lot of casual boxing fans, because he didn’t hold a world title at 160. Now that Charlo has the WBC strap, it validates him in the eyes of fans. Winning the IBF belt will further enhance Charlo’s status as the #1 guy at 160. GGG can keep that from happening by fighting Derevyanchenko to keep the IBF title with a DAZN signed fighter. Canelo has the WBA belt, whereas Deremtrius, another DAZN fighter, holds the WBO title.

“A purse bid was ordered earlier today, but it’s widely expected Canelo will relinquish the IBF title, which would set up GGG-Derevyanchenko for vacant title. Sergey, like Charlo, is a PBC fighter. Derevyanchenko is promoted by Lou DiBella. If Canelo passes as expected, [GGG-Derevyanchenko] could be ordered next,” said @MikeCoppinger.

From Canelo’s perspective, it’s no longer important for him to hold onto the IBF title. His goal was to unify the middleweight division, but the WBC spoiled things for him when they appointed him their WBC Franchise champion last month. That’s not a title that can be won or lost through competition.

Canelo has no reason to defend IBF belt against Derevyanchenko

The WBC stripped Canelo of his WBC middleweight title, the traditional belt, and gave it to Jermall Charlo. So in essence, Canelo now holds two world titles at 160; the IBF and WBA. He can no longer unify the middleweight division, even if he beats WBO champion Demetrius Andrade. That’s why it’s pointless for Canelo to keep the IBF title by defending against mandatory Derevyanchenko.

There’s no gain in Canelo fighting Derevyanchenko. That’s not a fight that would bring in a lot of subscribers on DAZN, because Derevyanchenko isn’t well known in the U.S with the casual boxing fans. Derevyanchenko is also with PBC, which means the audience would be split if Canelo fought him. It wouldn’t be just boxing fans having to subscribe to DAZN to see the Canelo vs. Derevyanchenko fight. Fans could also watch the fight on PBC on FS1 and Fox Deportes. Canelo can make good money no fighting Golovkin, Jaime Munguia and Demetrius Andrade. There’s no reason for him to face Derevyanchenko, who brings less to the table than those guys.

Golovkin will have a chance to win back the IBF title he lost last year by failing to fight Derevyanchenko. There were a lot of boxing fans at the time that thought Golovkin chose not to fight Derevyanchenko, because he was afraid of him. The reality is, Golovkin was in negotiations at the time for his lucrative rematch with Canelo that took place last September. The IBF wanted GGG to defend against Derevyanchenko by August 4, which would have left him no time to prepare for the Canelo rematch. The IBF belt was sacrificed by Golovkin. He had no choice. He couldn’t keep it, considering that it would have meant that he would have lost the rematch with Canelo. That was the far bigger money fight for Golovkin.

This is an easy way for Golovkin to win back his IBF title. It’s not that Derevyanchenko isn’t a good fighter, because he’s talented. But he’s not in the same league as GGG or Canelo. We saw that recently with the way Derevyanchenko looked in losing to Daniel Jacobs last October, and barely squeaking by Jack Culcay by a narrow 12 round unanimous decision last April.

Jacobs open to fighting Charlo or GGG in 2020 says Connolly »