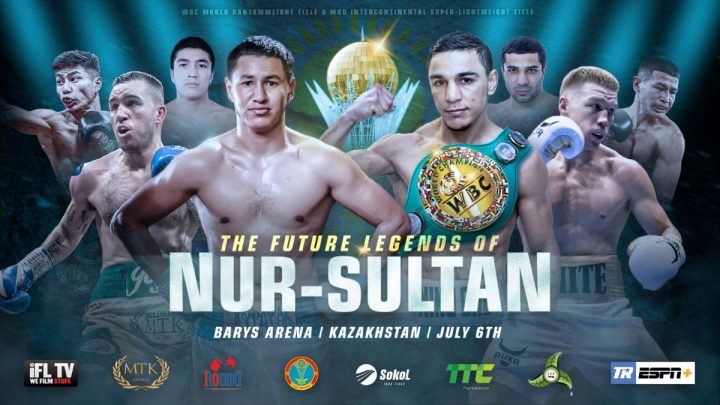 Two time Olympian Oubaali, 32, beat the over-matched Villanueva like a drum in knocking him down in round six. This was Oubaali’s first defense of his World Boxing Council title. He’s going to need to dramatically improve if he’s to make a second successful defense later this year.

After the round ended, the 30-year-old Villanueva opted not to continue fighting. The official time of the stoppage by referee Jose Guadalupe Garcia was 3:00 of round six.

The southpaw Oubaali battered Villanueva with nonstop shots from round one. There wasn’t much finesse to France’s Oubaali’s game, as he just attacked all out with shot after shot. It was like like watching former lightweight champion Ray ‘Boom Boom’ Mancini fight with the way Oubaali attacked without thinking about his defense. He was just throwing shots, and daring Villanueva to try and keep up with him. Fortunately for Oubaali, Villanueva isn’t a big puncher, because he left himself open for anything and everything the Filipino fighter was throwing at him.

Oubaali looked good, but not on the level of Inoue or Nery

All in all, it was a decent performance by Oubaali. He won the fight against a bottom ranked contender, but he wasn’t all that impressive considering who his management plan on putting him in with next. There’s talk that Oubaali will fight either former WBC bantamweight champion Luis Nery or WBA champion Naoya Inoue. What we saw from Oubaali tonight, he won’t stand a chance against either of those fighters in this writer’s opinion. Oubaali is still the same flawed fighter that was twice eliminated in Olympic action. He hits hard, but he’s not a huge puncher like Nery or Inoue, and he’s not skilled defensively like those guys are. Oubaali lacks the explosiveness with his shots for him to fight the way he tonight against Nery or Inoue. Those fighters would take Oubaali apart at the seams if he leaves himself open in the same way he did against Villanueva.

In another mismatch, undefeated light welterweight Zhankosh Turarov (24-0, 17 KOs) stopped an over-matched Argentinian Mauro Godoy (31-5-1, 16 KOs) in a third round stoppage to win the  World Boxing Organization Intercontinental title. The official time of the stoppage was at 2:00 of round three.

Turarov nailed the 29-year-old Godoy with a shot to the head to drop him in the third. Godoy got up, but was too hurt to continue. This was  mismatch in skills. Turarov looked a lot better than Godoy. It’s time for Turarov to step it up against better opposition already. He’s been a pro for 10 years, and he still hasn’t faced a contender. Turarov is still young at 28, but that’s old for someone that has never fought a contender. Maybe this is as good as it gets for Turarov wth him winning the WBO Intercontinental light welterweight strap.

Undefeated featherweight fringe contender Davey Oliver Joyce (11-0, 8 KOs) defeated journeyman Breilor Teran (27-18-1, 20 KOs) by a 10 round unanimous decision. The judges scored it for the 2016 Irish Olympian Joyce by the scores 100-89. 100-86, and 100-87. Boxing News 24 had Joyce winning by a 100-89 score.  At 32-years-old, Joyce needs to start fighting better opposition, because he’s pretty old to still be fighting journeyman level fighters like the one he fought tonight. With his Olympic experience, Joyce doesn’t need to be fighting weak opponents like Teran.