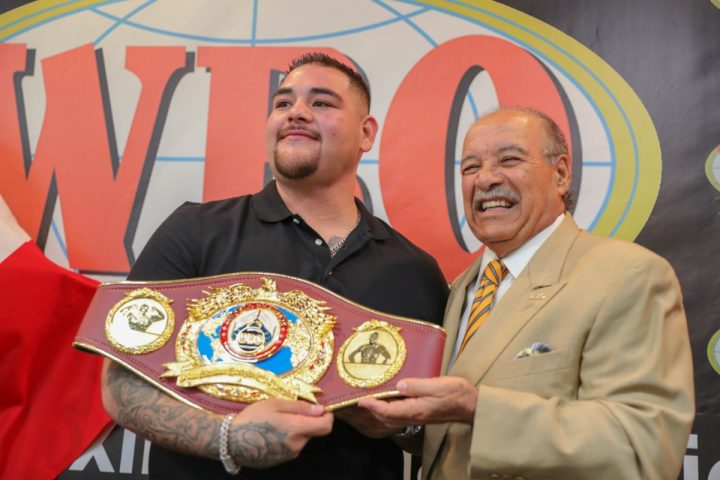 By Mark Eisner: Trainer Abel Sanchez wants Andy Ruiz Jr. to stop trying to be a superstar, and get back into the gym to start training for his rematch with Anthony Joshua. Sanchez thinks Ruiz Jr. (33-1, 22 KOs) has forgotten what got him to where he is with hard work, and a lot of training in the gym. Sanchez thinks that the fame hurt Joshua, and now the same thing is happening with Ruiz Jr.

Ruiz Jr., 29, is living the life of a minor celebrity ever since scoring a huge upset victory over IBF/WBA/WBO heavyweight champion Joshua (22-1, 20 KOs) last month on June 1 at Madison Square Garden in New York. Picked as a replacement for Jarrell ‘Big Baby’ Miller, Ruiz Jr. got up off the deck in the third round to go on and drop the 6’5″ Joshua four times before stopping him in the seventh round.

Since winning the fight, Ruiz Jr. has been doing a lot of interviews, and traveling in enjoying his newfound fame. Sanchez thinks Ruiz Jr. should be back in the gym working on improving his game so that he can beat Joshua in the rematch, which could take place in November or December.

“The things I’m saying is get his butt back in the gym, and stop being a superstar,” said trainer Abel Sanchez to Fighthype in his advice to Andy Ruiz Jr. “All those things come with time. He’s a great fighter, and he’s got good hand speed. He’s got a good chin. The trouble [Anthony] Joshua had is he became a superstar in the UK. Andy Ruiz needs to understand what got him there was boxing, not his looks.

“So if he stays in the gym, and gets back with Manny, and keeps working on the things that Manny is working with him on, and stays consistent with his training and running, I think he’s got a chance at winning. But if he doesn’t, Anthony Joshua is a very skilled fighter ;  I know he’s not taking this second fight lightly,” said Sanchez.

What Sanchez doesn’t understand is Ruiz Jr. is quickly becoming the next Saul Canelo Alvarez superstar in the United States. Like Canelo, Sanchez has a massive amount of fans that have jumped on board his train. Before Ruiz’s win over Joshua, he lived a humble lifestyle, as he wasn’t super wealthy. He was just a guy with massive potential who was hoping to one day hit it big.

Now that he’s beaten Joshua, the money and the fame is suddenly there, and it’s obviously difficult for Ruiz to go back to being the same blue collar guy he was before. As the saying goes, ‘money changes everything,’ and it certainly has for Ruiz. Even if he loses to Joshua in the rematch, he’ll make a mountain of money from the fight, and can retire off of it. Ruiz Jr. obviously won’t retire if he loses to Joshua, but he could wind up as just another one-hit wonder.

Some boxing fans are already comparing Ruiz Jr. to James ‘Buster’ Douglas, a fighter that pulled off a major upset of IBF/WBA/WBC heavyweight champion Mike Tyson in February 1990. Douglas’ career was never the same after that victory. He came back eight months later, looking soft at 246 pounds, and was stopped in the third round by Evander Holyfield in June 1991.  Douglas was never able to recapture the physical form that he showed at the peak of his career in stopping Tyson. Will we see the same thing happen to Ruiz Jr? That’s why Sanchez wants Ruiz Jr. to get back in the gym, because he’s not someone that can dominate without hard work.

Joshua needs to train like he used to says Sanchez

“In the UK, he became a superstar. He had his own plane, and his own limo,” said Sanchez about Joshua. Everybody wants to talk with you, and take you here and there. Sometimes you forget what got you there. What got him there was winning a gold medal, training hard for that, and training hard to win the title. He needs to get back to that. If he gets back to that, I see a 12 round hard fight, decision fight going to either guy,” said Sanchez.

Joshua’s problem’s go deeper than him needing to just train harder to recapture his world titles. He’s packed on a lot of muscle with his weight training since he turned pro in 2013, and he’s 20 to 30 pounds heavier than when he won the Olympic gold medal in 2012. Joshua weighed 225 pounds back then and he was able to throw a lot of shots without tiring. Now that he’s weighing between 245 and 254, he’s unable to throw sustained punches for even a fraction of a round without tiring out.

Once Joshua gasses out, he stays tired for three to four rounds before he gets his second wind. For Joshua to have a shot at regaining his Olympic form, he’ll need to lose a lot of muscle weight, and he’s not going to do that. Joshua’s punch resistance is poor.

“Gassiev will be making his debut at heavyweight,” said Sanchez about former IBF/WBA cruiserweight champion Murat Gassiev. “He’ll be fighting on the Hooker-Ramirez card in Dallas against Joey Dawejko. I think he’s the third up. That’s a tough fight. That’s a tough fight for the first time out at heavyweight. Joey has some losses, but he’s never been stopped. He quit on his stool, because he wasn’t in shape in his fight against Charles Martin. But he’s fought a lot of young heavyweight prospects. He’s given them hell. He’s a tough fight. That’s the way it should be. If you’re going to make inroads in the heavyweight division, that’s a great test,” said Sanchez.

Former IBF/WBA cruiserweight champion Murat Gassiev (26-1, 19 KOs) will be making his heavyweight debut this month against the hard hitting Joey Dawejko (19-7-4, 11 KOs) in a 10 round scheduled fight on the undercard of Maurice Hooker vs. Jose Carlos Ramirez at the College Park Center, in Arlington, Texas. The fight card will be shown on DAZN in the U.S, and Sky Sports in the UK. Gassiev, 25, is fighting for the first time since his loss to Oleksandr Usyk in the final of the World Boxing Super Series cruiserweight tournament 12 months ago in July 2018. Gassiev had shoulder surgery to repair an injury, and he’s now ready to campaign as as a heavyweight. Sanchez believes the new weight class will work well for the 6’3″ Gassiev, who was a monster at cruiserweight.

“Nobody has denied it, so I don’t know if it’s true or false,” said Sanchez about the rumors of Dawejko knocking Joshua down in sparring. “I’ve had guys spar with him down at Freddie’s, and I know how good of a fighter he is. Like I said, if you’re going to make inroads in the heavyweight division, you might as well step all the way in. Towards the end, he’ grown up, he was getting older, and it was getting more difficult to not only make the weight, and more difficult in camp, because of the kind of sparring we had to have for him. We had to have heavyweight there all the time, because cruiserweights couldn’t be in there with him. And then there were injuries he had going into the [Oleksandr Usyk] fight,” said Sanchez.

Gassiev is going to need to be busy against Dawejko if he doesn’t want to get blasted out by him. Dawejko is a big puncher too, and he’ll tee off on Gassiev all night if he’s as economical with his punches as he was against Usyk and Yuniel Dorticos in the WBSS tournament. Gassiev needs to let his hands go in every round, because his power isn’t going to be as devastating at the heavyweight level as it was at cruiserweight.

Gassiev weighing around 225 lbs. in preparing for Dawejko fight

“Hopefully now at heavyweight, the struggles won’t be as bad,” said Sanchez. “He’s had the operation on his shoulder, so he should be 100 percent on the 27th. He’s been consistent in the gym right now since he came. From 222 to 225, he’s stayed right at that range. That’s a good weight. He’s a good fighter, and he’s got a good chin. I know, because I had him in against Joseph Parker,” said Sanchez.


« “Canelo” Alvarez vs Sergey “Krusher” Kovalev: Why it needs to happen and why it might not

Khan reacts to Pacquiao’s denial of a signed fight »