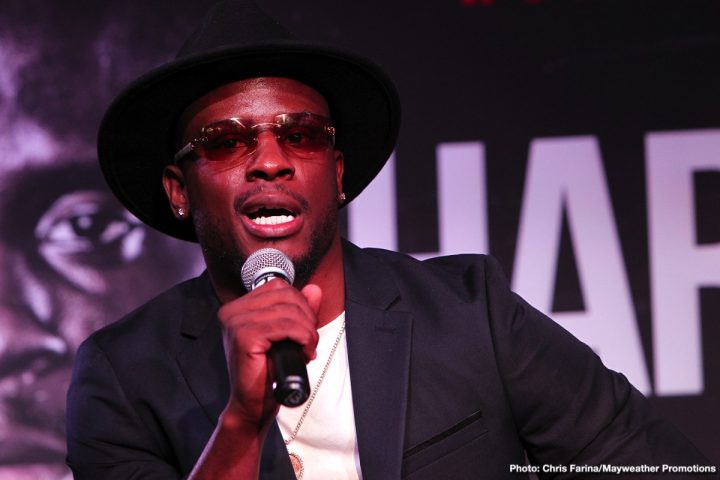 By Kenneth Friedman: Tony Harrison has reportedly suffered an injury, and has pulled out of his rematch against former WBC junior middleweight champion Jermell Charlo, according to Mike Coppinger. The Harrison-Charlo card will still be taking place on Premier Boxing Champions on Fox on June 23 at the Mandalay Bay Resort & Casino, in Las Vegas, Nevada. Harrison suffered an ankle injury.

Charlo may stay on the card. They’re looking for a replacement, but it obviously won’t be a world champion that he’ll be facing. We’re probably talking fringe contender or a journeyman level opponent, given the short notice. You can forget about WBO junior middleweight champion Jaime Munguia taking the fight with Charlo. He’s not going to take a fight against Charlo, who doesn’t fight on DAZN, on short notice.

It’s unknown at this time what undercard fight will be moved to the main event to take the place of the Harrison vs. Charlo rematch. It’s likely the WBC super bantamweight title eliminator between former 122-pound champion Guillermo Rigondeaux (18-1, 12 KOs) and #1 WBC Julio Ceja (32-3, 28 KOs) will be moved to the main event. This isn’t a great fight for the main event. Rigondeaux is 38-years-old, and has fought only since since being stopped by Vasiliy Lomachenko in the sixth round in December 2017. A lot of boxing fans thought the two-time Olympic gold medalist Ringondeaux quit in that fight.

Since that loss, Rigondeaux bounced back last January in defeating journeyman Giovanni Delgado (16-9, 9 KOs) by a first round knockout. Ceja, 26, is a lot younger than Rigondeaux, but he’s coming off of a fourth round knockout loss against Franklin Manzanilla last May. It would seem that Rigondeaux and Ceja are two fighters that hardly deserve to be competing in a World Boxing Council 122-pound title eliminator given their recent problems inside the ring.

Harrison (28-2, 21 KOs) defeated Charlo (31-1, 15 KOs) by a close 12 round unanimous decision on December 22 at the Barclays Center in Brooklyn, New York. A lot of boxing fans thought that Charlo had done enough to get the win, but the judges were more impressed with how Harrison was controlling the fight with his jab for the entire 12 round fight. Charlo, 29, was loading up on his shots all night, trying to score a one-punch knockout.

Although he landed some big punches from time to time, Charlo was mostly missing badly, and looking one-dimensional against the more well-rounded, technical Harrison. It was one of those fights in which you have to decide whether you like the occasional hard punches that Charlo was landing more or the technical brilliance that Harrison was showing. He looked like he was in control of the fight.

Coppinger said this on his social media about Harrison pulling out of the card:

“Tony Harrison is injured and has withdrawn from June 23 junior middleweight title rematch vs. Jermell Charlo. FOX will still televise show from Vegas on June 23 that includes 122-pound eliminator between Guillermo Rigondeaux and Julio Ceja. Main event undecided. It’s unclear at this time if Jermell Charlo will remain on card against new opponent or if fight with Tony Harrison will be rescheduled for next outing. Charlo was controversially outpointed by Harrison in December.”