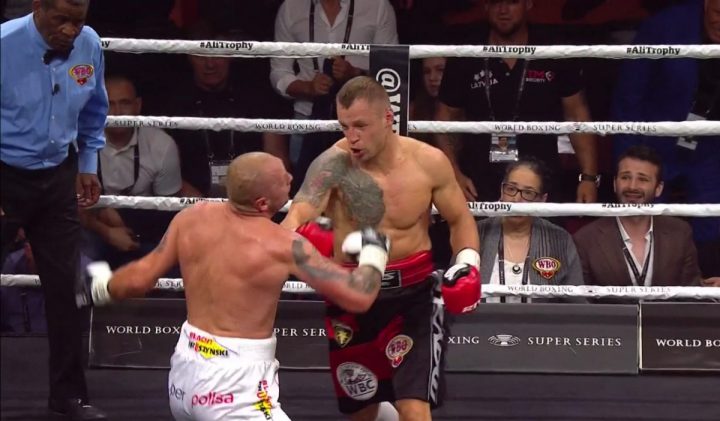 By Dan Ambrose: Krzysztof Glowacki and his team are appealing his third round technical knockout loss to Mairis Briedis from last Saturday night in their semifinal match in the World Boxing Super Series cruiserweight tournament at the Arena Riga in Riga, Latvia.

Glowacki (31-2, 19 KOs) came into the fight with the 34-year-old Briedis as the WBO cruiserweight champion, and with a good shot at winning the fight. Things quickly fell apart for the powerful southpaw Polish fighter Glowacki when he was elbowed in the jaw by the Latvian Briedis (26-1, 19 KOs) in round two. Glowacki went down face first on the canvas, clutching his jaw, and looking in great pain.

Briedis vs. Glowacki fight quickly spun out of control

The referee Robert Byrd did the right thing in docking a point from Briedis for the flagrant foul. What led up to Briedis elbowing Glowacki was the Polish fighter hitting him with a rabbit punch to the back of the head. It’s debatable whether Glowacki intentionally targeted the back of Briedis’ head when he threw the punch, because at the time, Briedis was ducking low.

“It is hard to accept such a situation,” Glowacki said to Ringtv.com. “I would never expect an elbow. I have never fought anyone who would fight like that. I was not interested in acting. I wanted to continue and win this fight…I do not remember a lot after that. I did not hear anything. I was trying to take my chance in a direct war.”

Glowacki got back to his feet, and was quickly dropped by Briedis, who took advantage of the WBO champion opening himself up for his big punches by fighting wildly. It’s unclear whether Glowacki was still stunned from the elbow to the jaw. If he was still light-headed from the shot, then that would help explain why he fought so carelessly after he got back to his feet. You have to take Glowacki’s word that he never fully recovered from the elbow to the chin. Glowacki didn’t expect that Briedis would hit him with an elbow, and didn’t have a chance to brace for the blow.

Byrd failed to hear the bell

The referee Robert Byrd didn’t hear the bell sound to end the second round, and both fighters continued to fight. Briedis then knocked Glowacki down a second time in the round. Byrd, who still hadn’t heard the bell, looked like he was stopping the fight, as Glowacki was badly hurt. When Byrd realized that the round had ended, he had both fighters go back to their corners. Glowacki didn’t look like he recovered fully in between rounds, as he was too hurt to put up much resistance at the start of the third.

Byrd stopped the fight at 0:27 of round three after Briedis hurt Glowacki again.

It wouldn’t be surprising if the fight results are overturned on appeal and it’s ruled a no contest. That would obviously be bad news for the World Boxing Super Series tournament, but given the situation, it makes a lot of sense for that to happen. The Glowacki vs. Briedis fight arguably needs a do over.

One option is to have Glowacki fight Briedis-Dorticos winner