Joshua Unravels Under the Big Top 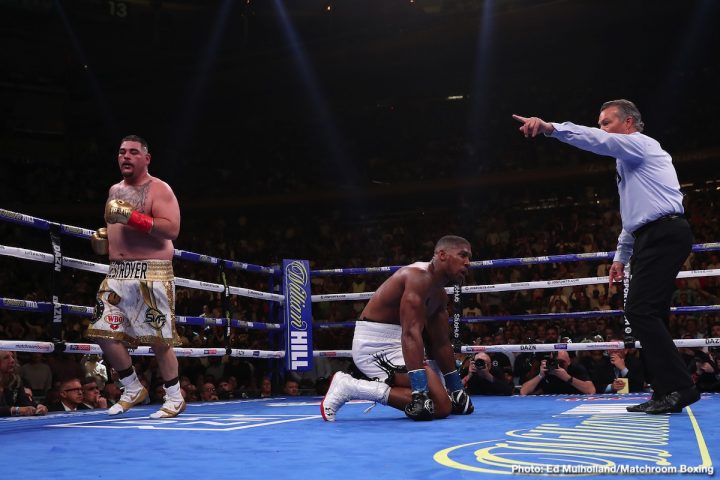 By Sean Kingsley: Everyone loves Anthony ‘AJ’ Joshua’. He’s a sincerely nice guy and a terrific ambassador for global sport. But as the historic humiliation at Madison Square Garden in the dark hours of June 1st will forever show, he’s also an over-hyped and fundamentally flawed boxer.

This was supposed to be AJ’s US coming out party, a showcase to put the fear of god into Deontay Wilder, Tyson Fury and Luis Ortiz. We’re coming to get you was Matchroom’s battle cry. Now everyone and their dog knows where AJ’s Achilles heel lies.

Only in the good old US of A do dreams like this come true. Fed on a diet of Snickers for power bars and no doubt Coke for energy drinks, the endearing 19 stone 2 lbs Andy Ruiz Jr. made a mockery of his 25/1 underdog tag to school AJ in heart and the art of deception to shock the world. June 1st was national maritime day in Mexico. Ruiz took Joshua into waters he didn’t need or want to swim in.

The brutal difference between Team Ruiz and Team AJ was that the Mexican with Crunch bars in his fists knew his limits and worked to his strengths on the back of a 110-fight amateur pedigree, 105 won. He’s comfortable in his own skin. AJ still looks like a foreigner in body and mind.

His 40 wins and three losses in the amateurs and a perhaps lucky gold in the 2012 London Olympics were backed up as a pro by a rapidly won USP reputation as a specialist knock-out artist, until last night boasting 21 KO’s from 22 starts. In his early fights, like a marauding Mike Tyson, many AJ opponents – typified by the clown prince Charles Martin – were beaten before the bell rang or like Joseph Parker in March 2018 too hesitant and too respectful of the big man’s one punch power.

It’s sad to say for such a genuinely like-able guy that Joshua has looked a disaster waiting to happen for some time. Getting buzzed by Dillian Whyte in 2015 was followed up by being within seconds of ending up counted out at the steelhammer hands of a veteran 41-year-old Wladimir Klitschko in 2017. In June 2018 a 38-year-old Alexander Povetkin had AJ in all sorts of trouble before the Londoner came up with a get out of jail card.

On the June 1st Madison Square Garden fright night, AJ turned into a robotic automaton. For sure his mind was in the wrong place, distracted by Wilder’s team winning the PR battle by announcing his next two fights with Luis Ortiz and Tyson Fury and stealing Joshua’s thunder, a blitz of politician-like interviews and worrying way too hard about being all things to all people.

The alarm bells that started ringing a few days before the fight turned into a tsunami warning in the ring on Saturday night. It’s an open secret that AJ loves his home comforts, which he’s 100 per cent earnt by consistently selling out 90,000-seat UK arenas – and it looks like he travels badly.

The admission that Joshua had taken lessons (in what, survival?) from a US Navy Seal and that his team weren’t interested in Andy Ruiz’s style, only focused on AJ’s self-development, bears all the hallmarks of a la-la land pop star detached from reality. The man with a Greek god’s physique, the gift of a diplomat’s gab and north of £49 million in the bank has found himself in a bubble. Hardly surprising he’s desperate for human contact with the fans.

AJ may dearly love chess, but he’s no millennial version of a Lennox Lewis. In fact, the embarrassing sound bites heard between rounds on June 1st have dropped a massive question mark over Joshua’s boxing IQ. Ruiz’s strategy wasn’t rocket science: he does what it says on the tin film reels of his last 33 bouts. Pressure, fast fists, medium power.

This could have been an easy fight for AJ: work the belly, let’s be honest a flabby whale of a target, keep the Mexican at arm’s length with a double jab and tee him up for an A Bomb. Not only was Joshua lethargic and seemingly drained of strength and energy, he looked to have been terribly prepared or unable to take instructions. An incredulous Robert McCracken and AJ sounded as if Ruiz had somehow reinvented the wheel. What’s he going to do next, Joshua asked between virtually every round.

It’s hard to be picky with a man of AJ’s stature, substance and achievement, but a lot seems wrong in Camp Joshua, much of it psychological. He just didn’t look happy at any stage on Saturday night. Detail is crucial to get prepared. Obsessing about becoming the best version of yourself, rather than adapting to beat the next challenger, starves the mind of the flexibility to expect the unexpected and react when the going gets tough. If you want to master self-identity, go hike in the Himalayas and meet the Dalai Lama.

Joshua has been made to overthink and left blinking under the bright lights. Fame, power and riches will do that. The second problem with perfectionism and control freakery is that when things don’t go to plan the wheels fly off the juggernaut. Both came to pass on June 1st.

It’s also just possible that like a mentally frazzled Mike Tyson in 1990, who maybe wanted out at the hands of Buster Douglas, a guzzler like Ruiz who once claimed to dine out on 28 Big Macs at a time, AJ was ready and maybe willing to fall. Unlike Tyson, the crippling business pressure of being Sky and the new DAZN platform’s golden goose, were too much to bear.

Where Joshua goes from here is hard to see. Sad but true, he’s been found out. The bubble has burst. The template how to conquer him, and pretty easily, is out. Wilder, Fury, Ortiz and Whyte all have the technical dynamite and boxing savvy to repeat the Ruiz upset, comfortable in the knowledge AJ has a low-energy tank that gasses out after around four rounds and that, ultimately, he can’t take a shot.

The over-respectful ‘yes sir, no sir’ between rounds conversation with coach Rob McCracken, and insistence on working inside the comfort of the Team GB Olympic setup as a pro, also gives the impression Anthony Joshua has not been given the space to develop as a rounded man.

As refreshing as it is, he lacks the instinctive animalistic arrogance of a Wilder and Fury as well. When the Bronze Bomber grimly warns he wants a body bag on his record by taking on a mediocre Dominic Breazeale, it shows what a deep fear of losing he has. He doesn’t really mean it. The threat serves as a necessary release valve to deal with fear and pressure. The respect between Joshua and Ruiz, and lack of schoolyard trash talking, in the lead up to June 1st may have been refreshing, but nice people often end up coming second.

If AJ is serious of re-conquering new heights, there may be no choice but to drop McCracken for a nasty mother of a coach, not a father figure. None of that is going to buy him punch resistance and fighting intuition though. As much as I hope I’m wrong as a real fan of AJ the man and the boxer, my heart tells me the second coming of Joshua and Andy Ruiz – a jellybean freak of nature with a crazy engine, speed, accuracy and resolve – will end up exactly the same. Joshua is too mechanical to change. I do believe he has the heart of a lion, but he doesn’t have the eye of the tiger.

Good luck to Ruiz. It’s a stunning story, great for boxing, Mexico and chocolate. The fighter with an insatiable sweet tooth has just won Willy Wonka’s golden ticket. Meanwhile, Matchroom’s hand on the bank vault is just starting to lose its grip. A terrific card. Still, the kid wonder Josh ‘Pretty Boy’ Kelly earnt a humbling lesson in boxing versus posing and Katie Taylor looked as shocked as anyone to be given the nod over the excellent Belgium whirlwind Delfine Persoon. America won the night. The UK heads home with a bloodied nose to regroup.