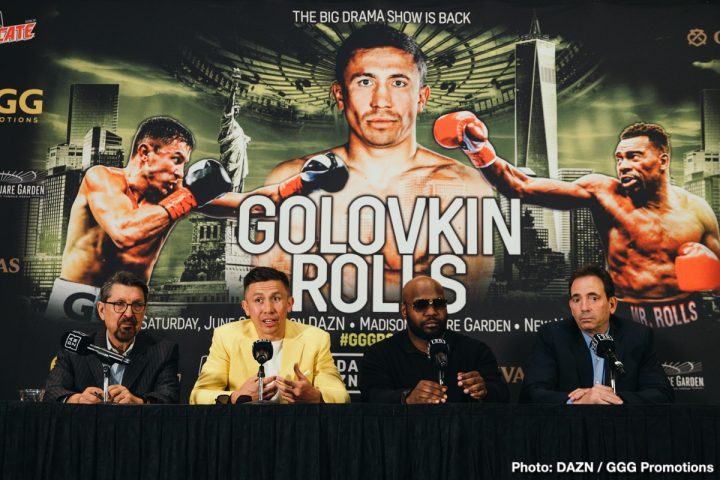 By Sean Jones: Gennady Golovkin will be returning to the ring this Saturday night on June 8 to face unbeaten Steve Rolls on DAZN at Madison Square Garden in New York. Golovkin (38-1-1, 34 KOs) is in a must-win situation against Rolls after losing his last fight against Saul Canelo Alvarez on September 15.

Golovkin, 37, has a new trainer now in Johathon Banks, who wants him to focus on throwing two to three-punch combinations, and stop looking for one single big shot the way he’s always fought. Whether Golovkin can change his fighting style at this point in his career remains to be seen. If he can’t, then he’ll lose to Canelo, and he might even get beaten by Rolls. The blueprint is out there now in how to beat GGG. Come forward, back him up, and outwork him.

What Banks ultimately wants is Golovkin to fight at a faster pace than he’s been fighting. He lets his opponents get too many rest breaks from his pressure. GGG also has picked up a bad habit of backing up when he’s pressured. Golden Boy Promotions CEO Oscar De La Hoya observed this flaw in Golovkin’s game many years ago, and never fixed it. GGG let Canelo back him up, as well as Daniel Jacobs. That’s what ultimately made those fights close. Golovkin backed up against physically weaker fighters than himself. GGG cannot do that against Steve Rolls on Saturday if he wants to impress the fans, and the win over of the judges.

Banks believes Golovkin can knockout Canelo in the future if he attacks him with nonstop shots.

“I’ve got mixed emotions about the fight,” said Banks to Fighthub in talking about Golovkin’s loss to Saul Canelo Alvarez last September. “I don’t have a gripe about it. Whatever the judges thought, they thought. I personally don’t like the way GGG fought. Either one,” said Banks when asked specifically which of GGG’s two fights with Canelo that he had problems with how he fought. “I don’t like the way he fought in either one, especially in the second one. As the bigger man, if you and me [Banks referring to the interviewer] were to get in a fight, physically I’m bigger than you. Let’s say were to meet at 205. I’m still physically bigger than you. If I allow you to back me up, that’s going to look bad on me, and I think that’s what GGG did [against Canelo].”

Banks is correct with his analysis of what went wrong for GGG in his two fights with Canelo. Golovkin fought at the slow pace that Canelo needed for him to get his rest breaks. Counter punchers need rest breaks. They’re only good at handling one or or two punches at a time. When they get attacked by guys that thrown nonstop punches the way that the late Aaron Pryor used to do, their form falls apart, and they crumble. They lose power on their shots, and they get ragged. A counter puncher like Canelo cannot handle nonstop punching. Canelo also can’t deal with being jabbed from the outside, but the judges aren’t likely to give Golovkin a decision against a popular fighter like him. We saw that in the first fight. As such, Golovkin has to get in the trenches and unload on Canelo with shots until he falls over.

In Golovkin’s two fights with Canelo, only in the last 15 seconds of the first contest did he unload with nonstop shots. When Golovkin did that, Canelo looked ragged, and was stumbling at the final bell. Canelo was red-faced and clearly couldn’t fight much longer at that fast pace. It’s hard to believe that Golovkin’s previous trainer Abel Sanchez didn’t spot that flaw in Canelo’s game to have him use a fast pace approach to the rematch. It was a mistake on Sanchez’s, as well as GGG’s not to see that flaw in Canelo’s game. He cannot handle a fighter that throws nonstop punches.

Banks: GGG wasn’t ready for a physical fight against Canelo

“I don’t think he [Golovkin] used his jab enough in my opinion,” said Banks. “I don’t think he threw more than five body shots in the 12 rounds. So, I think he was looking for one punch or two punches. He wasn’t looking to make a fight out of it. He wasn’t looking to be really aggressive and fight. I think if GGG had come and been ready for a physical fight, like he said he was, like the Mexican style fights, if he had fought like the Mexican style that he say he likes to fight, I think it would have been a totally different story,” said Banks.

This Saturday, Rolls, 35, is going to be looking to take advantage of the same mistakes that Golovkin made in his fights with Canelo and Jacobs. Rolls will be looking to back GGG up, make him look like he’s giving ground, and then force a physical fight. Golovkin talks about wanting to fight in the Mexican style, but he’s still fighting with the same Eastern European style that he used in the amateur ranks. All that time with his old trainer Abel Sanchez failed to make a change in GGG’s old style that he used in the amateurs. Golovkin doesn’t like to stay in the trenches. He backs up when pressured, and he doesn’t throw nonstop punches that he needs to for him to beat guys like Canelo and Jacobs. Golovkin was beaten in the final of the 2004 Olympics by a Russian fighter that was letting his hand go. Golovkin spent most of the fight trying to wrestle with the Russian fighter instead of throwing punches. That’s why he lost

“So, I think if GGG makes Canelo fight at a faster pace, he could catch him and knock him out in six rounds,” said Banks. “I think GGG can if he makes him fight at a faster pace. You have to up the tempo, meaning as soon as you come to him, and he meets you in the center of the ring, you’ve got start throwing more than one [punch at a time]. You’ve got to throw two to three punches at a time. If you throw two to three punches at a time, Canelo has got a lot of competitiveness in him. It’s going to make him punch back, and that’s how you’re going to be able to catch him when he makes a mistake,” said Banks.

Banks is trying to get Golovkin to throw multiple combinations so that he can wear down his opponents with his heavy shots, and his pressure. Golovkin should have been fighting like that years ago. He wastes time looking for one shot, which he often misses. Counter punchers like Canelo thrive on fighters that load on single shots, and fight at a slow pace the way Golovkin does. That’s why Canelo was able to have the success that he did. Golovkin accommodated Canelo by fighting at a slow pace, throwing one shot at a time, and getting countered frequently.