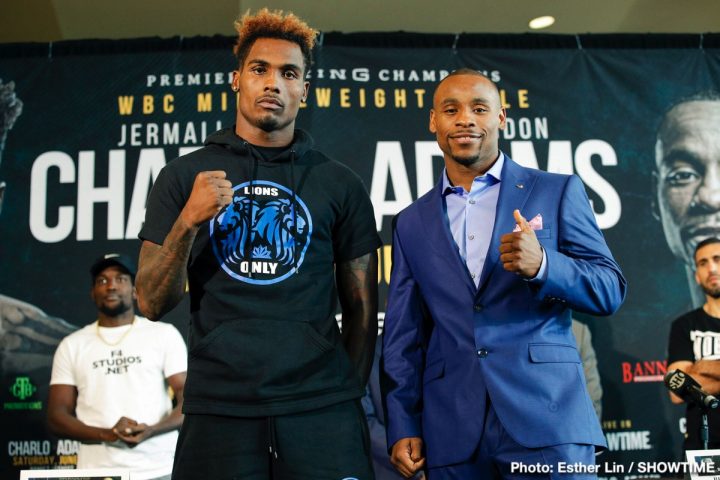 By Dan Ambrose: Jermall Charlo was less than impressed with Saul Canelo Alvarez being appointed a new ‘WBC Franchise’ middleweight title by the World Boxing Council. Charlo doesn’t undertand how Canelo could just give up his WBC title without fighting him. He feels that Canelo has the bigger title with his promotion to the WBC Franchise middleweight champion, and he wants to take it from him as soon as possible.

Charlo not happy with Canelo skipping him

Even though the WBC upgraded his interim middleweight title to the full WBC 160-pound belt, Charlo says he doesn’t like how Canelo “skipped” him, and avoided defending his WBC middleweight title against him. Charlo is now going to put pressure on Canelo to face him. Jermall is a little unclear on the significance of Canelo’s WBC Franchise belt. This isn’t a new title that can be won by him. It’s something has to be given through years of winning, loyalty and dedication. Charlo won’t capture the belt by beating Canelo. Someone needs to let Charlo know that so he doesn’t waste hist time.

He says Canelo can’t hide behind a network with him competing on DAZN. He still wants the fight with him.

Charlo will be defending his WBC middleweight title this Saturday night against #12 WBC Brandon Adams (21-2, 13 KOs) LIVE on Showtime, presented by Premier Boxing Champions at the NRG Arena in Houston, Texas.

“I was like, where’d Canelo go? How can he just skip me and leave the belt like that? Canelo has the bigger belt? Well, that’s the bigger belt I want now,” said Charlo to the boxing media on Thursday in talking about Canelo.

What Charlo needs to understand is he can’t force Canelo to fight him. He’s been given the WBC Franchise middleweight title by the World Boxing Council, and that belt doesn’t have mandatory requirements. As such, Canelo is free to fight whoever he wants to. The only way Charlo is going to get a fight against Canelo now is if he WANTS to face him. Apart from that, Charlo, 29, is powerless to force Canelo (51-1-2, 35 KOs) to face him.

Charlo needs to play it nice with Canelo

It would be a good idea for Charlo to talk nice about Canelo, because if he irritates him, he could be put on permanent ignore by the Mexican star. Trash talking is no guarantee that Charlo (29-0, 21 KOs) will be able to coax Canelo into fighting him. The two fighters are at vastly different levels when it comes to their popularity. Canelo is a star, whereas Charlo has small fan base that he’s slowly building. Facing lesser fringe contenders like Brandon Adams isn’t going to help Charlo increase his popularity to any extent.

“Eventually when I continue to do what I’m doing, hopefully I’ll become a Franchise champion too,” said Charlo. “We’re both at the same age, but probably at different levels in life. But at the same time, I’m ready to fight whoever is out there that says they’re the best,” said Charlo.

Charlo might be kidding himself by saying he’ll eventually become a ‘Franchise middleweight champion’ like Canelo. What’s working against Charlo is his age. He’s the same age as Canelo, and yet he’s accomplished so much less than him with his career. Canelo is a three division world champion. Charlo has won world titles in two weight classes, but he’s fought fewer notable fighters. These are the best names on Charlo’s resume:

Charlo should have done a lot more with his career by this point.

Many boxing fans thought Charlo deserved a loss in his last fight against 36-year-old southpaw Korobov last December. Charlo was given a highly questionable decision over the 2008 Russian Olympian Korobov.

Charlo criticizes Canelo for not fighting him

“I’m the new WBC world champion,” said Jermall. “Normally a champion doesn’t want to fight his mandatory’s, and he gets stripped of his title. But at his level, Canelo has done a lot for the WBC, and they want to keep him as their champion. So they made him a new belt and called him their Franchise champ. In being elevated as the new champion, where is Canelo?” said Charlo.

Canelo has other things he wants to do with his career rather than fighting little known champions like Charlo. Right now, Canelo has the option of picking between these fighters for his next contest in September: Golovkin, Callum Smith, Sergey Kovalev and Demetrius Andrade. Those are all tough opponents for Canelo, but he’s willing to face them in order to show that he wants to cement his legacy in boxing. You won’t see Canelo fighting someone like Brandon Adams. Canelo is intent on fighting the best.

Charlo wants the other world champions at 160

“Al was like, ‘you’re the champion now,'” said Charlo about Al Haymon announcing the news to him that he’s the new World Boxing Council middleweight champion. “It’s not over yet. There are other belts out there in the division that I can capture, and I’ll get that soon,” said Charlo.

For Charlo to get a crack at the IBF and WBA middleweight belts, he’ll need Canelo to agree to fight him. Charlo can’t force that fight, because he’s not the mandatory for Alvarez. Likewise, Charlo can’t force WBO champion Demetrius Andrade to fight him either. Andrade is signed to DAZN, and is promoted by Matchroom Boxing USA. The fights that Andrade is interested in are matches against Canelo and Golovkin. Andrade (27-0, 17 KOs) hasn’t spoken of wanting to fight Charlo, and he likely won’t start anytime soon.

“I would love to fight Canelo. Everybody in the world knows that,” Charlo said. “I’m not dodging fighters. I’ll fight all my mandatory’s. It’s a trophy. It’s a belt that sets up other fights in the future. I want to become one of the best fighters out there. The only way I can do that is by fighting the best,” Jermall said.

Good things come to those who wait. As long as Charlo keeps winning, and stays patient, he might get a fight with Canelo in the future. Charlo (29-0, 21 KOs) will need to perform a lot better than he did in his last fight against Korobov if he intends on holding onto his WBC title long. He was wild against Korobov, and fought a lot like his twin brother Jermell Charlo. The two of them both deserved losses last December. Jermall got a gift, whereas Jermell lost to Tony Harrison.

“For sure, I want to because there would be a unified middleweight champion,” said Jermall. “I want to do the things that Roy Jones Jr. done and Bernard Hopkins done. I want to make those my goals. They know I want to fight them [Canelo, Gennady Golovkin and Demetrius Andrade]. I’ve done enough calling out in my career. There are no difficulties, because you can’t hide behind a weight division or network or a title or anything like that, because boxing is boxing,” said Jermall is saying that it’s not a problem that Canelo is with DAZN.

Charlo might want to pretend that the networks aren’t an obstacle to him getting fights against the top middleweights at DAZN, but that’s simply not true. With Charlo lacking a big fan base, it’s not in the best interest for Canelo, Golovkin and Andrade to fight him in a dual network fight. Until Charlo can raise his profile, he’s not going to get them to face him. Charlo might want to consider moving up to 168 and 175 to fight the better names in order to increase his popularity. If Charlo moved up to 168, and beat Callum Smith and David Benavidez, it would help his career. Further, Charlo could move up to 175, and take on Artur Beterbiev, Oleksandr Gvozdyk, Marcus Browne, Dmitry Bivol or Sergey Kovalev. Wins over those guys would help make Charlo a bigger name.

“The best should fight the best, and that’s what I’m here to do,” said Charlo. “I’m a way better fighter than when I fought Matt Korobov. We all deal with adversity, and that’s sometimes something I have to deal with in a fight. It took me a little while to shake it out, but I made sure I got the win,” said Jermall.

How can Charlo say for sure that he’s improved since the Korobov fight when he still hasn’t fought? The only way Charlo can say he’s improved is by fighting someone good, and beating them impressively. The unfortunate thing about Charlo fighting Adams is he’s too weak of an opponent to get a good gauge whether he’ll have improved or not if he beats him impressively. Adams was knocked out in the second round by John Thompson in 2015. This is the same Thompson that Liam Smith stopped in the seventh round in October 2015. Adams was also beaten by Willie Monroe Jr. In the eyes of some boxing fans, Charlo is scrapping the bottom of the barrel in facing Adams.

“My prediction is if he makes the wrong move early, I’ll take him out early,” said Jermall about Adams. “If he can last and make the right moves in the beginning, maybe we can roll to the middle of the fight,” said Charlo.