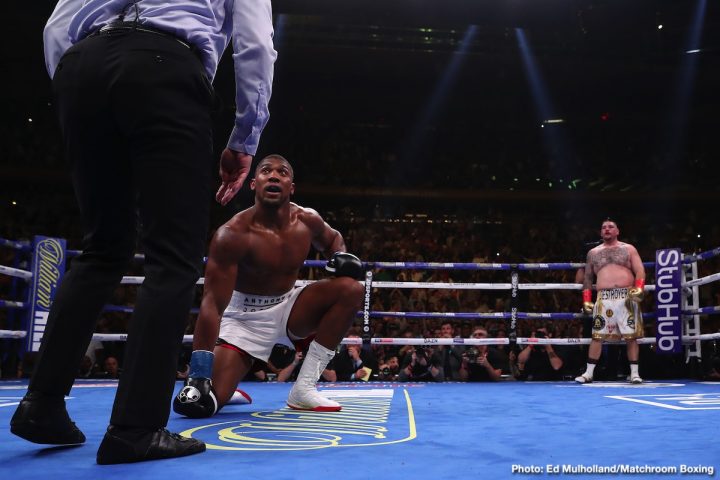 By Charles Brun: Matchroom promoter Eddie Hearn states that it’s a 50-50 chance that the Anthony Joshua vs. Andy Ruiz Jr. rematch will be staged in the United Kingdom, according to Michael Benson. Hearn hasn’t yet determined whether it should take place in America or the UK.

If it’s up to Hearn, he would have the fight in the UK to give Joshua an advantage. The options for the rematch are Wembley Stadium, Cardiff and Tottenham.

Hearn: We decide where and when Joshua-Ruiz rematch takes place

“If Anthony Joshua is who I think and who I know he is, he should beat Andy Ruiz,” said Hearn to Fino Boxing. “He wanted to fight [Luis] Ortiz. Maybe he would have had an easier night against Ortiz? Who knows? When you chase somebody and give them a lot of money, you have the security of a rematch. He’s going to make a lot of money as well. Now it’s about where it’s going to be. That’s the only thing to decide where it’s going to be and what date. I’m not ruling out America, but you should do it in the UK,” said hearn.

Joshua feels that the ideal way to avenge the loss would be to go back to New York where he lost to Ruiz Jr. by a seventh round TKO on June 1 at Madison Square Garden. This fight was supposed to be Joshua’s coming out party in the United States where he hoped he would become a star.

If Joshua gives into Hearn’s preference of having the Ruiz rematch take place in the UK, he will for all intents and purposes give up on the idea of becoming a star in the U.S. Losing to Ruiz in the United State, and then going back to the UK to try and avenge it wouldn’t help Joshua’s popularity in the States. Even if Joshua were to win the rematch, the fact that he had to go back to the UK to make it happen would limit the credit he gets by American fans.

Joshua wants to erase those demons

“He’s the type of person where he wouldn’t erase the demons unless he did it in the Garden, but you’ve got to go and revisit those demons,” said Hearn about Joshua. “For him to even suggest it, it tells me he’s strong mentally.”

If Joshua is as good a fighter as Hearn and the other Matchroom Boxing brass believe him to be, facing Ruiz in the U.S shouldn’t be a problem. Lennox Lewis spent a good portion of his pro career in the United States despite the fact that he was from the UK. Lewis didn’t feel he needed to run back to the UK after his loss to Hasim Rahman.

Hearn: Ruiz Jr. will be free do what he wants if he beats Joshua in rematch

Eddie says Ruiz will be free to move on and fight whoever he pleases after he faces Joshua in their contractual rematch. That sounds good, but also isn’t a great deal necessarily for Ruiz. His rematch with Joshua figures to make huge money, but the purse split is expected to be in Joshua’s favor. We don’t know what the split is. For example, if Ruiz gets a 75/25 percentage split in the rematch, Joshua is going to make huge money off the rematch.

If Joshua loses that fight, he’ll likely move on. Ruiz probably won’t make the same kind of money that he could have gotten against Joshua in fights against the other heavyweights like Deontay Wilder and Tyson Fury. It’s not such a great deal in theory for Ruiz when you think about it. Yeah, Ruiz can move on if he beats Joshua a second time, but the money he could have gotten if the split was 50-50 against Joshua for the rematch would likely have been considerable.

“He’ll be getting great money, but we’ll decide where it’ll be,” said Hearn about Ruiz Jr. “The two options are the UK and the U.S. Next week, we’ll get out teeth into the exact venues and possibilities.”

“When you sign a contract, those things are taken care of. He knows his situation for the rematch,” said Hearn. “He’ll [Ruiz] be paid well for the rematch. More importantly, this is his last obligation. If he wins the rematch, he’s free to do whatever he wants. He’s going to have the world at his feet. But he’s going to come across a very determined man in AJ. Andy’s confidence now is going to be through the roof,” said Hearn.

Unless Joshua decides he wants to risk everything and fight Ruiz a third straight time, Andy will likely need to defend his IBF title against his mandatory Kubrat Pulev by that point. Then he’ll have to deal with his WBA and WBO mandatory challengers. It’s really not worth it for Ruiz to hold onto all three titles, because he’ll get bogged down fighting guys that bring nothing to the table. Letting the IBF and WBO belts go would be a smart move for Ruiz. The WBA belt would arguably be the best to hold onto.

“He got caught with a shot on his ear, and it completely took his legs away, and he never recovered,” said Hearn about Joshua after he was hurt by a left hook from Ruiz in the third round. He got up four times. He would have kept getting up, but it was over at that point. It was just that he couldn’t recover from that one shot,” said Hearn about Joshua.

Hearn’s theory for why Joshua lost to Ruiz is because he was clipped by a big left hook that ht him to the side of the head in the third. Joshua never recovered from that blow, according to Hearn. It looked like Joshua got tired, and his lack of conditioning was the major reason for why he quit in the seventh round. Joshua’s legs looked like rubber from the pace of the fight.


« Murat Gassiev vs. Joey Dawejko on July 27 in Texas