Hearn in talks with 3 UK venues to stage Joshua vs. Ruiz rematch 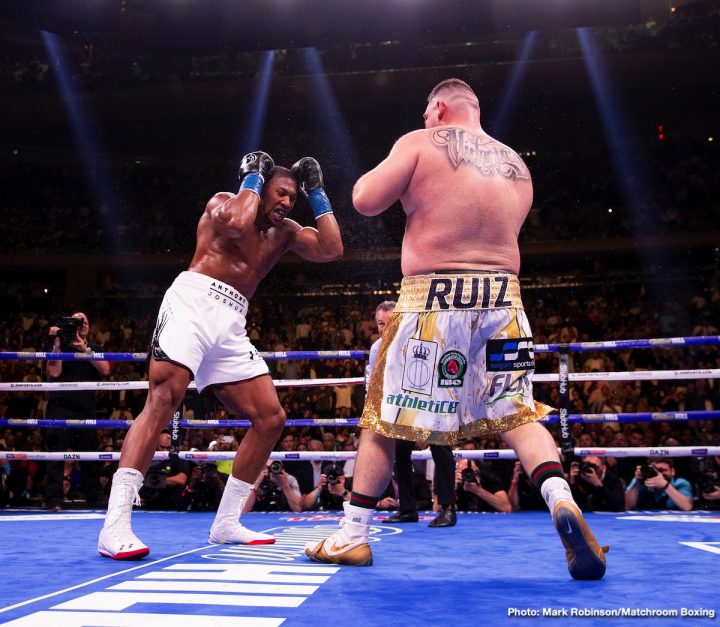 By Trevor McIntyre: Matchroom promoter Eddie Hearn is in discussions with three UK venues to stage the rematch between IBF/WBA/WBO heavyweight champion Andy Ruiz Jr. and Anthony Joshua for November or December.

Hearn says that Joshua (22-1, 21 KOs) prefers having the rematch at Wembley Stadium in London, UK. However, Hearn is concerned about the weather being a problem with the Joshua-Ruiz Jr. rematch taking place outside.

These are the venues that Hearn is looking at:

Hearn says Joshua, 29, thinks it would be a good idea for the rematch to take place at Madison Square Garden in New York. This is where Joshua lost to Ruiz Jr. by a seventh round knockout on June 1. However, Hearn wants the rematch to take place in the UK, because that gives Joshua a better chance of winning. At this juncture, Hearn wants Joshua to win all costs. It’s condition critical for Joshua. A second straight loss to the American Ruiz Jr. will hurt his popularity in the same way former middleweight champion Gennady Golovkin’s popularity appears to have taken a hit after his two fights with Canelo. GGG failed to beat Canelo in the two matches, and a lot of boxing fans are no longer on Gennady’s bandwagon.

“There are discussions for White Hart Lane, Wembley and Cardiff,” said Hearn to IFL TV about potential venues in the UK for the Joshua vs. Ruiz 2 rematch. “I think AJ likes the Wembley fight. He’s had a lot of good nights there, but November, the weather is not the best potentially. I don’t know if Andy Ruiz likes it in the rain,” said Hearn.

Does Joshua need to be at home to win?

It makes Joshua look weak in the eyes of boxing fans if the rematch needs to take place in the UK for him to have a chance of winning against Ruiz. If Joshua can’t beat Ruiz without home advantage in the UK, then what does that say about AJ? Is Joshua that reliant on the judges, referee and the crowd for him to beat Ruiz?

It makes Joshua not look like the fighter that Hearn had portrayed him to be all these years. The referee is an important person in Joshua’s fights, as we saw in his matches against Joseph Parker and Carlos Takam. Both of those fights took place in the UK, and the referees that worked the contests made questionable decisions. Ruiz says he wants the fight in Southern California or Mexico.

Ruiz Jr. said he wants $50 million if he’s going to let the B-side fighter Joshua have the rematch in the UK. In other words, Ruiz sees himself as the A-side now that he holds three world titles, and Joshua none. Hearn says he doesn’t want to talk contracts with the media.

“He said, ‘of course,’ he will beat him in the rematch,'” said Eddie Hearn to IFL TV in talking about what trainer Rob McCracken said about his belief that Joshua will defeat Ruiz Jr. in the rematch later this year in November or December. “Then it was a no-brainer for me [to make the Joshua vs. Ruiz Jr. rematch after McCracken said AJ will win].”

Joshua’s trainer Rob McCracken has take a great deal of fallout from boxing fans for the way things fell apart in the Ruiz fight. Hearn states that McCracken has done a great job with Joshua all these years. However, Joshua has shown vulnerabilities in the chin and stamina department long before his loss to Ruiz.

Back in 2015, Dillian Whyte had Joshua hurt and gassed out in the second round. Joshua was exhausted for three to four rounds after being clipped by Whyte in the second round. Joshua came back to stop Whyte in the seventh, but only because he suffered a shoulder injury in the fight. Joshua’s stamina problems in the Whyte fight was a huge red flag. We saw the same problem for Joshua with him running out of gas against Wladimir Klitschko in 2017.

If Joshua gets beaten by Ruiz a second time in the rematch, it’s hard to imagine McCracken being with him much longer. Joshua’s poor chin and stamina will need a trainer that can help him in this area. Wladimir and Lennox Lewis were both helped by Emanuel Steward, and they had chin issues. Joshua’s situation is more dire, because he’s got a chin and conditioning problems.

“All we have to do is give him [Ruiz] the date, and the location of the venue,” said Hearn in letting the boxing fans know that Joshua is in charge of when and where the rematch with Ruiz Jr. will take place despite the fact that he’s the challenger. “He said, ‘it almost feels wrong to do it in the UK. He beat me fair and square.’ What makes sense is to do it your home country [UK] to try and win the fight. To beat him where it went wrong would be incredible,” said Hearn.

Hearn has got to be more than a little worried right now about Joshua’s situation with his career. He can’t continue to lose to the likes of Ruiz and remain a viable superstar. Joshua might not retire, but the sport could retire him for all intents and purposes.

“I think no,” said Hearn when asked if Joshua will retire if he loses the rematch to Ruiz. “If he were to lose this fight, he would have lost to just one person in his career. Should he retire? I don’t think so. When you’re sitting there with nine digits in the bank, how much do you want it? I think from what I’ve seen from him this week is an individual that is so driven,” said Hearn about Joshua.

It makes sense for Joshua NOT to retire after a second loss to Ruiz, because he can still be rebuilt with soft match-making by Eddie. All Hearn will need to bring Joshua back as a money-making machine for Matchoom is to start putting him in with guys like Dominic Breazeale, Alexander Povetkin, Carlos Takam and Carlos Molina. Joshua can beat those type of fighters without ever losing.

Once Joshua starts winning again, the flood of green stuff will start up once again. Why would Hearn want to cut off such a huge revenue stream from AJ by suggesting he retire? All Hearn needs to do is start matching Joshua like he was doing before by putting him in with old guys like 38-year-old Carlos Takam, 40-year-old Alexander Povetkin, and 42-year-old Klitschko.

Hearn blames Joshua’s loss on him being concussed

There’s a large number of Joshua apologists that blame his defeat to Ruiz on him being clipped with a big left hook in the third round. There’s another group of boxing fans that see Joshua’s loss as being a combination of weak punch resistance and poor stamina. You can make a strong argument that the real reason for Joshua’s loss wasn’t just him getting clipped with a shot by Ruiz. But more of an accumulation of vulnerabilities that Joshua had.

Joshua’s poor stamina, which is a product of carrying too much muscle, and not doing enough cardio. Joshua had never fought a young quality fighter. Joshua Parker is easily the best young fighter Joshua has ever fought, but the referee kept him from getting close to AJ by breaking the action.

Joshia vs. Ruiz rematch to be announced in 2 weeks

“In the next two weeks,” said Hearn in giving a timeline for when the Joshua vs. Ruiz rematch will be announced. “Right now, we’re just taking in all the offers around the world to stage this fight. It shocks me. Everyone wants it.”

It’ll be good for Hearn, Joshua and Ruiz to have the rematch announced as soon as possible. They can begin promoting the fight, and make it the biggest heavyweight fight in the history of boxing. 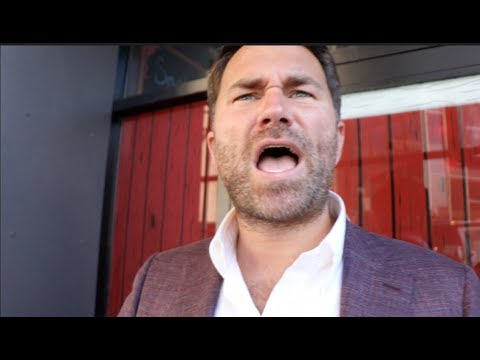