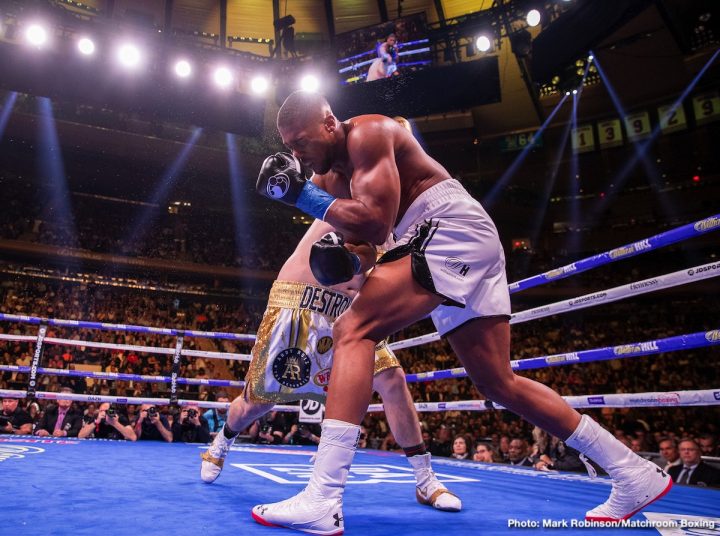 By Trevor McIntyre: Freddie Roach says Anthony Joshua is carrying too much muscle weight, and he’s going to lose the rematch with Andy Ruiz Jr. later this year when they face each other in the U.S or UK.

Roach states that Joshua (22-1, 21 KOs) has been going downhill slowly since his fight against Wladimir Klitschko in 2017. Joshua won that fight by an 11th round knockout, but was knocked down in the sixth.

Joshua has struggled with his stamina since then, and it cost him earlier this month when he gassed out after three rounds against Ruiz Jr. at Madison Square Garden in New York. Ruiz stopped Joshua in the seventh round to win his IBF, WBA and WBO heavyweight titles.

“I’m friendly with Joshua, but I think they picked the wrong guy,” said Freddie Roach to Fighthub about Joshua making the mistake of choosing Ruiz Jr. a his opponent. “He [Ruiz Jr.] got the call at the right time. He was in he gym. If he wasn’t ready, he would have had to say no to the fight.”

“Now we have a new Mexican champion of the world. The same thing,” said Roach when asked what will happen in the rematch between Joshua and Ruiz. “If Joshua doesn’t completely change his ways. Ever since he fought [Wladimir] Klitschko, he’s been going downhill a little bit,” said Roach.

As a pro, Joshua gasses quickly now that he’s in the mid-240s, and he fails to recover quickly to get his second wind. Joshua weighed 247 lbs for the Ruiz Jr. fight, and that was too much weight for him. AJ looked over-muscled.

Roach: Joshua is carrying too much muscle

“He has a lot more muscle. That looks really good. I think he has trouble carrying that muscle, and he’s been fatigued in his last couple of fights,” said Roach about Joshua. “He’s been getting tired before the end. I don’t think muscles make fighters. ‘He has big biceps, so he must punch hard.’ Give me a break. I’d like to say he needs a new trainer, and I’d like to be part of the team, because I do like him. I’m not trying to steal a fighter. I think he needs to go back to where he was in the Olympics, because that’s when he was a really good fighter,” said Roach.

Joshua isn’t showing signs that he’s going to replace trainer Rob McCracken after his loss to Ruiz. A massive amount of boxing fans are calling for Joshua to dump McCracken, but he won’t do it.

The general perception is Joshua wants to look the part of an elite heavyweight. Having lots of muscles is one way for Joshua to look the part of being a top heavyweight. It’s safe to say that Joshua will weigh between 245 to 254 pounds for the remainder of his pro career. He’s become the Primo Carnera of this era. Joshua isn’t quite as heavily muscled as Carnera, but he’s close. Joshua’s physique is similar to former boxer Mike ‘Hercules’ Weaver, but he doesn’t possess the excellent stamina that he had.

Joshua vs. Ruiz Jr. rematch will be the same result say Roach

Roach says for Joshua to have a chance of winning the rematch with Ruiz, he would need to train differently. He doesn’t think he will though.

“Joshua is not in shape,” said Manny Pacquiao to Fighthub. Joshua needs to train.”

That’s pretty bad when Pacquiao is pointing out that Joshua needs to train more, but the question is will he?