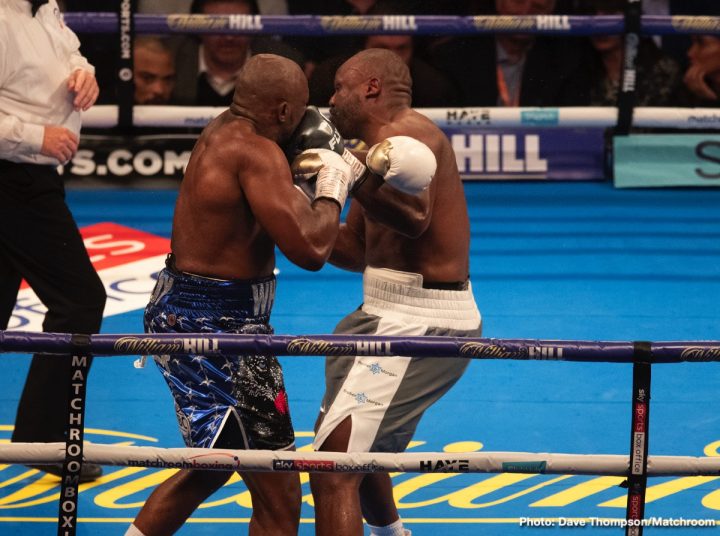 By Charles Brun: Dereck Chisora will be fighting former heavyweight world title challenger Artur Szpilka on July 20 on the undercard of Dillian Whyte vs. Oscar Rivas on Sky Box Office PPV at the O2 Arena in London, England.

Chisora-Szpilka is a decent fight for the undercard. Some fans still believe this fight card should be on regular Sky, because Whyte isn’t a world champion and Rivas is a fringe contender at #10 with the WBC. Asking fans to pay to see Whyte, who may never win world title at heavyweight, fight a short guy like Rivas is asking a lot of them.

The Chisora-Szpilka fight is the battle of the former heavyweight world title challengers. Both guys were given title shots, and both took horrible beatings in one-sided fights.

It’s not a great fight, but you can’t expect much at this point from either of them. Chisora (30-9, 21 KOs) has been struggling, and his promoter Eddie Hearn of Matchoom Boxing would spoil his usefulness to him if he put him in with a good opponent, because he might lose. Matching Chisora against Szpilka, 30, gives him a good chance of winning by an impressive knockout. An devastating knockout win for Chisora will help keep him high on the list as a viable opponent for some of Hearn’s other Matchroom stable fighters. In other words, the Chisora-Szpilka match is a showcase fight for Chisora. He’ll look good in winning.

Szpilka (22-3, 15 KOs) has lost two out of his last four fights by knockout. He was knocked out by Deontay Wilder and Adam Kownacki in consecutive fights. Kownacki stopped Szpilka in the fourth round in 2017. Szpilka has won his last two fights against old timers Mariusz Wach (age 39) and Dominick Guinn (age 44). Szpilka has a winning streak, but against lesser opposition.

Chisora will likely knock him out easily. Hopefully, it’s a clean knockout, and not a punch to the back of the head like we saw in Chisora’s knockout wins over Carlos Takam and Malik Scott. If Hearn can keep Chisora winning, he can use him as an opponent for Whyte, Anthony Joshua, Michael Hunter, Murat Gassiev, Oleksandr Usyk, Joseph Parker, Filip Hrgovic or Zhilei Zhang. Of that bunch, Parker and Usyk are the ones that are being talked about for Chisora to fight potentially.

Chisora in a good position with Matchroom

Hearn has put together a huge stable of heavyweights. He can mix and match many of them together. His prize heavyweight Anthony Joshua was just been dealt a crushing defeat at the hands of Andy Ruiz Jr. on June 1. Joshua and Hearn are risking everything in taking the rematch with Ruiz rather than doing the smart thing and walking away. If Joshua loses the rematch, Hearn might need to put AJ in against Chisora to boost his conference. Chisora may no longer be world title material at age 35, but he can still get nice paydays as an opponent for the good heavyweights.

In the biggest fight of his career thus far, Szpilka was knocked cold by WBC heavyweight champion Deontay Wilder in a ninth round KO in January 2016 in Brooklyn, New York. Szpilka had to be taken out of the ring on a stretcher.

For his part, Chisora lost a lopsided 12 round unanimous decision to former WBC champion Vitali Klitschko in February 2012. It’s interesting to note that Klitschko chose to defend his WBC title against Chisora despite the fact that Dereck had lost two out of his previous three fights going into that match. Vitali was criticized a lot at the time for facing a floundering heavyweight.

Chisora trying to come back from being knocked out by Whyte

Ranked #11 with the World Boxing Council, Chisora, who is more of a high level journeyman at this stage in his career, is fighting for the second time since losing to Whyte by a 11th round knockout last year. Whyte (25-1, 18 KOs) stopped Chisora last December at the O2 Arena. It was a competitive fight until Whyte caught Chisora with a big left hook and knocked him out in round 11. Moments before that, the referee had taken a point away from Chisora for throwing an elbow.

Earlier in the contest, the referee had deducted a point from Chisora for a low blow in the eighth. It looked to some boxing fans like the referee was singling out Chisora to call fouls, but not taking points away from Whyte. With the amount of fouling that was going on between both fighters, the referee would have been better off just letting them foul away rather than singling out Chisora. Whyte was the A-side fighter in the promotion.

“July 20 is not going to be an easy night in the office, I know that,” said Chisora to skysports.com. “Szpilka is an unpredictable come-forward southpaw, I will need to be in the best physical condition of my career to win this war, but I’m ready…Szpilka won’t be hearing the final bell.”

It’s pretty obvious that Chisora has an excellent chance of knocking out Szpilka. The Polish fighter’s punch resistance has proven to be on the low side in his fights against Wilder, Mike Molla, Bryant Jennings and Kownacki. Szpilka does have wins over Tomasz Adamek, Jameel McCline, Yasmany Consuegra, Brian Minto, Molla, Manuel Quezada, Guinn, Owen Beck and Taras Bidenko. However, those fighters aren’t among the elite in the heavyweight division in this time. Adamek was a good basic heavyweight years ago, but he’s old now.

Chisora pulled off a big upset last year in stopping Carlos Takam in the eighth round in July 2018. Takam was winning the fight through the first seven rounds, but things went to pieces by him in the eighth round. Chisora nailed Takam with a beautiful rabbit punch to the back of his head to put him down. Badly hurt, Takam got back to his feet, was dropped again by another looping shot from Chisora. After the fight, Chisora’s face was all beat up looking. He didn’t look like the winner of the contest, and it was a good thing for him that he scored the knockout. With the heavy shots that Takam was hitting Chisora with, it was only a matter of time before he knocked him out. The win for Chisora saved his career, and led to him getting the nice payday fight against Whyte in their rematch.

There’s a lot to lose for Chisora in this fight

A defeat for Chisora against a non-top tier heavyweight like Szpilka would spoil his usefulness as a B-side opponent for Parker or Usyk. Nevertheless, Hearn would likely still use Chisora as the opponent for either of those heavyweights, but the interest from the hardcore boxing fans would be far less. The casual fans probably wouldn’t be aware of Chisora having lost to Szpilka, so they won’t mind seeing him fight Usyk or Parker no matter what happens in his fight on July 20.

Ideally, Chisora needs to win this fight against Szpilka to be of use as opponent. He can’t getting beaten each time he’s matched against a decent heavyweight. Whyte beat Chisora twice, and he also lost to Agit Kabayel and Kubrat Pulev in the last three years. Losing as often as Chisora has isn’t a good thing, because at some point the casual fans will lose interest in seeing him fight. It still won’t be the end of the road for Chisora, but his career as a headliner opponent will surely be over.