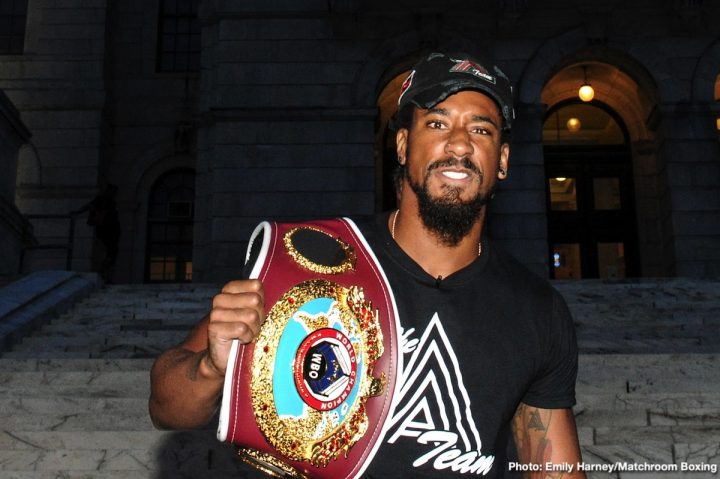 By Barry Holbrook: Demetrius Andrade blasted Gennady Golovkin during his conference call on Tuesday ahead of his title defense this Saturday night on DAZN against Maciej Sulecki. Andrade (27-0, 17 KOs) criticized GGG for his choice of opponent earlier this month in facing fringe contender Steve Rolls at Madison Square Garden in New York.

Unbeaten WBO middleweight champion Andrade pointed out Rolls was ranked #81 in the world at middleweight, and that’s not the type of opposition that he would be seen fighting. Demetrius thinks it reflects badly on Golovkin (39-1, 35 KOs) to be reaching for the low hanging fruit instead of going after the higher ranked contenders at the top of the tree.

Andrade will be making his first defense of his WBO 160-pound belt against #1 WBO Sulecki (28-1, 11 KOs) this Saturday night live on DAZN and Sky Sports at the Dunkin Donuts Center, in Providence, Rhode Island. Saul Canelo Alvarez asked Golovkin to go after a world title against Andrade, but he chose not to take that fight. Andrade wouldn’t have turned down a fight against GGG if it were offered to him.

“I can’t belittle myself and fight someone #81 [in the world], because I would definitely get criticized,” said Andrade in taking a shot at Golovkin for fighting bottom dweller fringe contender Steve Rolls. “I don’t ever want to take that route. So I want to make sure I keep eliminating these guys. So when they [Canelo and GGG] get inside the ring with Rocky Fielding and Steve Rolls, they look bad,” said Andrade.

Andrade is really letting Golovkin have it for his recent decision to fight 35-year-old Steve Rolls on June 8. GGG kind of surprised a lot of boxing fans by selecting someone ranked so far down like Rolls. The fans would have been happy if Golovkin had fought Sergiy Derevyanchenko, Rob Brant, Callum Smith, David Benavidez, Caleb Plant or Billy Joe Saunders. With GGG’s popularity, he would have had an excellent chance of fighting one of those guys, because they would have readily agreed to face him.

Andrade is trying to get Canelo & GGG fights

“So unlike GGG who just boxed Steve Rolls who was ranked about 81 in the world, I’m fighting real guys,” said Andrade about his fight against Sulecki. “We are fighting tough guys to get it on with Canelo and GGG whereas they have been cherry picking and they can do that with the profile they have, it’s just business. I’m not upset about it because my time will come when I walk in with one belt and walk out with four,” said Andrade.

Golovkin is ranked #1 with the World Boxing Organization. He’s the one that should be challenging Andrade for his WBO middleweight title instead of Sulecki. Had Golovkin listened to what Canelo and his promoters at Golden Boy had told him in recommending that he take the fight with Andrade, then he would at least have had the chance of winning the belt, and then fighting Alvarez in a unification.

It was a badly missed opportunity on Golovkin’s part in choosing to fight Rolls instead of Andrade. Of course, GGG likely thought he didn’t have to earn the Canelo fight by beating someone good to get the trilogy fight in September. It’s only now that Gennady finally realizes that Canelo was serious when he told him that he needed to make it worthwhile for him to fight him again by winning a world title first.

Sulecki is a stepping stone to one of the superstars in Canelo and GGG. The question is which one? Canelo is the only one of the two that is mentioning wanting to fight Andrade. Golovkin should be the one that is talking up a fight with Andrade, because he’s ranked #1 with the World Boxing Organisation, and Canelo and Golden Boy Promotions have already let him know that he needs a world title belt to get the trilogy fight.

It’s unknown if Golovkin will look to fight the winner of the Andrade vs. Sulecki fight, but it might not matter. Canelo appears to have his sights set on winning the WBO belt, so he’s probably going to be the one that goes after it. Given the choice, Andrade will perhaps select Canelo rather than Golovkin, because he’s the bigger name.

“I believe I’m the best in the middleweight division in terms of talent,” said Andrade. “I’m looking forward to being the first guy to stop Sulecki. Why wasn’t Sulecki in the ring with GGG instead of Steve Rolls?” said Andrade.

It’s a good question Andrade brings up in asking why Sulecki wasn’t chosen by GGG to fight on June 8 instead of Rolls. The answer is obvious. In all likelihood, Golovkin took the fight with Rolls, because it was the easier option than taking on a tough opponent like Sulecki, who might beat him. Moreover, GGG and his promoter Tom Loeffler might have thought they didn’t have to face a good fighter in order to get the trilogy fight with Canelo. They would get the fight just based on DAZN wanting the Canelo-GGG trilogy match for September.

If Golovkin didn’t feel like he needed to fight a good opponent in order to get the third contest with Canelo, then that would explain why they chose the little known Rolls rather than Andrade or Sulecki. Why take chances when you don’t fight anyone good to get the third Canelo match?

Andrade needs to focus on Sulecki

Sulecki could take advantage of Andrade being distracted in looking past him towards lucrative fights against Canelo and Golovkin. Andrade isn’t good enough to look past a talented guy like Sulecki. This is a fight that he could lose if he’s not 100 percent focused.