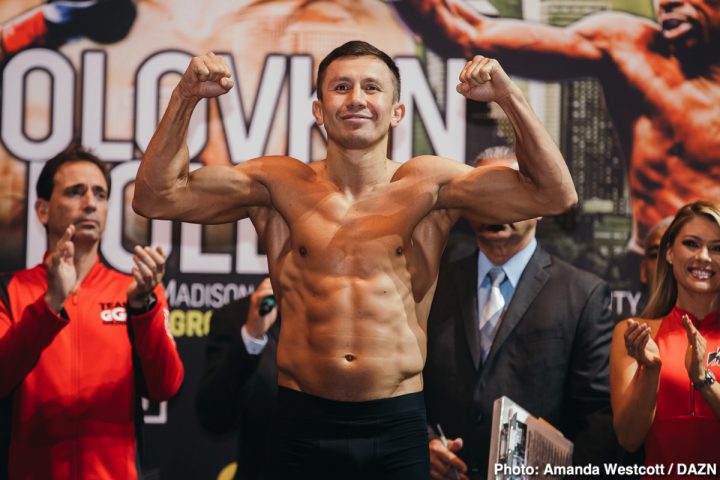 By Aragon Garcia: It looks like Gennady Golovkin won’t be getting the trilogy fight with superstar Saul Canelo Alvarez this September like he wants. Golden Boy Promotions head boss Oscar De La Hoya says GGG is going to have wait for the Canelo fight. When it does happen, Canelo will knockout GGG, says De La Hoya.

There it is. De La Hoya letting Golovkin know that he’s the “B fighter now,” and that he’s going to have to wait until the A-side guy, Canelo, calls for him to throw him a bone.

GGG only has himself to blame

De La Hoya and Canelo made it crystal clear what GGG needed to do if he wanted to get the trilogy fight in September. They told Golovkin that he needs to win a world title so that he would have something to bring to the table. In other words, Canelo wanted Golovkin to capture a world at 160 or 168, so that they could fight in a unification. Canelo holds world titles at middleweight and super middleweight. He can’t be bothered with fighters that are no longer willing to take on the best.

GGG is fighting the 35-year-old Rolls (19-0, 10 KOs) tonight on DAZN at Madison Square Garden in New York. There’s nothing wrong with Rolls as opponent if the 37-year-old Golovkin wasn’t so far advanced into his career, but he should be fighting better opposition than this. De La Hoya and Canelo told Golovkin what he needs to do to get the trilogy fight. For some reason, GGG has decided to ignore those instructions.

It won’t be surprising if Canelo makes Golovkin wait for the trilogy fight a year or two. It’ll be up to GGG. If he wants the third fight with Canelo, he needs to start fighting quality opposition again. Rolls isn’t quality. He’s a bottom fringe level opponent.

“I think Canelo will knock him out,” said De La Hoya when asked what will happen in the third Canelo vs. GGG fight.

It’s in Canelo’s best interest to wait until Golovkin redeems himself before he makes the third fight between them. Canelo defeated Golovkin by a 12 round majority decision in their rematch last September. It was a great performance by Canelo with him backing Golovkin up, hitting him with body shots, and dominating the fight. It was such a one-sided fight in the first six rounds that many boxing fans felt that Alvarez was on his way to a knockout. For the Canelo vs. Golovkin 3 fight to be a lot bigger, GGG needs to defeat the likes of WBO champion Demetrius Andrade, Jermall Charlo, Callum Smith or David Benavidez.

GGG looks weak in facing Rolls instead of a good fighter

Golovkin needs more than one big win for him to bring himself back from his two fights against Canelo. Right now, Golovkin looks bad in facing Rolls. Golovkin doesn’t realize how weak this fight makes him look in the eyes of a lot of boxing fans. GGG lost credibility with a lot of fans with his 12 round majority decision defeat to Canelo last September. Going from that loss to fighting an unknown fighter with an inflated record/resume in Rolls makes GGG look like he’s in need of a soft touch to pad his record.

It’s the worst possible move that Golovkin could have taken after his loss to Canelo. GGG should of followed Daniel Jacobs’ lead by fighting the likes of Sergiy Derevyanchenko or Maciej Sulecki following his defeat against him. Jacobs took the right approach in redeeming himself in the eye of the boxing public by facing quality opposition. Golovkin is doing the opposite in facing Rolls, who is an old guy at 35, and has never fought a quality opponent before during 10-year pro career.

GGG’s new trainer Johnathon Banks says Golovkin will need to knockout Canelo Alvarez (52-1-2, 35 KOs) when the time comes for the two to face each other in a third fight. Banks says he wants Golovkin, 37, to knockout Canelo in a “beautiful” fashion to make a statement. He says the reason why GGG didn’t stop Canelo in their two previous fights was he didn’t land his shots cleanly.

Canelo had his defense on point, and he was able to use head movement to move with the shots. Golovkin ended up missing with many of his power punches because of the upper body movement from Canelo. In order to make contact, Golovkin had to lessen the strength on his shots. So when he did land cleanly, he didn’t have the heat on his shots to hurt Canelo. This is normal for Alvarez to do that to his opponents. He makes them miss with his head movement, and they’re forced to throw with less power to increase their chances of landing.

Banks is asking the impossible of GGG by saying he needs to knockout Canelo. That’s not going to happen. To knockout Canelo, Golovkin would have to stay right on top of him, throw lots of punches, and not let him rest for a second. GGG won’t do that, because he’ll get countered to pieces, and would be embarrassed. The crowd would start cheering for Canelo once he starts countering GGG, and that in turn would embarrass Triple G. Golovkin backs off when he’s hit cleanly by Canelo, because he’s not comfortable taking his power. A good fighter would stay in the pocket, ignore the crowd, and continue to fire shots until Canelo faded. Golovkin listens to the crowd too much for him to ever knockout Canelo.

“I don’t think he [Golovkin] caught him clean with those shots,” said Banks about the hard punches that GGG landed to the head of Canelo in their two fights in 2017 and 2018. “If you noticed the position Canelo was in, no shot landed solid. There wasn’t any clear shots. The biggest shots he [Golovkin] threw weren’t clean shots. Canelo was able to out-box him. That’s why I say the tables will shift around. The goal is for him to out-box Canelo,” said Banks.

What Banks isn’t saying is that Golovkin lacks the hand speed to hit Canelo. GGG also telegraphs his shots, which makes them easy for Canelo to block or dodge. Golovkin doesn’t throw nonstop punches the way he would need to for him to have a good chance of defeating Canelo by knockout.

“We’re prepared for the fight. I believe you’ll see a slightly different GGG,” said Banks about Golovkin’s fight tonight against Rolls. “The goal is to see rhythm, a little bit of movement, better defense, and a lot more higher output of offense. That’s the goal of what I’d like everyone to notice. He has a lot of untapped talent that I’m looking at. I’m like, ‘wow, this dude is awesome,'” said Banks about Golovkin.