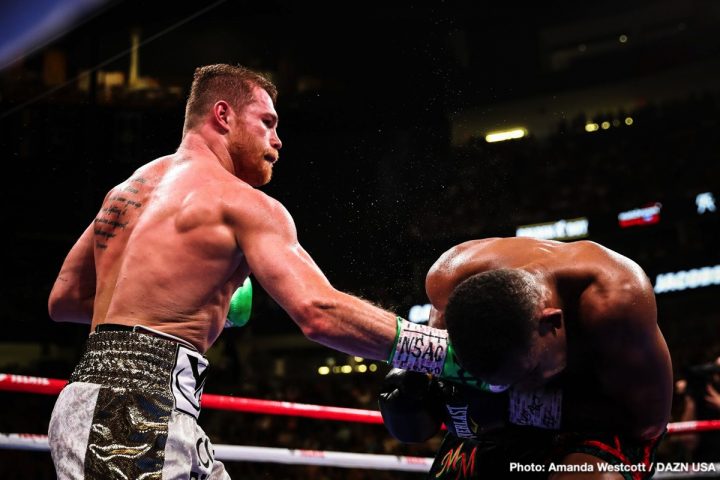 By Mark Eisner: Gennady Golovkin and DAZN are said to be highly motivated in making a trilogy with Saul Canelo Alvarez for September, but the feelings aren’t mutual, according to Mike Coppinger. Canelo and his promoters at Golden Boy Promotions are more intrigued with the idea of facing either Demetrius Andrade or Sergey Kovalev for September 14.

Alvarez wants to face the best in legacy building fights

The Mexican star Canelo wants to build his legacy by facing guys that are still striving to acheive with their careers. A lot of fans think GGG has stopped trying, and is only looking to cash out by fighting Canelo as often as possible in his last five fights. Canelo doesn’t want to be forced to battle GGG for a third time right now. You can argue that Canelo will eventually fight GGG sooner or later, as long as he turns his career around. But for Canelo to give Golovkin a fight right now, it would look like he gave in to the pressure from DAZN and GGG. Canelo wants to fight Golovkin after he rebuilds his career by knocking off some talented fighters first. If GGG can’t do that, then it wasn’t meant to be.

Unfortunately, Golovkin isn’t showing interest in fighting good opponents. He just fought Steve Rolls on June 8, and he made it clear at the post-fight news conference he doesn’t want to face some of the top guys. Golovkin was asked if he wanted to fight Daniel Jacobs, Jermall Charlo or Demetrius Andrade, but he said he wanted to fight other guys. He didn’t mention the names of those fighters, but it’s believed to be Kamil Szeremeta, Jason Quigley or Esquivia Falcao.

There’s still a possibility that DAZN and Golovkin could get their way with the Canelo Alvarez fight taking place in September, but it’s not looking good. Canelo wants to do other things with his career, and not get stuck fighting a guy that has failed to earn the trilogy fight.

Normally when a fighter fails to win in two fights, they need to rebuild in earn their way to a third fight. GGG isn’t doing that. He feels he deserves the fight just based on the first two fights with Canelo being close affairs. But Canelo doesn’t feel that’s a good enough reason for a third fight to take place.

Canelo gains more in fighting Kovalev or Callum than GGG

There’s not a lot for Canelo Alvarez (52-1-2, 35 KOs) to gain in fighting Golovkin (39-1-1, 35 KOs) right now. Canelo can get more praise in beating Callum Smith at 168, and Sergey Kovalev at 175. Smith is viewed as the #1 fighter in the super middleweight division by many. Kovalev is old at 35, but he’s still one of the top fighters at light heavyweight. There are arguably better fighters at 175 than Kovalev, like Dmitry Bivol, Artur Beterbiev, Marcus Browne and Oleksandr Gvozdyk. However, those fighters aren’t a well known to the casual boxing fan as Kovalev, and those are guy that Canelo would likely lose to. Canelo wouldn’t be going up to light heavyweight to get beat. That’s not the idea. He would be moving up to 175, because he views Kovalev as someone that is vulnerable.

“Sources tell @TheAthleticBOX that Golden Boy Promotions and Canelo Alvarez are rebuffing attempts to make a trilogy fight with GGG in September. Instead, they want Canelo to fight either Callum Smith or Sergey Kovalev on Sept. 14, with GGG to follow in May 2020,” said Mike Coppinger on his Twitter.

Alvarez would be taking big risks against Kovalev and Smith

Canelo would be taking some insane risks against Smith and Kovalev. Those guys are big, rangy, and powerful fighters. The 5’8′ Canelo would need to ue a lot of head movement against those guys. The good news for Canelo is neither of them have ever fought anyone with his kind of head movement before. Kovalev has fought Andre Ward, Jean Pascal, Bernard Hopkins, Nathan Cleverly and Eleider Alvarez, but those fighters didn’t use head movement to any great extent.

Errol Spence Jr. was an option for Canelo until recently

Golden Boy Promotions was interested in matching Canelo against Errol Spence Jr., but he opted to take a unification fight against WBC welterweight champion Shawn Porter. There’s still interest in a Canelo vs. Spence fight in the future, according to Coppinger. But obviously that’s not a fight that will be able to take place in September. It’s possible Canelo and Spence could face each other next year.

“DAZN still fighting to make Canelo-GGG 3 happen this fall,” said Coppinger. “GBP [Golden Boy Promotions] is also was interested in Errol Spence Jr. for Alvarez before he signed to fight Shawn Porter. They could revisit potential Canelo-Spence fight down the road.”

Of course, it would be better for DAZN if they put off the Canelo-GGG trilogy fight until Golovkin beats some noteworthy fighters like WBO middleweight champion Demetrius Andrade, Jacobs, Callum Smith or Billy Joe Saunders. However, it would be risky for Golovkn and DAZN for him to take those fights, because he could lose. If Golovkin suffers another loss, his trilogy fight with Canelo won’t bring in a lot of subscribers. The 37-year-old GGG’s advanced age, and the fact he’s slowing down rules out waiting much longer.

“Canelo would fight Smith at 168 and Kovalev at 175,” said Coppinger. “There’s still a good chance Canelo-GGG 3 happens Sept. 14 as planned, nothing has been decided yet. GGG wants the fight; DAZN wants it, too. We’ll see what materializes on the Canelo end.”

DAZN has the power to force Canelo vs. Golovkin trilogy match

If DAZN wants the trilogy fight between Canelo and Golovkin to happen in September, then they can probably force it. Canelo has the option to choose his opponents that he faces in his 11-fight, $365 million contract with DAZN, but he probably won’t turn down the GGG trilogy fight. If DAZN wants the Canelo vs. GGG trilogy match to take place in September, then it’s likely it’ll happen. The decision will be made easier for Canelo if Andrade looks good this Saturday against Maciej Sulecki. The last thing Canelo needs is to be fighting someone that is looking unbeatable right now. Callum looked hard to beat in his recent win over Hassan N’Dam. If Canelo chooses Smith, he could be making a mistake. GGG might be the easiest fight for Canelo of those three.