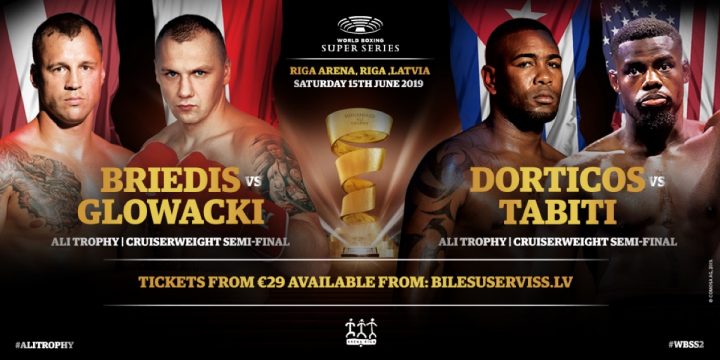 By Jeff Aranow: Mairis Briedis will be facing Krzysztof Glowacki, and Yunier Dorticos will be battling unbeaten Andrew Tabiti in the semifinals of the World Boxing Super Series cruiserweight tournament tonight at the Arena Riga, in Riga, Latvia. The fight card will be shown on DAZN.

The winner of these two fights will meet up in the final of the WBSS tournament later on this year. World Boxing Council president Mauricio Sulaiman reportedly has chosen not to have the vacant WBC belt on the line for the Briedis-Glowacki fight.

Former WBA cruiserweight champion Yunier ‘The KO Doctor’ Dorticos (23-1, 21 KOs) will be facing the unbeaten Andrew Tabiti (17-0, 13 KO) in a 12 round fight for the interim International Boxing Federation World Cruiserweight Title. Tabiti, 29, has fought as a pro since 2013, and he has victories over former world champion Steve Cunningham, Lateef Kayode and Ruslan Fayfer. Tabiti edged Fayfer by a close 12 round unanimous decision in the quarterfinal of the WBSS.

“He [Tabiti] will fight the best he ever fought,” said Dorticos in talking about his fight against Tabiti tonight. “‘The KO Doctor’ is going to win, I will take care of business and take him out. I am the number one cruiserweight.”

The Cuba born Dorticos is a huge puncher, and he throws a lot of shots. His work rate alone makes him a dangerous fighter to deal with, but his power is what sets him apart from his opponents. Dorticos hits very hard. Last year, Murat Gassiev stopped Dorticos in the 12th round to unseat as the WBA champion after dropping him. Dorticos ran out of gas in the 12th, and ended up getting caught with one of Gassiev’s big punches.

Had Dorticos been able to stay on the outside, he would have had a chance to win. Dorticos’ stamina is a major question mark in tonight’s fight with Tabiti. He does not have a great engine, which isn’t all that surprising. Dorticos hasn’t had the chance to develop his conditioning due to the high number of knockouts he’s recorded.

In the quarterfinal of the WBSS Dorticos edged Mateusz Masternak by a close 12 round unanimous decision last October in Orlando, Florida. The judges scored it 116-112, 115-113 and 115-113. Boxing News 24 scored it for Masternak by a 115-113 score. Dorticos fell apart in the second half of the fight from the pressure that Masternak was putting on him, and he looked like he didn’t deserve the victory. Masternak fought well, but it wasn’t his night.

Tabiti’s youth will be too much for the 33-year-old Dorticos, and he’ll win by a 12 round decision. Dorticos will be dangerous early on, but he’ll run out of gas in the championship rounds. Dorticos will win the fight if his stamina holds up, but that’s not likely to happen. Tabiti isn’t a great fighter by any means, but his stamina is far superior to that of Dorticos. That’ll be the key to Tabiti winning the fight tonight. He has the better engine than Dorticos.

Former WBC cruiserweight champion Mairis Briedis (25-1, 18 KOs) faces WBO champion Krzysztof Glowacki (3-1, 19 KOs). As this writer already mentioned, the WBC president Sulaiman has changed his mind about letting the vacant WBC cruiserweight be on the line for tonight’s Briedis vs. Glowacki fight for some reason. [WBSS organizers] “failed to maintain the integrity of the bout, and disregarded the WBC rules and regulations,” Sulaiman said via Michael Benson. Sulaiman doesn’t say what the WBSS did that caused him to choose not to put the WBC title on the line.

It’s not that big of a deal that the WBC belt won’t be available tonight for the Briedis-Glowacki fight. As long as the World Boxing Organization belt is at stake, it helps validate the fight.

Briedis & Glowacki both have losses to Usyk

Oleksandr Usyk defeated Briedis and Glowacki in the past. However, Briedis gave Usyk a lot more problems than the southpaw Glowacki did. One reason for that is Briedis’ awkwardness, and the nonstop pressure that he put on him. Usyk is a good fighter, but he doesn’t like being pressured nonstop, which is what Briedis did against him last year in January 2018. Usyk won the fight by a narrow 12 round majority decision by the scores 115-113, 115-113 and 114-114.

For his part, Glowacki lost to Usyk by a 12 round unanimous decision in September 2016. The scores were 117-111, 119-109 and 117-111. Glowacki was throwing one punch at a time against Usyk and that’s not how you beat him. Usyk struggles when his opponents throw combinations. Usyk had problems in his fights with Michael Hunter and Briedis. Glowacki fought Usyk the same way Gassiev did in throwing one punch at a time.

“I am one hundred percent ready,” said Briedis. “Everyone in this tournament is in great shape and tomorrow we will see great boxing. I am thankful for everyone who showed up today.”

“I feel perfect,“ said Glowacki. “I hope the fight will be exciting, that’s what the fans expect. It is no issue to fight here and I know there will be a lot of Polish fans.”

Briedis hasn’t looked good since his loss to Usyk for some reason. In Briedis’ two fights since then, he’s fought poorly in beating Brandon Deslaurier and Noel Gevor. Briedis arguably lost to Gevor in the quarterfinal of the World Boxing Super Series last November in Chicago.

Glowacki will have too much fire power for Briedis tonight, and he’ll take it to him. Briedis’ accuracy has looked bad lately, and he tends to fall forward into a clinch with each punch he throws. Briedis used to be good at landing his shots, and throwing combinations. He’s not the same fighter since his loss to Usyk. Something happened to Briedis’ game after that fight. It could be age or simply him facing guys that have a lot of talent.