Arum says Joshua could be finished after loss to Ruiz 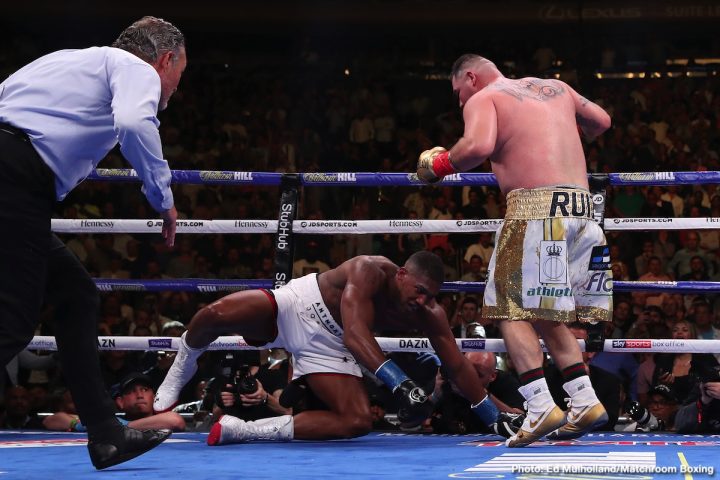 By Charles Brun: Anthony Joshua might not ever be able to come back from his loss to Andy Ruiz Jr., according to Top Rank promoter Bob Arum. He says he’s seen this kind of thing before. Former two division world champion ‘Lone Star Cobra’ Curry was never able to come back after suffering an upset sixth round stoppage loss to British fighter Lloyd Honeyghan in September 1986. Arum thinks that could happen with Joshua.

Could Joshua’s career be over at age 29?

If Joshua loses the rematch with Ruiz, which is highly possible, is it curtains for the former IBF/WBA/WBO heavyweight champion? Joshua has the popularity to urge Ruiz Jr. to make a third consecutive fight with him. It would obviously be foolish on AJ’s part, but so is his decision to make an immediate rematch. Joshua could risk his entire career by fighting Ruiz again, and see how things go.

“When something like this happens, there may never be that Joshua again,” Arum said to the Telegraph. “We had this great welterweight. People were saying he was going to be better than Sugar Ray Leonard. He was a champion named Don Curry. We put him in with Lloyd Honeyghan. And Honeyghan was like a 40-1 underdog. Curry didn’t show up and got beat. He was never the same fighter. This is what could happen to Joshua,” said Arum.

Curry’s career spiraled down due to tough match-making, not because of loss to Honeyman

Arum is forgetting to tell the reader precisely why Curry was never able to come back from the loss to Honeyman. It wasn’t because Curry was a shot fighter. It was was due to the tough fighters that he was put in with after his loss to Honeyman. After the defeat, Curry was matched against these talented fighters:

Those are talented fighters. It’s not surprising that Curry wasn’t able to come back from the loss to Honeyman, because those are guys that he would have likely lost to anyway, even if he’d never been beaten by the British fighter. Norris, Nunn and McCallum were great talents. Curry was a hard puncher, but he was never in the class of the likes of those fighters.

Is Joshua making mistake in making an immediate rematch with Ruiz?

Joshua and his promoter Eddie Hearn of Matchroom Boxing have already made up their minds that they’re going to take the rematch with Ruiz Jr. in November or December. Joshua and Hearn have been banging on about “righting the wrongs” of the loss to Ruiz, but it appears that AJ was meant to lose. Ruiz had his number. There are certain types of fighters that guys lose to, and Ruiz was the wrong type of guy. Joe Frazier couldn’t beat George Foreman, because it was the wrong style for him. Those two could have fought 100 times, and Frazier likely would have lost. Ruiz might be the same guy for Joshua.

Ruiz Jr. isn’t a puncher, according to Arum, which is why he was surprised with how he was able to knockout Joshua. A lot of boxing fans would disagree with Arum. Ruiz clearly has heavy hands. Perhaps Arum doesn’t remember Ruiz too well? Ruiz punches well, and he throws a lot of speedy combinations that enhance his power. Joshua wasn’t ready for the speed or the combinations that Ruiz was throwing.

“Andy is a pretty good fighter. He has fast hands and quick feet,” said Arum. But he has absolutely no punch. He was in with a lot of guys who couldn’t spell fight, and he beat them, but he couldn’t knock them out. Andy Ruiz is a lovely guy, but he’s no Wladimir Klitschko. If Joshua was able to survive Klitschko, who can punch, and knock him out, how the hell does Ruiz beat him?”

Ruiz Jr. is better than Wladimir in a lot of ways. Ruiz’s stamina is better, throws better combinations, and he has the killer instinct that the former heavyweight champion lacked. Wladimir had Joshua ready to be finished in the sixth, but he backed off and let him survive. Wladimir’s poor decision making came back to haunt him when Joshua regrouped and stopped him in the 11th. Ruiz might not be powerful as Wladimir, but he’s a more complete fighter than the Ukrainian was.

Andy’s punch resistance is clearly better than Wladimir’s, which is why he was able to get up off the deck in the third round against Joshua and stop him at Madison Square Garden. The shot that Joshua knocked Ruiz down with might have knocked out Wladimir if he had landed it on him. Ruiz won the fight against Joshua, because he could take a punch better. Joshua couldn’t handle the shots Ruiz was hitting him with, and that’s why he ended up losing.

Tyson Fury: ‘Joshua should retire if he loses rematch with Ruiz Jr’ »