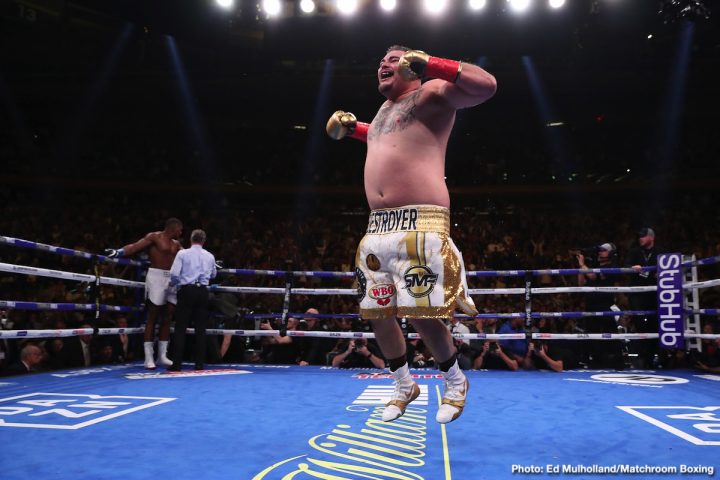 By Tim Royner: Late replacement opponent Andy Ruiz Jr. made a mess of IBF/WBA/WBO heavyweight champion Anthony Joshua’s U.S debut last Saturday night in scoring a seventh round technical knockout in front of 7,000 of his British boxing fans at Madison Square Garden in New York. Ruiz Jr. came into the fight as a 25 to 1 underdog against the heavily muscled 6’6″ Joshua.

After Joshua was knocked down twice by Ruiz Jr. in the seventh round, Joshua leaned against the ropes with an odd-looking smile plastered across his face. The referee Michael Griffin asked Joshua if he wanted to continue, and he smiled back at him and looked like he was mentally not there. Griffin recognized that Joshua had given up, so he waived the fight off at 1:26 of round seven.

Joshua looked back at Griffin in disbelief as he called a halt to the fight, but he chose not to argue about his decision. There was very little cheering from the largely pro-Joshua crowd at the moment the fight was stopped. The fans were shocked.

Going into the match, it was a forgone conclusion that Joshua would win in spectacular fashion. Things fell apart for the 29-year-old 2012 Olympic gold medalist Joshua after he was clipped by a left hook from Ruiz Jr. in the third round that he didn’t see coming. Moments before that, Joshua had knocked Ruiz Jr. down with a thunderous left hook to the head.

Joshua went for the finisher, and got caught by a hard left hand from Ruiz Jr. Joshua admitted afterwards that he never recovered from that shot. Ruiz Jr. then dropped Joshua twice in the third round, and went on to stop him in the seventh round.

“One shot on the top of the dome rattled me,” said Joshua to skysports.com. “I tried to stay in there for a few more rounds. I just didn’t recover in time.”

If Ruiz Jr. had continued to box Joshua like he’d done in rounds four through six, there’s a chance that he would have recovered. Ruiz Jr. wasn’t going to let Joshua recover, that was the problem. Ruiz Jr. had the better engine, and he would have likely unloaded on Joshua in rounds four, five or six if he had been under any kind of pressure from him. Ruiz Jr. turned up the heat on Joshua in the seventh, and got him out of there fast. The combination punching that Ruiz Jr. showed in the seventh round was beautiful to behold. He unloaded on Joshua with punches that he had no resistance to.

AJ says he was more hurt than tired last night after the third round, but he looked exhausted. Joshua’s arms and legs looked like they were rubbery. He looked like he’d shot all his fireworks in round three when he tried to knockout Ruiz Jr. after knocking him to the canvas with a left hand. Joshua tensed up while trying to KO Ruiz Jr., and that seemed to take a lot out of him. Joshua doesn’t stay relaxed when fighting like other heavyweights. He tenses up, and that takes a lot out of him physically, making him vulnerable against guys that he would otherwise have an easy time against.

“My legs were all over the gaff – I was trying to stabilize my mind and my whole body. It’s the first time [that has happened]. The one with [Wladimir] Klitschko; I was just tired,” said Joshua.

Ruiz Jr., 29, was brought in as the replacement for American Jarrell ‘Big Baby’ Miller, who tested positive for banned substances while preparing for the fight with Joshua. Matchroom Boxing promoter Eddie Hearn tried to sign former world title challenger Luis ‘King Kong’ Ortiz as the substitute, but he asked for too much money.

The way Joshua fought last night, he would have likely been knocked out by the 40-year-old Ortiz as well. Joshua’s looked like he was only physically capable of fighting hard for a partial round. Joshua was gassed from expending energy in an exchange of punches with Ruiz Jr. in the third round. It looked eerily similar to how Joshua faded after a brief flurry of shots in the second round of his fight with Dillian Whyte in 2015, and in the sixth round of his match against Wladimir Klitschko in April 2017.

Joshua in denial about his conditioning problems

What was disappointing was how Joshua seemed to be in full denial about his conditioning problems after the fight. He blamed his loss on him being hurt, and completely ignored how physically tired he looked. Joshua looked tired even in the first round, which isn’t surprising because of his heavy bodybuilder’s physique. Joshua is simply carrying around too much muscle for him to be able to compete in the sport of boxing, which requires a lot of aerobic activity.

“They can’t box with me so they just look for power shots. I have to work on being stronger on my base,” said Joshua.

The blueprint to defeat Joshua had already been created many years ago by Whyte in 2015, but his subsequent opponents weren’t clever enough to follow the plan until last night. Ruiz Jr. and Whyte showed that the way to beat Joshua is to get him caught up in physically draining exchanges. Joshua gasses immediately every time he’s forced to fight in that manner. If he’s unable to knockout his opponents during these short bursts of activity, he’s at risk of fading quickly.

The thing with Joshua is he STAYS tired for many rounds after he gasses. He’s not someone that is able to come back the next round at full strength. In other words, Joshua’s recovery powers are virtually nonexistent. He takes too long to recover after he gasses out. Whyte exposed that flaw in Joshua’s game initially, and Ruiz Jr. showed last night that the problem still exists.

There’s a very real possibility that Joshua will never “come back” from this loss to Ruiz. You hate to say it, but everyone that Joshua faces from this point forward is going to be looking to throw multiple combinations at him to force him to exhaust himself. It obviously won’t work for everyone that tried that strategy, because they’ll get caught by one of Joshua’s shots and hurt. But for any fighter that has a decent chin, they’re going to be a real problem for Joshua moving forward.

It looks like Joshua wants the immediate rematch with Ruiz Jr. in the UK. This could be bad news for Joshua, Hearn and his Matchroom Boxing promotional company. If Joshua loses to Ruiz Jr. again, Hearn may end up having to give away tickets to AJ’s future fights.