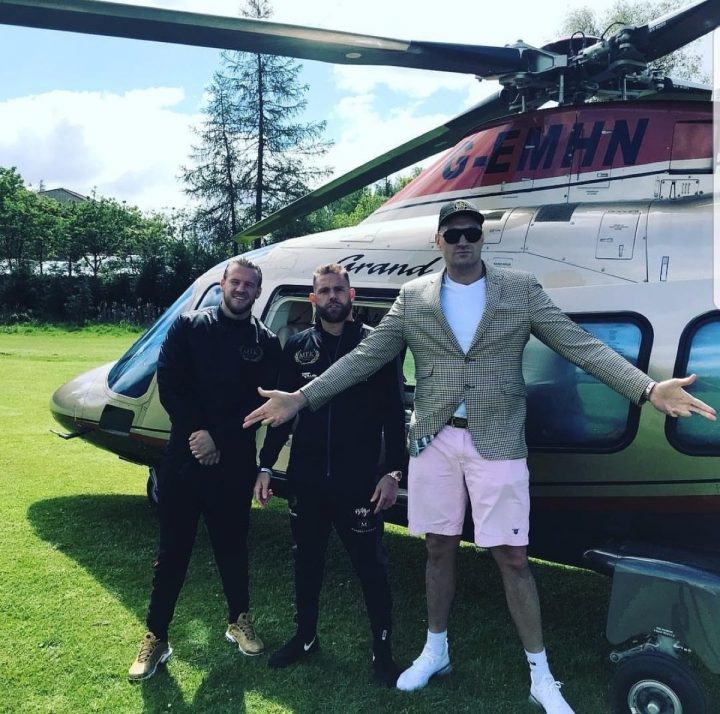 Billy Joe Saunders, Tyson Fury and their trainer, Ben Davison arrived at Stevenage in style when they attended their public workout which took place in front of hundreds of local supporters outside Stevenage FCs’ Lamex Stadium- the location for Billy Joe Saunders vs Shefat Isufi on May 18.

Local Hertfordshire boxer, Saunders, will attempt to become a two-weight world champion when he faces the Munich-based Albanian, Isufi.

The WBO World Super Middleweight title will be on the line on May 18th, and Billy Joe Saunders arrived workout-ready after his helicopter journey.

Tyson, however, opted to arrive in a more fashionable outfit- wearing a white tee and blazer, along with a pair of pink shorts.

Fury is now just six weeks away from his Las Vegas fight night at the MGM Grand, where he faces undefeated German Tom Schwarz.

Billy Joe Saunders and Tyson Fury entertained the hundreds in attendance which saw Ben Davison put both of his fighters through their paces on the pads, whilst they also took turns on the microphone to entertain the crowd.

“I’m feeling good, it’s good having Tyson in camp, both training hard and we’re both pushing each other on for our upcoming fights.” said Billy Joe Saunders on the Lamex Stadium pitch before the local football team’s crucial match against Cheltenham Town.

“It’s a fantastic stadium, a good venue for my fight- it’s my homecoming and I am very excited to be fighting at Stevenage football club.

When asked about his opponent, Shefat Isufi; “I know that my opponent is getting his face punched in on May 18th and that’s all you need to know about him!

“But seriously, he’s a strong lad, but he won’t bring anything I haven’t seen before.”

Tyson Fury joined his stablemate onto the pitch holding a Stevenage FC scarf above his head, which was received with a massive cheer by the local supporters inside the Lamex Stadium.

Jacobs: I did enough to beat Canelo »