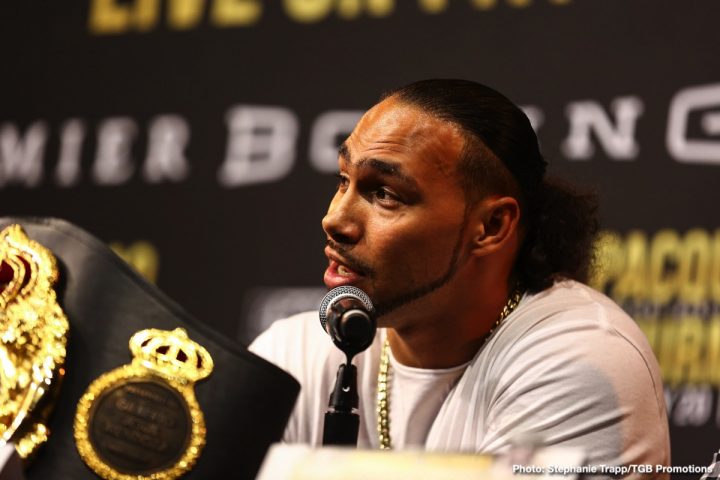 By Chris Williams: Keith ‘One Time’ Thurman refuses to guarantee that his next contest after his July 20th match against Manny Pacquiao will be a unification fight against IBF welterweight champion Errol ‘The Truth’ Spence Jr. later this year.

Thurman (29-0, 22 KOs) says he’s not a “fan” of planning future fights, and he thinks there’s a possibility that he and the 40-year-old Pacquiao (61-7-2, 39 KOs) could be fighting a rematch if he beats the senator from the Philippines like he thinks he will on July 20. Thurman says there’s a rematch clause in place that Pacquiao could exercise if he defeats him.

WBA ‘regular’ welterweight champion Pacquiao and WBA Super World champion Thurman will be fighting on Fox Sports pay-per-view on the 20th of July at the MGM Grand in Las Vegas, Nevada. The two welterweights met earlier on Tuesday at their kickoff news conference in New York to talk about their fight on this summer on July 20.

“No, I cannot guarantee anything,” Thurman said to Fighthub when asked if he’ll guarantee that he’ll be fighting a unification match against the likes of Errol Spence Jr. in his next fight after his match against Manny Pacquiao. “I’m not a fan of talking about the next fight. This is not football. This is not basketball. There is no scheduled season. There’s nothing on paper. I look forward to unifying. I’ve unified before [against former WBC welterweight champion Danny Garcia in 2017]. I will unify again, but there’s also a rematch clause in this fight [with Pacquiao]. So, Pacquiao can exorcise that right if he feels fit to,” Thurman said.

The way that the 30-year-old Thurman is talking, he sounds like he’s hopeful that Pacquiao will insist on the rematch if he beats him on July 20. That would not only give Thurman a chance for a second big payday against the 40-year-old Pacquiao, but it would also delay a unification fight between him and Errol Spence Jr. As long as Thurman is wrapped up in fights with Pacquiao, he has an excuse to tell the boxing public about why he’s not fighting Spence. If the fans give Thurman grief about him not fighting Spence, he can tell them that Pacquiao exercised his rematch clause, and that he HAS to fight him again.

If Thurman loses to Pacquiao, then he’s off the hook as well in having to fight Spence, because he’ll no longer be the World Boxing Association 147-pound champion. He’ll just be another one of the many contenders in the welterweight division. As far as Pacquiao goes, Thurman sounds like he’s REALLY hoping that there will be two fights between them. If there’s just one fight, then Thurman will be expected to fight Spence next if he’s the winner of the Pacquiao fight.

Spence is facing WBC welterweight champion Shawn Porter in a unification fight this summer. Spence will likely win that fight. Unfortunately, Porter is looking old and shot, and not the guy that he was four years ago. Porter was fortunate not to lose his last fight against Yordenis Ugas.

“I’m trying to take the performance, even though there’s no problem picking up two paychecks,” Thurman said. “I would like him [Pacquiao to respectfully know he’s legend. He’s accomplished so much from where he’s come from in the Philippines to becoming champion of the world to becoming senator of the Philippines. Nobody can take away anything from what Manny Pacquiao has accomplished, but after my victory on the 20th, we could look into negotiations for a unification bout,” Thurman said.

The predictable fights for Thurman to make after Pacquiao are as follows: Danny Garcia and Shawn Porter. Thurman’s wins over Porter and Garcia were close enough affairs for there to be rematches for both fights. It’s predictable that Thurman will take both of those fights before he considers putting together a unification with Spence. At this point, Thurman might lose to both Porter and Garcia.

The fans have wanted Thurman to commit to a fight with Spence since 2016, but ‘One Time’ has continually put the fight off. The initial excuse in 2016 was Thurman wanted to wait until both of them were world champions before they fought each other. Spence has been a world champion for two years now, and Thurman still hasn’t fought him.

“Pacquiao, who has fought Floyd Mayweather, that will be the second opponent for me to compare my skills as comparison to Mayweather as far as overall performance,” Thurman said. “A lot of people didn’t enjoy the Floyd Mayweather-Pacquiao fight. I can guarantee them they’re going to enjoy the Keith Thurman-Pacquiao fight, because Keith Thurman is a different type of breed. He’s a different kind of fighter. Manny is 40-years-old, and he has something to prove. I’ve been inactive for almost two years. I’ve had just one comeback fight. I still have something to prove. When I came back, I told everybody, ‘This is a get back year.’ Defeating Manny Pacquiao is part of me getting back,” Thurman said.

Thurman is still comparing himself to Mayweather

It’s ridiculous for Thurman to be comparing himself to Floyd Mayweather Jr. at this stage in his career. That boat has sailed. At 30, it’s crystal clear that Thurman is NOT going to match what Mayweather did in his career. By the time Mayweather was Thurman’s same age at 30, he’d already captured five division world titles, as well as a bronze medal in the 1996 Olympics for the U.S. Mayweather was arguably robbed in the Olympics in losing a controversial 10-9 decision to Serafim Todorov of Bulgaria. That was a completely one-sided fight with Mayweather hitting the much slower Todorov at will with shots, and the judges not giving him points for all the shots shots he was nailing him with. Instead of Thurman comparing himself to someone like Mayweather, he needs to look someone that accomplished much less. Thurman’s career is more comparable to Fernando Vargas, but definitely not Mayweather.

“Keith ‘One Time’ Thurman does not just beat Manny Pacquiao, he does knockout Manny Pacquiao,” Thurman said in speaking in the third person. “I’m tired of people believing that I don’t have the power that I once had, that, ‘Keith is not the same fighter, that Keith got married, he’s wifed up, he just doesn’t have the fire no more.’ I believe in the sport of boxing, when you watch a fighter perform, that performance is based off of that training camp. I know I’ve trained hard as an athlete. It’s not something that everybody can do, but I’ve not been the best Keith Thurman that I can be. Knowing that consistently, even in the Danny Garcia fight, it was a good Keith Thurman, not the best Keith Thurman. Shawn Porter, not the best Keith Thurman. Josesito Lopez, not the best Keith Thurman. So, it’s not about what the fans have said, it’s about my love, my passion for the sport of boxing. I’m tired of not seeing me at my best. Come July 20th, you will see the best Keith Thurman. It’s not just the performance. It’s about going into one camp, and then another camp. It’s taking the momentum of being an active athlete. Let’s say I fight Josesito Lopez, and that fight happened in January, and let’s say I wasn’t fighting Manny Pacquiao, and this press tour was just to announce the fight. And really, I’m fighting Manny Pacquiao in January again; that’s another long layoff. It would kill the momentum. I’m staying active, and staying strong. He also fought in January. We’re both coming off of momentum. So I believe when I’m fighting Manny Pacquiao, even at the age 40, he may be able to perform better against me than he did against Adrien Broner, but I know with my skills and my talent, it’s just too much for Pacquiao to handle. I have the reach, I have the size, and I have the IQ. Once when he starts getting touched, like Ben Getty said, ‘They all move backwards,” Thurman said.