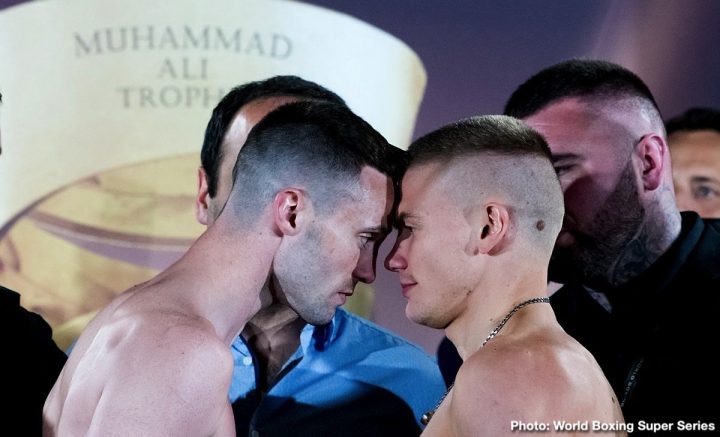 Where to watch the Taylor vs. Baranchyk and Inoue vs. Rodriguez fights? Both fights will be streamed live on DAZN, and shown on Sky Sports. The event will start 2:00 p.m. ET.

In a bad sign, Taylor (14-0, 12 KOs) weighed in over the light welterweight limit at 140.2 pounds during his first weigh-in attempt. Since the scales were digitical, Taylor didn’t seem to be aware at the time that he’s come in over the limit. He even drank water and did a face off with IBF light welterweight champion Baranchyk (19-0, 12 KOs). When Taylor realized that he’d missed weight, he went back to the dressing room and worked off the extra weight, and returned an hour later weighed in successfully at 140 lbs.

Even the little bit of weight that Taylor, 5’11”, was over could be a problem for him. It’s not all that surprising that Taylor is starting to have problems making weight for the light welterweight division. He’s 28-years-old, and is huge for the division. He doesn’t want to move up to fight guys his own size, so he’s struggling to make the weight. It’s going to catch up to Taylor sooner or later, and it might be this weekend. Taylor’s body is telling him something with him coming over weight. He needs to move up to 147 to fight where he belongs. If Taylor loses to Baranchyk or Regis Prograis, he likely will see the light, and make the decision to go up in weight to welterweight, for better or for worse.

“I feel great,” said Taylor despite having missed the weight initially. “I can’t wait to get my hands on him and get the title to Scotland.”

We’ll see on Saturday how great Taylor is, because Baranchyk, 26, is going to be taking the fight to him nonstop looking to wear him down and score a stoppage like he did in his quarterfinal fight against Anthony Yigit. It’s going to be a fast pace fight from start to finish. If Taylor is feeling the effects of having boiled down to 140 from a the 160s, he’s going to have problems against the leaner Baranchyk, who doesn’t back on a massive amount of weight in between fights. Baranchyk is a natural light welterweight.

“I feel great,” said Baranchyk. “I am ready, I am excited. I will win that’s one hundred percent!“

Baranchyk is the underdog in this fight. He’s facing the 2012 Scottish Olympian Taylor in his hometown of Glasgow. It could be bad news for Baranchyk is he’s unable to knockout Taylor. Former WBC light welterweight champion Viktor Postol found himself on the receiving end of a set of wide scores in favor of Taylor in their fight last June in Glasgow. Taylor appeared to win the fight, but not by the ridiculously wide scores that were turned in by the judges. They scored it 117-110, 118-110 and 119-108. Hopefully there’s no crazy scores in this fight like the ones we saw in the Taylor vs. Postol fight. For Taylor to get credit for his wins, the scoring has to make sense. 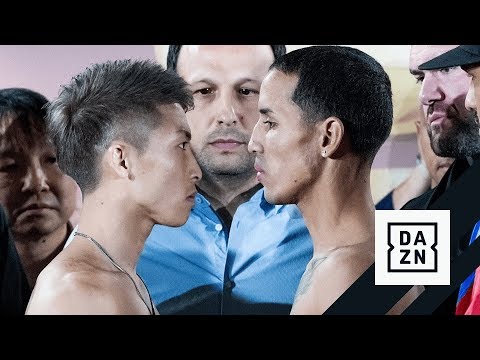 “He looks like he is in great shape,” said Inoue. “He is a good fighter and we expect a tough fight.”

Inoue, 26, has been knocking everyone out in the first round since he moved up to the 118 lb. division in 2018. In Inoue’s two fights in the bantamweight class, he’s stopped former WBA bantamweight champion Jamie McDonnell and Juan Carlos Payano in the first round. Inoue looked unstoppable right now. It’s going to take someone special to beat the Japanese knockout artist. Whether that’s Rodriguez is the big question. Rodriguez is a talented fighter from Puerto Rico. He struggled in winning his quarterfinal fight in the WBSS tournament in beating Jason Moloney by a 12 round split decision last October. The fight was a lot tougher than many boxing fans expected it would be. Rodriguez won, but just barely.

“Tomorrow I will still be champion of the world!” Rodriguez said.

It would be a huge surprise if Rodriguez pulls off an upset on Saturday against Inoue. Someone is going to beat Inoue sooner or later, but it’ll likely a talent like the southpaw Luis Nery or perhaps Nonito Donaire if he can land one of his big left hooks on the button. 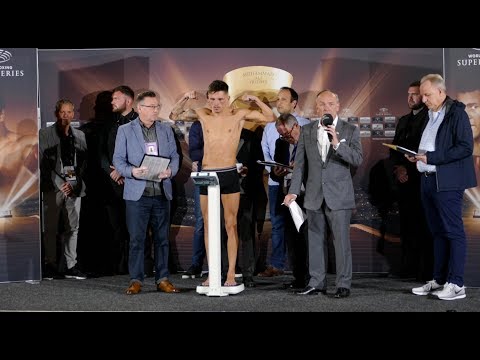