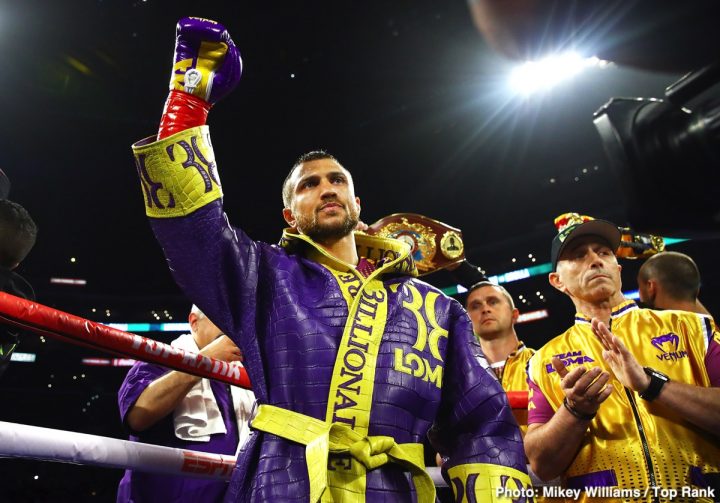 By Chris Williams: Ring Magazine has put together a new updated top 10 pound-for-pound list of the elite fighters that they feel are the best in boxing. It’s a controversial unfortunately. It includes Mikey Garcia, who was recently soundly beaten by Errol Spence last March. The lack of effort on Mikey’s part in that fight has many boxing fans believing he was just there for the payday.

Ring Magazine’s list includes WBO welterweight champion Terence Crawford at #2 despite the fact that he still hasn’t fought an elite level fighter at 147, and he never fought an elite fighter at 140 or 135. Crawford’s wins in those divisions were against guys like Ray Beltran, John Molina and Julius Indongo. Crawford never fought the talented guys like Regis Prograis, Josh Taylor or Maurice Hooker at 140.

There’s nothing wrong with having Vasyl Lomachenko as #1 on Ring Magazine’s pound-for-pound list, as he’s shown that he deserves to be at the top spot in the rankings. However, from that point on, the list goes haywire with pure lunancy with fighters with padded records filled with weak opposition ranked high on the Ring Magazine P-4-P list, while guys with records filled with better opposition are ignored.

Here’s this writer’s break down of the Ring Magazine list:

1. Vasyl Lomachenko: He’s perfect right where he’s at at the top spot in the rings. He’s shown that he’s an elite level fighter in winning world titles at 126, 130 and 135. Along the way, Lomachenko has beaten some talented fighters in Guillermo Rigondeaux, Nicholas Walters, Ramon Martinez, Gary Russell Jr., Jorge Linares and Jose Pedraza.

2. Terence Crawford: This isn’t a good spot for Crawford given his lack of quality wins at 140 and 147. Crawford’s only victories at welterweight are against a shot Amir Khan, who he stopped on a foul last April, Jose Benavidez Jr. and Jeff Horn. Those are NOT elite level guys at welterweight. Crawford has beaten three mediocre fighters at 147, and now he’s number #2 on Ring Magazine’s pound-for-pound list. It doesn’t make sense. Crawford’s wins at light welterweight were against these fighters: Julius Indongo, Thomas Dulorme, Viktor Postol, Dierry Jean, Hank Lundy, Felix Diaz and John Molina Jr. Those aren’t elite level guys at 140, are they? As such, Crawford has failed to beat one elite level fighter at light welterweight or welterweight. That’s why this writer doesn’t believe Crawford should be on Ring Magazine’s pound-for-pound list at all, period. If the idea is to rank fighters based on wins over elite level opposition, Crawford has failed.

3. Canelo Alvarez: He’s another one that doesn’t rate his spot on the list. His two fights with Gennady Golovkin were considered losses in the eyes of the boxing public. I personally had Canelo winning the second fight with GGG, but it razor close. It was not an impressive performance in the least by Alvarez. I had Golovkin winning the first fight with Canelo by an eight rounds to four margin. The scoring for the fight was appalling. With all the taint surrounding Canelo’s fights with GGG including his controversial wins over Erislandy Lara and Austin Trout, this writer doesn’t believe that he deserves to be ranked in the top 10 on the pound-for-pound list. There’s too much taint there for Canelo’s biggest wins of his career, and those those are his biggest wins. Even Canelo’s victory over Miguel Cotto was controversial.

4. Naoya Inoue: This is a fighter that hasn’t beaten anyone good as of yet in his career. He beat a bunch of nobodies at 112 and 115. Now that Inoue has moved up to 118, he’s beaten some flawed fighters in Emmanuel Rodriguez, Jamie McDonnell and Juan Carlos Payano. Until Inoue beats someone good at bantamweight like Nonito Donaire, Luis Nery, or Zolani Tete, he doesn’t belong in the top 10 of the pound-for-pound ratings. Inoue’s best wins at 115 were against Antonio Nieves, Omar Andres Narvaez and David Carmona. Inoue left the super flyweight division without fighting the good opposition in Sriskaet Sor Rungvisai, Juan Francisco Estrada or Jerwin Ancajas.

5. Oleksandr Usyk: This fighter is coming from a weak division at cruiserweight. The division is too flawed to have him on the list. Usyk didn’t look good in his best wins of his career against Michael Hunter, Tony Bellew and Mairis Briedis. He looked timid, and he his fighting style was less than entertaining to watch.

6. Errol Spence Jr.: This is a good choice for the list. Spence should be at #1 in the pound-for-pound list in this writer’s opinion. Spence has proven himself against the best, and looked sensational every time out. His recent wins over Mikey Garcia and Lamont Peterson were exceptional performances.

7. Gennady Golovkin: He arguably should be still unbeaten. GGG deserves to be #2 on the pound-for-pound list

8. Juan Francisco Estrada: This is a guy that didn’t look that great in his two best wins of his career against Rungvisai. For that reason, he shouldn’t be on the pound-for-pound list. He ran from Rungvisai in their first fight last year. In their rematch, Estrada fell apart when Rungvisai started taking the fight to him in the second half of the contest last April. You can call that fight a draw.

9. Mikey Garcia: This is easily the worst name on the list. Mikey doesn’t rate being on the pound-for-pound list the way that he fought against Spence last March. It looked like Mikey was there to survive for 12 rounds. When you compare that performance to the warriors from the past, who when moving up in weight to take on bigger fighters, they were willing to go out on their shield. Roberto Duran and Sugar Ray Leonard comes to mind. Mikey fought in the opposite manner from those greats. Mikey looked like he just wanted to go 12 rounds to make sure he didn’t get knocked out.

10. Donnie Nietes: This is a good fighter. Nietes definitely belongs in the list in the top five.


« Zab Judah vs. Cletus Seldin on June 7 in Verona, NY

Devin Haney ready for DAZN debut in Maryland on Saturday »