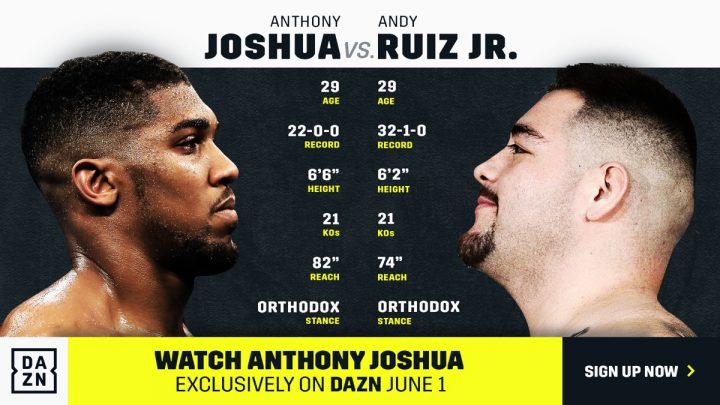 By Tim Royner: Anthony Joshua isn’t doing much talking about his opponent for this Saturday Andy Ruiz Jr. for some reason. Joshua (22-0, 21 KOs) focusing most of his attention on talking about WBC heavyweight champion Deontay Wilder and Tyson Fury, complaining about how the two aren’t fighting him.

Joshua will be defending his IBF/WBA/WBO heavyweight titles next Saturday night in six days from now on June 1 against the 29-year-old Ruiz Jr. If Joshua wasn’t excited about Ruiz Jr. being the replacement for Jarrell ‘Big Baby’ Miller, then he should have spoken up and told Matchroom Boxing promoter Hearn to find him an opponent that he could get motivated for. The way that Joshua isn’t talking about the fight with Ruiz Jr., it makes you wonder if he’s ashamed that he’s taking this fight. Joshua could have fought Luis Ortiz if he had given him the money he wanted to take the fight. But talking about Fury and Wilder isn’t going to make his match with Ruiz Jr. bigger.

Whether Joshua has been told by his promoter Eddie Hearn to speak more about Wilder and Fury this week than his less than slender-looking opponent Ruiz Jr. (32-1, 21 KOs) is unclear. Since there’s not a lot of interest from the U.S fans in Joshua’s fight with Ruiz Jr., it appears that he’s taken a different tact in electing to talk about Wilder and Fury. What Joshua is doing is called ‘name dropping’, and it’s something that fighters often do when they’re matched against an opponent that the fans have no real interest in. Instead of talking up that fight, the fighters talk up fights against other guys to try and get fans interested.

“I don’t know what they are waiting for. They’re coming to the end of their careers, The longer they leave it – and I don’t think either of them are going to get much better – it will be worse for them,” Joshua said to the Telegraph.co.uk about Wilder and Fury supposedly getting older. I’m not the finished article yet. I’m still improving, working on my skills, getting better all the time.”

Joshua doesn’t look like he’s getting better. He was hurt in his last fight by Alexander Povetkin, and before that he didn’t look impressive against Joseph Parker, Carlos Takam or Wladimir Klitschko. If Joshua is making improvements, it’s minor stuff. It’s not enough to say that he’s good enough to beat Fury or Wilder. If those fights happen now, you’d have to favor both of them to beat Joshua.

Fury, 30, is only one year older than the 29-year-old Joshua. You have to ask whether Joshua has thought out what he’s saying before he speaks in interviews. Wilder is only 33, which is just four years older. He’s hardly old. With Wilder having the better hand speed, he seems to be aging better than Joshua, who isn’t that fast and has injury problems.

Joshua should focus his attention on his fight against Ruiz Jr. for next Saturday. That’s the task at hand. If Joshua loses that fight, then he can forget about his dream fights against Fury and Wilder.

The reason why Joshua isn’t fighting Wilder and Fury, because Hearn has openly admitted that they wouldn’t be getting a 50-50 split. It’s unclear what Fury wants to fight Joshua, but it’s likely a 50-50 deal, the same that Wilder is asking for. As long as Joshua is willing to give those fighters parity, the fights can be made in the future. But until that happens, it’s better for Joshua to focus on the fighters that his promoter Hearn schedules him to fight instead of name dropping left and right in using Wilder and Fury’s name to get the boxing public interested in his simple title defenses.