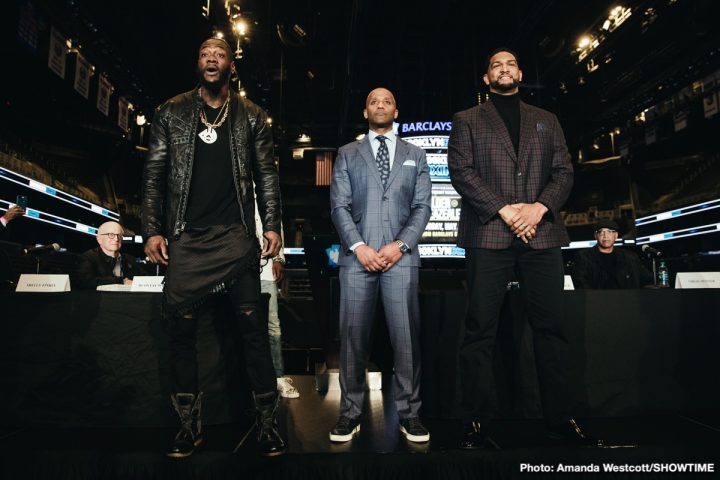 By Mark Eisner: Anthony Joshua expects WBC heavyweight champion Deontay Wilder to send mandatory challenger Dominic Breazeale crashing down to his second career this Saturday night on May 18th in their fight on Showtime Championship Boxing at the Barclays Center in Brooklyn, New York.

IBF/WBA/WBO champion Joshua will be watching avidly to see how Wilder deals with the 6’7” Breazeale (20-1, 18 KOs), who he defeated three years ago by a seventh round knockout in June 2016 in London, England.

Joshua is obviously hoping that Wilder (40-0-1, 39 KOs), because that’ll keep him moving forward in the direction of an eventual unification match between them in the near future. There will be a lot more interest from fans in a fight between him and Wilder than there would in a rematch against Breazeale. It would be a hard sell to try and get fans up for a rematch between Joshua and the 33-year-old Breazeale.

“Yeah, yeah 100 percent,” Joshua said to skysports.com about him tuning in this Saturday to watch the Wilder vs. Breazeale fight. “Styles make fights, I think Wilder will fare well against Breazeale. I think Wilder is too quick, he’s a very, very fast heavyweight, but Breazeale is tough, took me seven rounds. I hope Wilder does it in nine, so I can be like ‘hey I done it earlier’. You know how it is, comparisons and stuff, but yeah it will be interesting to see.”

The fans won’t put too much emphasis on on Wilder taking longer to stop Breazeale than Joshua did. If Wilder takes longer to stop Breazeale, it won’t result in the fans saying that Joshua is the better than him. Wilder is the type that takes his time in his fights before he gets warmed up. We saw that in his recent fight against Tyson Fury, as well as in many of his other contests against the likes of Artur Szpilka, Eric Molina, Luis Ortiz and Chris Arreola. But if Breazeale comes out fast on Saturday night looking to slug, then we could see an easy night with Wilder knocking him out right away. Wilder, 33, is a lot more aggressive when his opponents start fast against him. It puts him in a position where he’s not cautious. That could be good or bad for Wilder depending on if his chin holds up.

Joshua will be fighting next month in defending his titles against American Andy Ruiz Jr. (32-1, 21 KOs) on June 1 on DAZN and Sky Sports Box Office at Madison Square Garden in New York. Ruiz Jr. is a fringe contender, who doesn’t look the part of a world class heavyweight, but he possesses fast hands and he possesses respectable punching power. The 29-year-old Ruiz Jr. was picked out by Joshua’s promoter Eddie Hearn. He likes his talent, and feels that the American boxing fans would be more interested in watching the Joshua fight with him as the contender rather than someone else. Wilder, 6’7”, will likely be watching the Joshua vs. Ruiz Jr. fight on June 1, taking notes in looking for weaknesses that he can exploit for when the two face each other.

Wilder needs a win over Breazeale to get the big money rematch against Tyson Fury. Those two could face each other in late 2019 or early 2020. A loss for Wilder against Breazeale would be disastrous. It would get in the way of his Fury and Joshua fights, which will both be pay-per-view matches in the U.S. Breazeale hits hard enough to KO Wilder if he can nail him cleanly like Luis Ortiz did last year in their fight in March 2018. Ortiz caught Wilder with a perfect left to the head in the seventh round that staggered him. Wilder was able to weather a huge storm of shots from Ortiz to make it through the final moments of the round. Wilder was still hurt in the eighth round, but the hard hitting Cuban Ortiz was too exhausted to take advantage of it. Wilder was able to regroup and come back and hurt Ortiz in the ninth round, and stop him in the 10th.

It’s generally believed that Breazeale must come out with both barrels blazing on Saturday night for him to have a chance of winning this fight against Wilder. The 6’7″ Breazeale has the size to compete against Wilder, but he doesn’t possess the hand speed or the punching power to win this fight unless he goes all out in the first three rounds. You can’t count out Breazeale. He started fast in his stoppage wins over Amir Mansour and Izuagbe Ugonoh. Both of those fighters were trying to KO Breazeale with every punch they threw, and they had him on the canvas, but they couldn’t keep him there. If Wilder drops Breazeale like he did against Tyson Fury in the 12th round, it’s going to be next to impossible for him to survive the round.