Joshua comments to Wilder’s KO of Breazeale, and wanting “body” on resume 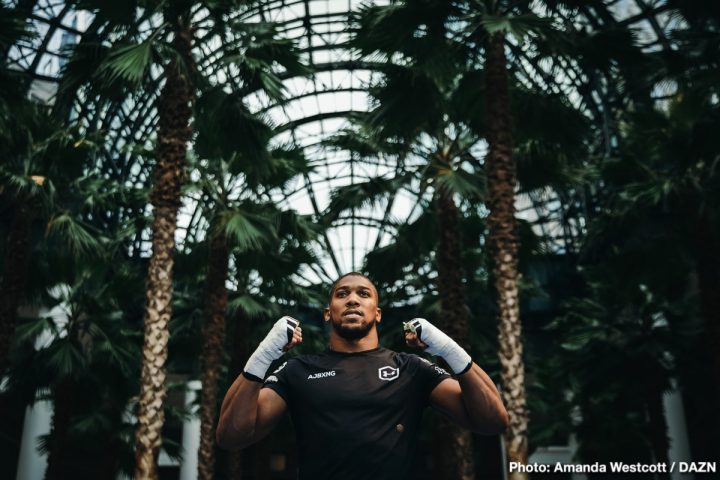 By Mike Perez: Anthony Joshua took it easy on Deontay Wilder when asked about his knockout win over Dominic Breazeale, and his remark about wanting a “body” on his record. Joshua took the high road, smothering Wilder with compliments rather than taking shots at him, and coming off as bitter, jealous and petty.

Although Joshua isn’t willing to admit it, WBC heavyweight champion Wilder (41-0-1, 40 KOs) has put huge pressure on him for his fight this Saturday night against Andy Ruiz Jr. (32-1, 21 KOs) at Madison Square Garden in New York. Joshua (22-0, 21 KOs) will need a showstopping highlight reel knockout of his own for him to measure up to what Wilder did.

Joshua pouring praise over the head of Wilder

Sensational, really good,” Joshua said to Fighthype when asked what his thoughts were on Deontay Wilder’s first round knockout win over former foe Dominic Breazeale on May 18. “That right hand landed flush on the jaw, and Dominic tried to get up, but failed. It just shows it landed right. The technique was spot on, and he got the win. He’s now on the road to the undisputed,” Joshua said.

Considering that it took Joshua seven rounds to stop Breazeale in 2016, it’s impossible for AJ not to praise Deontay for a job well done. As far as Wilder on the “road to the undisputed,” not so fast, Joshua. You still have work to do against 29-year-old Ruiz Jr. on Saturday night in New York, and once that’s out of the way, then the hard part begins with the negotiating of the Wilder fight. Joshua can make it easy by giving Wilder the 50-50 split that he wants right now, so the rest of the negotiations are effortless. Will Joshua do that? Probably not. As such, look for another year of name dropping by Joshua and his promoter Eddie Hearn.

“Not necessarily, but that’s what we do as heavyweights,” Joshua said when asked if he wants to attempt to score a knockout against Andy Ruiz Jr. that is similar to Wilder’s stoppage win over Breazeale. “Wilder is Wilder. I am my own man. I do things my way. If I do things my way, you’re probably going to see a devastating knockout anyway. That’s just what we do,” Joshua said in talking about how heavyweights tend to score brutal knockouts.

Joshua not willing to admit that he wants to score a knockout like Wilder, it sure does look like he didn’t want to compliment him a little too much. Joshua isn’t a one-punch fighter like Wilder. It normally takes Joshua lot of shots for him to score a knockout, and that’s with him fighting guys like Carlos Takam, Alexander Povetkin, and Wladimir Klitschko. Joshua will never be a knockout fighter that Wilder is. AJ doesn’t punch hard enough, and his hand speed is lacking.

“It’s the fight business. It’s not really the political arena, is it?” Joshua said in response to a question of what he feels about Wilder’s comment about wanting a “body” on his resume before he retires from boxing. “Say what you want. Say and do what you want to do, as long as it’s within the guidelines. It’s a free world with free speech. He voiced his opinion. He went in there and done his business. He didn’t kill him, so it is what it is,” Joshua said about Wilder’s “body” remark.

There’s not much anyone can say about Wilder making a comment on wanting a body. Since it’s his personal opinion about him wanting a body, it’s hard to take a stance on that subject. Wilder is talking about fighting within the rules of boxing, and you can’t take away free speech.