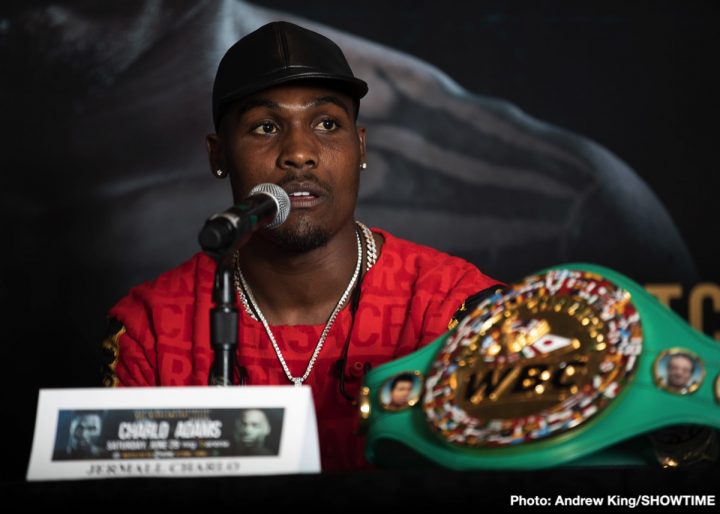 By Dan Ambrose: Jermall Charlo says he’s going to use the spotlight that will be on him on June 29 to call out WBC middleweight champion Saul Canelo Alvarez and Demetrius Anrade after his fight against Brandon Adams on Showtime. The fight card begins at 9:00 p.m. ET/6:00 p.m. PT.

Charlo will be giving it one last shot at calling out Andrade and Canelo before he likely moves up to super middleweight. Charlo has a better chance of fighting for world titles against the Premier Boxing Champions fighters at 168.

Jermall not giving Korobov a rematch

Charlo chose not to give Matt Korobov a rematch after beating him by a controversial 12 round unanimous decision on December 22 at the Barclays Center in Brooklyn, New York. A lot of boxing fans thought Korobov deserved the win. The judges scored it for Charlo by the scores 116-112, 119-108 and 116-112. Boxing News 24 had the 36-year-old Korobov winning the fight by eight rounds to four. He was the better fighter of the two, and landed the cleaner shots all night long.

It’s a bad look on Charlo’s part that he’s not trying to clear up the controversy of that decision by fighting Korobov again. It looks even worse for Charlo that he’s taking a considerable step down in competition in fighting the 29-year-old Adams, who has past losses to Willie Monroe Jr. and John Thompson. These weren’t close defeats for Adams. Thompson knocked Adams out in the second round in May 2015. Monroe beat Adams by a lopsided 10 round unanimous decision in May 2014. The scores were 99-91, 99-91 and 99-91. Monroe made it look easy in beating Adams.

As soon as his fight is over with on June 29th against Adams, Charlo says he’s going to call out Canelo and Andrade. Unfortunately, with Charlo looking bad against Korobov, and fighting on different network than Canelo and Andrade, his chances of getting a fight against either of them are beyond poor. Those two fighters are with DAZN, whereas Charlo fights on Showtime for PBC. He’s the interim WBC 160-pound champion, which means at some point the sanctioning body will order Canelo to defend against him. However, the WBC hasn’t shown interest in ordering the fight.

“We’re definitely going to call these guys [Canelo and Andrade] out,” said Charlo to Fighthype. “We’re going to ask these guys one more time of they want to fight. If not, we’re going to go chase somebody else. Then they’re going to want more belts. I’ll be a three time division world champion. That’s what we’ve got to do. They’re running. Why would I be the mandatory? I’m making my own on money. I’m going to keep doing what I’m doing,” said Charlo.

A good move for Charlo to take would be for him to vacate his WBC middleweight title, and start fighting better opposition. Charlo is perceived by fans as having gotten a gift decision over Korobov by virtue of being the A-side for that fight. Korobov is an old guy, and he outclassed the younger Charlo last December. Charlo has been the WBC mandatory challenger since 2017, but he’s in a bad position to get fights against guys like Andrade, Canelo and Gennady Golovkin now they’ve signed with DAZN. Charlo chose not to follow those fighters over to DAZN, so now he’s out in the cold, fighting on Showtime against the likes of Adams and Korobov.

The next move in Charlo’s career is for him to go up to super middleweight to challenge world champions Caleb Plant, Callum Smith, Anthony Dirrell or Billy Joe Saunders. Charlo has a better chance of getting a crack at one of the world titles at 168. It still won’t be easy for Charlo to dethrone one of those belt holders.

There are a lot of good options for Charlo at 168 against the following PBC fighters:

Charlo should have moved up in weight to super middleweight two years ago. If Charlo had moved up to 168 in 2017, he likely would be world champion now, and in a better position with his career. He’s made the wrong moves in sitting and waiting for WBC middleweight champions Canelo and Golovkin to defend against him.

“They don’t give me the credit that I deserve,” said Charlo. “I’ve got to let them know that Brandon Adams isn’t going to stop anything what I’ve got going on. He’s got a fighter’s [puncher’s] chance. If I don’t come with my A-game, and bring my P’s and Q’s, then I have something to worry about. I’ve trained and prepared really well. There’s nothing I have to worry about. I’ve had a couple of fights where guys had the style to make it through the fight,” said Charlo.

Charlo was well respected by a lot of boxing fans until his recent performance against Korobov. Charlo lost a lot of popularity with that fight.

Jermall needs to make a statement against Adams

After his last fight, Charlo has got to do a job on Adams to try and get him out of there quickly. Charlo can’t afford another controversial decision, and he definitely can’t keep moving on without giving rematches. Charlo is hurting his career. He was loading up too much on his shots against Korobov, and getting countered all night long. Adams is a limited fighter, so Charlo should be fine in this fight. But moving forward, it’s not going to be as easy for Charlo once he moved up to 168, and starts facing guys like Benavidez, Callum Smith, Plant and Saunders.

“I’m going to finish this fight. My goal is to make quick work of Brandon and show him that there are levels to this,” said Charlo. “You might be a contender, but it’s another thing to be a champion.”