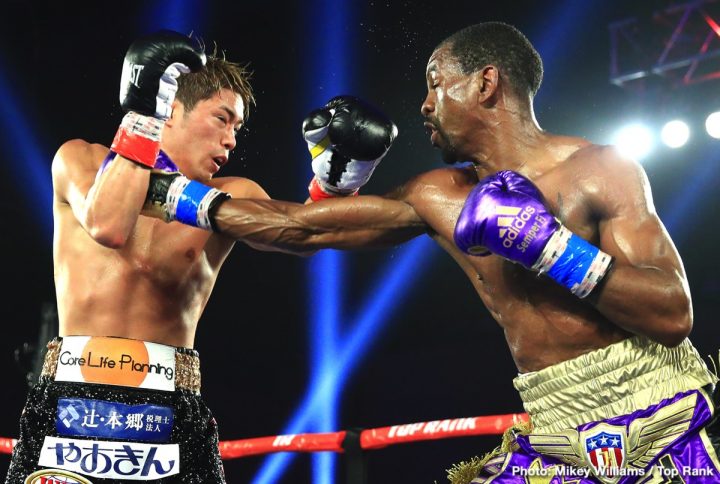 To some fans, they were surprised that Herring pulled out the victory. The reality is, Ito had never proven himself to be the real deal since capturing the WBO 130-pound title with a 12 round unanimous decision victory over Christopher Diaz last year in July. Diaz was a flawed fighter, so it wasn’t surprising that Ito was able to beat him. In Ito’s only successful title defense of his WBO super featherweight title, he beat Evgeny Chuprakov by a seventh round stoppage last December. Ito didn’t prove that he was the real deal by taking on and beating some of the good fighters in the super featherweight division like Gervonta Davis, Miguel Berchelt, Andrew Cancio, Alberto Machado, Eduardo Hernandez or Tevin Farmer.

Former International Boxing Federation lightweight champion Jose Pedraza (26-2, 13 KOs) bounced back from his loss last December to Vasiliy Lomachenko by beating Antonio Lozado Jr. (40-3-1, 34 KOs) by an impressive ninth round knockout. Pedraza, 30, knocked down Lozado Jr. with a hard shot in the ninth. When he got back up, Pedraza flurried on him until the fight was halted by referee Telis Assimenios. The official time of the stoppage was at 2:24 of round nine.

Pedraza says he wants to go after another world title, which is going to be difficult for him to do with Lomachenko still around, winning all the belts one by one.

“I would like to be world champion again at 135, maybe make a title defense and then move up to 140,” a desperate sounding Pedraza said. “Lozada was a tough opponent who came to fight with all of his heart. He was a great test for me, and I passed it with flying colors. I can’t wait to see what is next.”

It doesn’t sound like Pedraza’s feet are firmly planted onto the ground. He’s not going to win any of the titles held by Lomachenko. The one champion that Pedraza can beat at 135 is is IBF champion Richard Commey, but he’s not going to get a shot against him before Lomachenko does. If Pedraza moves up to light welterweight, his lack of punching power is going to be an even bigger issue for him when he starts tangling with the likes of Regis Prograis, Jose Ramirez, Josh Taylor and Maurice Hooker.

This is the same Lozado Jr. that defeated once highly thought of Felix Verdejo by a 10th round knockout last March. Lozado Jr’s career has gone south lately with him fighting to an eight round draw against Hector Ruben Ambriz Suarez (12-10-2, 6 KOs) last August. Lozado Jr. is starting to show.

Other boxing results on the card