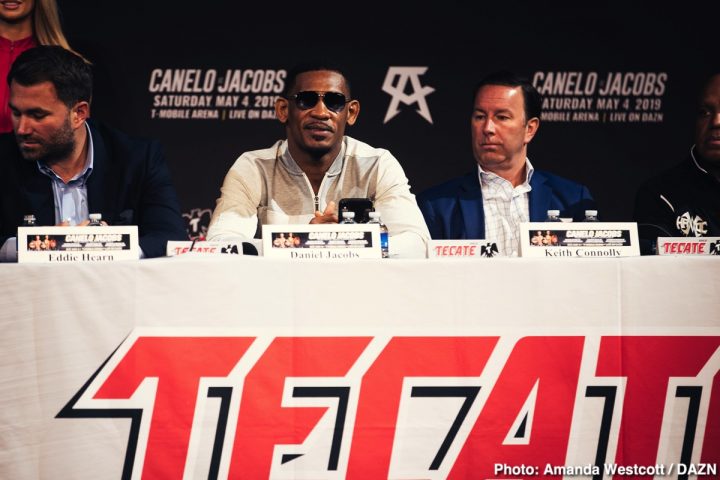 By Dan Ambrose: IBF middleweight champion Daniel Jacobs’ promoter Eddie Hearn says he might pay his weight penalty if he comes in over the 170 pound weigh-in limit for the secondary weight check at 8:00 a.m. this Saturday for his unification fight with WBA/WBC middleweight champion Saul Canelo Alvarez. Golden Boy Promotions put in the contract that the two fighters can only gain 10 lbs from 160 lbs to 170 lbs when they rehydrate after they make weight on Friday at the weigh-in.

According to Jacobs, the weight penalty was initially $200,000 per pound, but it’s been reduced to $100,000. So if Hearn is serious about being willing to pay for Jacobs’ weight penalty for the secondary weigh-in, he could be paying anywhere from $100K to as high as $1.5 million, if the rumors are true that Jacobs rehydrated to 185 lbs for his fight against Gennady Golovkin in March 2017.

If Jacobs badly misses the 10 lb rehydration limit by as a huge amount of weight, Hearn will be helping him out considerably if he pays his penalty. But the good news is that the Canelo-Jacobs fight will take place regardless, and Jacobs will still have his IBF middleweight title when he steps foot inside the ring on Saturday night. As long as Jacobs makes weight on Friday, he’ll keep his IBF 160 lb title.

“The weigh-in will be at 8:00 a.m. on Saturday,” Jacobs’ promoter Eddie Hearn said. “He don’t have to come in at 10 lbs. He can come in over 10 lbs if he wants. It’s still a fight. We’ll see how he feels. There’s penalties. Still, if he doesn’t feel like making it, and he has a bit of change, or I may pay for it. You never know. He won’t lose his [IBF middleweight] belt. He won’t lose the fight,” Hearn said.

The way that Hearn was smiling when he said he would pay for Jacobs’ weight penalty for the secondary weigh-in, it’s unclear if he’s serious about being willing to pay the $100K per pound penalty or if he was just pulling the chains of the boxing media. As big as Jacobs is, it could be a huge penalty if he rehydrates to 180 lbs overnight after making weight on Friday. Jacobs (35-2, 29 KOs) says he’ll be fighting at at around 174 pounds on Saturday night. That’s the weight that he’s been training at during camp. But even at that weight, the penalty would be $400,000 if Jacobs comes in 4 lbs over the 170 lb weigh-in limit for the secondary weight check at 8 AM this Saturday, May 4th.

Would Jacobs choose to rehydrate fully overnight in order to feel strong for the fight if he believes that Hearn will pay for his weight penalty? Jacobs choose not to participate for the secondary weigh-in for his fight against Golovkin in 2017. GGG got up and weighed in for the IBF’s mandated weight check on the morning of their fight, but Jacobs chose not to participate in order to not to have to worry about making weight. Some boxing fans believe this gave Jacobs an advantage for the fight with GGG, because he didn’t need to with hold fluids over night the way he did in order to comply with the IBF’s fight date secondary weight check.

“I don’t know that I would have gotten the fight if I hadn’t accepted the terms that Golden Boy setup,” Jacobs said about the 10 lb rehydration limit that limits both fighters from weighing more than 170 lbs for the secondary weigh-in at 8:00 a.m. on the morning of the fight on May 4th. “We did this is my last fight, and I felt great. We followed the rules, and we still came into the fight at the weight we wanted to come in,” Jacobs said.

You’d like to think that Golden Boy Promotions would have budged by letting Jacobs still get the fight even if he rejected their terms when it came to the secondary weight check. Canelo has a lot of talent. He’s not someone that he needs to handicap his different foes still at this point in his career. It’s as if the mentality of Canelo’s promoters at Golden Boy is still stuck at the level they were at six years ago back when Canelo was involved continuous catch-weight fights. Instead dropping that idea and seeing it as an archaic thing from the past that wasn’t helpful, and completely unnecessary, the top brass at Golden Boy has continued to use weight rules as part of Canelo’s fights. Where it was completely laughable is when Golden Boy had a 164.4 lb catch-weight rule for Canelo’s fight against the painfully slow and way past his prime Julio Cesar Chavez Jr. in 2017. That weight rule actually hurt the fight, because Chavez Jr. was so drained from having made the 164 1/2 pound weigh-in limit that he could barely throw any punches. The boxing fans at ringside booed the non-action during the Canelo vs. Chavez Jr., and fans were still complaining about the dreadful match-up months later. Golden Boy doesn’t need to tinker with the weights in order to try and help their fighter Canelo. He’s either going to win his fights based on his talent or he’s going to lose. At some point, Canelo will lose, perhaps this Saturday, and there’s no tricks that Golden Boy can pull out of their hats in terms of inserting rehydration rules or catch-weights into the contracts for his fights. Every fighter loses if they stick around long enough and don’t dodge the talented fighters.

“The 10 lb rule isn’t the worst thing that they could have thrown at me,” Jacobs said. “It was expected, because when I fought Golovkin there was this thing, which was a lie, that I came into the ring a 180, 185 lbs., and that was the reason I was able to do so well. But if you know boxing, a fighter that gains 25 lbs in less than 24 hours can’t perform the way I performed, can move and be sharp the way that I was in the Golovkin fight. I’m here to kill that, to let the fans know that I follow the rules. I can come into a fight at a comfortable weight, and I don’t need any advantages. It’s just my skills,” Jacobs said.