GGG: ‘I want that fight’ against Canelo 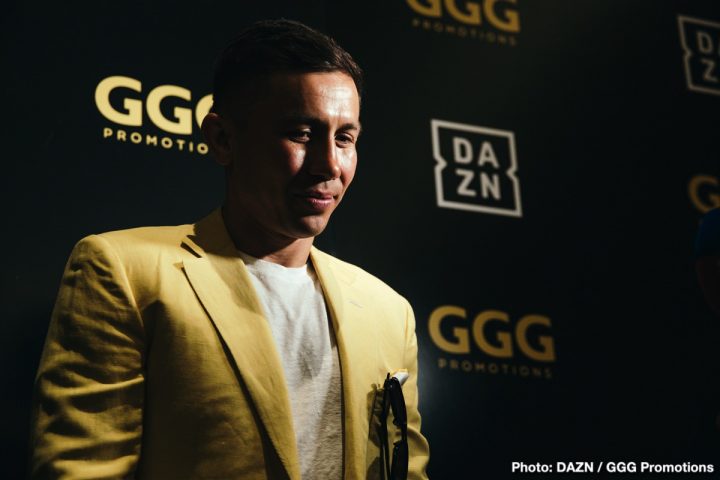 By Mark Eisner: Gennady Golovkin was in Las Vegas last Saturday night to make it clear to Saul Canelo Alvarez and his promoters at Golden Boy Promotions that he wants the third fight with the Mexican star in September. Canelo defeated IBF middleweight champion Daniel Jacobs by a 12 round unanimous decision in the headliner fight on DAZN at the T-Mobile Arena.

GGG didn’t like what he saw of Canelo and Jacobs, saying it was a boring, emotionless fight, similar to watching two fighters spar with one another. GGG wasn’t too far off with his assessment of the Canelo vs. Jacobs fight, as that’s what a lot of boxing fans thought of the dull 12 round fight. They expected fireworks, and what they saw instead was two guys not willing to go after each other to try and score a knockout to entertain the public.

Golovkin wants to avenge his loss that he suffered at the hands of Canelo last September at the T-Mobile Arena, and he figures that now he’s signed with DAZN, it should be a doable fight. Canelo basically ignored Golovkin after beating Jacobs.

At the post-fight press conference, Canelo mentioned wanting to unify the 160 and 168-pound weight classes. Golovkin might as well have been invisible to Canelo, which isn’t a good sign. When Canelo ignores fighters, it generally means he’s not interested in fighting them. Golovkin lashed out at Canelo after the fight by telling the DAZN commentators what he thought of the boring Canelo vs. Jacobs fight.

It still bugs Golovkin that Canelo beat him by a 12 round majority decision last September. Although GGG maintains that he’s not upset with the loss, it seems like he might be.

“Not at all. First of all, deep in my heart, I didn’t feel like I lost it,” GGG said about his defeat to Canelo. “Second, I enjoy my career, I enjoy my family, I enjoy my time and I’m sure there will be a third fight.”

Golovkin is at least correct in saying there will be a third fight with Canelo. It’s a given that Canelo will fight him again if for no other reason for the fact that he was just given a big $365 million contract with DAZN. They’re not paying him all that money just so that he can fight guys like Rocky Fielding, Jacobs, Demetrius Andrade and Callum Smith. Those are good fighters, but they’re not going to bring in the subscribers to DAZN the way that Golovkin will in a trilogy fight against Canelo.

Golovkin hurt his chances of getting a third fight with Canelo by signing for a June 8th comeback fight against little known fighter Steve Rolls (19-0, 10 KOs) at Madison Square Garden in New York. It was a blundering move by Golovkin, considering that he needed a high quality opponent in order to build interest from fans in seeing him and Canelo fight each other again. GGG needed a talented middleweight like Demetrius Andrade or Jermall Charlo for him to beat in order to create pressure on Golden Boy and Canelo to make the fight. Golovkin did the opposite, choosing a 35-year-old fringe contender with no experience against world class opposition.

Golovkin didn’t fight well in his rematch with Canelo. He looked like he was afraid to throw punches during the first six rounds. Although Golovkin did come on strong in the later rounds, he was too far behind to pull out the victory. Golovkin is 37-year-old now, and he hasn’t looked sharp in three out of his last four fights against Jacobs and Canelo. GGG might not have realized how he would be perceived by boxing fans when he signed to fight Rolls instead of an elite level fighter. Rolls is arguably an even worse opponent than Vanes Martirosyan, who GGG fought last year in May. At least Martirosyan is a fighter that came from an Olympic background, and had fought a number of top world class fighters during his career.

Rolls doesn’t come from a great amateur background, he’s old at 35, and he’s never fought a world class level fighter during his 10-year pro career. It’s difficult for one to wrap their teeth around an unbeaten fighter with 10 years of pro career that has NEVER fought an top 15 ranked fighter before. GGG and his management obviously feel that they’re still going to get the trilogy fight with Canelo no matter what. Golovkin will get that fight with Canelo or later, but by fighting Rolls instead of someone talented, Golovkin is giving Canelo an excuse to delay their fight for a year or two. Given his advanced age, Golovkin can’t afford to wait too much longer for him to fight Canelo again. It might not matter to Canelo that he won’t get credit from boxing fan if he waits until Golovkin’s 40-years-old before fighting him again.

Canelo is telling the boxing public that he’s fighting for his legacy by going after world champions to unify divisions. Since Golovkin didn’t heed Golden Boy Promotions’ CEO Oscar De La Hoya’s instructions for him to defeat Demetrius Andrade to win his WBO middleweight, it gives Canelo an excuse to ignore him and go after fighters that hold world titles. If Canelo decides he’s only going to fight GGG again if he wins another world title, then that’s going to put a lot of pressure on him if he faces Andrade to win the last helt in the middleweight division. Golovkin would then need to go up 168 to try and defeat one of the champions in that weight class so that he has bait to lure Canelo into fighting him. That means Golovkin would likely need to defeat IBF champion Caleb Plant, David Beanvidez [after he captures the WBC title from Anthony Dirrell or Billy Joe Saunders.