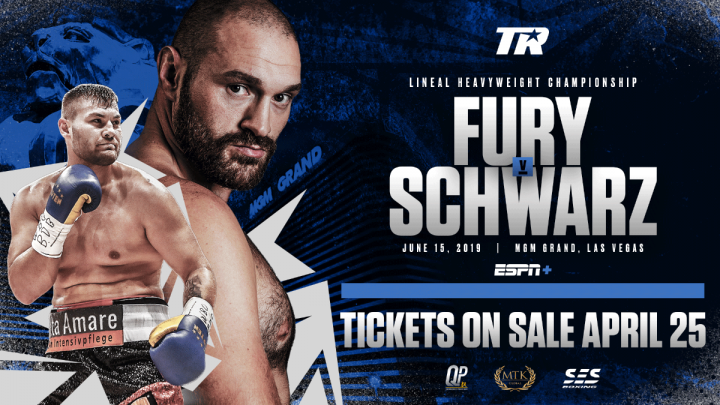 · A young, exciting undercard precedes Fury’s return to the US: an unmissable night of boxing for just £19.95

The iconic MGM Grand in Las Vegas will play host to Tyson Fury’s showdown with the up-and-coming Tom Schwarz on 15th June, as the Gypsy King steps into the ring for the first time since his thrilling split draw with Deontay Wilder in Los Angeles in December. Watch all the action from the fight, as well as a talented undercard that features some of boxing’s most exciting prospects, exclusively live on BT Sport Box Office.

The German is the current WBO Intercontinental Heavyweight champion, a title he has held since April 2017 when he knocked out Adnan Redzovic in the second round. More recently, he took down Croatian Kristijan Krstacic in March.

Exclusively live coverage will start on BT Sport Box Office from midnight with action from the undercard including Sonny Conto and Guido Vianello, the Italian Olympian.

Virgin TV customers should visit the On Demand section and choose Live Events.

Customers in the Republic of Ireland can purchase BT Sport Box Office with Eir Sport.

Anyone who wishes to watch the fight online should visit www.bt.com/sportboxoffice and follow instructions to subscribe and watch on the web or on the BT Sport Box Office app, and customers can watch on the big screen using Google Chromecast and Apple Airplay.

EE, Three and O2 customers watching online or via the App can choose to add the payment to their mobile bill