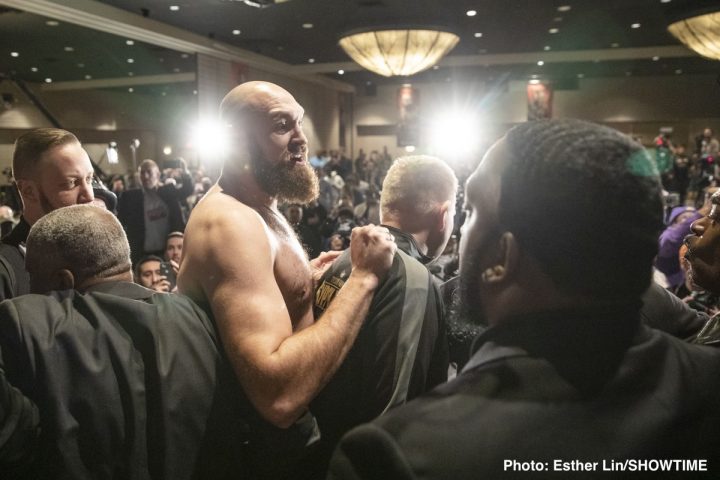 By Scott Gilfoid: Tyson Fury says he’ll be fighting a rematch against WBC heavyweight champion Deontay Wilder in December in what would be his third fight of 2019. Former IBF/WBA/WBO champion Fury (27-0-1, 19 KOs) quashed the rumors of him retiring after his third. He says that was a misunderstanding. He’s NOT retiring. Fury plans on continuing to fight for a long time.

Fury and promoter not on the same page?

It’s unlikely that Wilder (40-0-1, 39 KOs) and Fury will be fighting a rematch 2019 unfortunately. Fury’s promoter Bob Arum of Top Rank Boxing has said that a rematch between him and Wilder will be taking place in 2020. Moreover, Wilder’s next two opponents are his May 18th title defense against mandatory Dominic Breazeale (20-1, 18 KOs) are expected to be Adam Kownacki and Luis Ortiz. The rematch with Fury is being talked about in early 2020, but that that’ll depend on whether Top Rank wants to let the fight marinate more. They want to have Fury make a name for himself in the United States before they put him back in with Wilder for a second fight.

Top Rank has already set Fury up to face unbeaten #2 WBO German heavyweight Tom Schwarz (24-0, 16 KOs) on June 15 on ESPN at the MGM Grand in Las Vegas, Nevada. As such, what Fury says about him fighting Wilder in December has to be taken with a grain of salt as little more than empty blather from him to get boxing fans excited about the prospects of that match taking place down the road. In other words, Fury is name dropping. It’s an old tactic that fighters use to get fans excited about them.

”I think 2019. I think in December, we’re going to do the rematch,” Fury said to Behind The Gloves about his belief that a rematch between him and Wilder will take place in December. ”You’re going to see me kick his ass again. I’ve been back way over a year, and I’m strong at the weight. I don’t have to lose any weight. He had his biggest opportunity of his life to beat me, but he couldn’t do it,” Fury said about Wilder in discussing their previous fight last December. ”Never again will he have the opportunity of a Tyson Fury at 40% of what he should be at three years out of the ring, ten stone weight loss, and he STILL couldn’t beat me,” Fury said.

A lot of fans already think Fury was knocked out in the 12th round by Wilder last December. That was the match in which the referee Jack Reiss gave a count to Fury when was seemingly unconscious in the 12th round after Wilder dropped him with a tremendous right-left combination to the head. For some reason, Reiss didn’t stop the fight despite Fury looking like he was out cold. Most referees would stopped the fight on the spot. Reiss chose to go old school and give a count to the badly hurt looking Fury. Some boxing fans think Fury was given a long count. Never the less, Fury got back to his feet, looking extremely hurt, and the referee let the fight continue. It was surprising to see. There was two instances where the fight arguably could have been stopped, but the referee let it continue. The fight was scored a 12 round draw. Fury thinks he was robbed, but if you look at the knockdown sequence, it appears that Wilder is the one that got the short end of the stick with the fight not being stopped at that moment.

Will Fury’s punch resistance ever be the same?

There will be a great deal of attention on Fury’s next fight against the little known Tom Schwarz by fans, curious to see if Tyson’s punch resistance has been compromised from his 12th round knockdown at the hands of Wilder. Fury wasn’t just knocked down by Wilder. He was knocked out cold. One can ignore the referee letting Fury continue fighting after the knockdown. That was his call, but nevertheless, Fury was badly hurt and there’s a chance that his ability to take hard punches in his future fights will be comprised. That’s what some fans believe is the TRUE reason why Top Rank chose not to pull Fury out of his rematch with Wilder. They didn’t want to take chances of Fury being knocked cold by Wilder if he still has lingering effects from the 12th round knockdown by the devastating knockout artist “Bronze Bomber” last December. Top Rank could have put the 6’9″ Fury back in with Wilder while the interest was still high by the worldwide boxing public. What the American promotional company did instead was match him against a weak puncher with an arguably inflated resume in Tom Schwarz. The chances of Fury being hurt by the light shots from the 24-year-old Schwarz is virtually nonexistent.

”Even when he knocked me down in round nine, he still had two minutes to finish me, and couldn’t do it,” Fury said about Wilder in reminiscing about being dropped hard by Wilder in the ninth round last December. ”When he knocked me down, and knocked me out in round 12, he had over two minutes to finish me. So mentally, he’s a broken character, because he knows I took his best punches to come back and hurt him afterwards,” Fury said.

Well, there shouldn’t been any need for Wilder to finish Fury off after he knocked him down in the 12th round, should there? Fury was out cold. Normally, that’s game over when a fighter is out cold. You’ve got to give Fury massive credit for getting up from the knockdown by Wilder, but you can’t ignore the fact that he appeared to be unconscious after the knockdown.

”I didn’t say, ‘retired.’ I said three fights I will be gone for the year,” Fury said to Behind The Gloves in clarifying his earlier comments in another interview where he said he would be done after three fights. ”I’m just a young pup. I’m just getting started. This is my fourth defense of my lineal championship of the world. I’m really looking forward to it. Tom Schwarz brings some interesting challenges. He’s a big oaf, 6’5”, 6’6”, 255 pounds, ambitious, undefeated, good combinations, and a good fighter. What’s not to like? Good looking,” Fury said.

Fury is doing a good job of trying to build up Schwarz to try and make him sound like he’s a great fighter, and a threat to beating him. Unfortunately, that tactic doesn’t work. That’s the job of Top Rank to promote the Fury vs. Schwarz fight to make it seem like a credible match-up. The boxing public has formed their own opinion of Schwarz after seeing how poor he looked against Senad Gashi, and taking a glimpse of his weak resume.

Fury could hurt fan interest in a Wilder rematch

With Fury’s fight against the unheralded Schwarz, there will be a lot of eyes on him to see how well he does against the over-matched fighter. It doesn’t matter that Schwarz is ranked #2 with the World Boxing Organization, the fans see him largely as a mediocre fighter with little in the way of talent. If Fury doesn’t make easy work of Schwarz, he could hurt the interest in a rematch between him and Wilder. That’s why it’s always better for fighters to take on the best rather than looking for easy marks when fighting. Wilder is taking on one of the best in the heavyweight division for his title defense against mandatory challenger Dominic Breazeale on May 18. Unfortunately, Fury isn’t doing his part to make the rematch with Wilder a huge event by him taking arguably a soft opponent in Schwarz on June 15.

”Don’t underestimate Andy Ruiz Jr. He can fight. Do not judge him by his cover,” Fury said about the heavy set Ruiz Jr., who will be challenging IBF/WBA/WBO heavyweight champion Anthony Joshua on June 1 on DAZN and Sky Box Office at Madison Square Garden in New York.