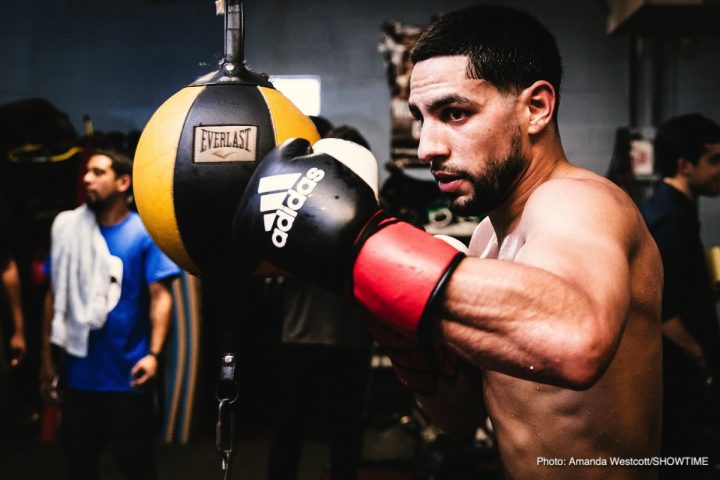 By Sean Jones: Former world champions Mikey Garcia (39-1, 30 KOs) and Danny “Swift” Garcia (35-2, 21 KOs) are in negotiations to fight each other in August at the Staples Center in Los Angeles, California.

The winner of the Danny Garcia vs. Mikey fight is expected to be face the winner of the July 20th fight between Manny Pacquiao and WBA Super World welterweight champion Keith ‘One Time’ Thurman, according to Lance Pugmire of the LA Times.

Danny and Mikey are in “advanced” talks for a fight possible for August 31 on Fox Sports PPV. Mikey didn’t do well against the unbeaten Spence (25-0, 21 KOs) in their fight on May 16 on on Fox Sports pay-per-view at AT&T Stadium in Arlington, Texas. There’s a huge difference between the talent that Spence possesses and that of Danny Garcia. Spence threw 1,000 punches against Mikey.

The decision by Mikey Garcia to stay at 147 to fight Danny Garcia is one of economics. There’s more money for him to make fighting at welterweight than the dough that he would get by moving back down to lightweight to fight the obscure fighters like Luke Campbell, Zaur Abdullaev and Devin Haney. Those are all good fighters, but none of them are household names. Besides the money Mikey will get by staying at 147, he doesn’t need to lose all the weight that he would if he moved back down to 135. With the huge payday that Mikey got recently against Spence, it would be a shock for him to move back down to lightweight to get a fraction of that in fights against the likes of Campbell, Vasiliy Lomachenko and Abdullaev. Moreover, there’s less for Mikey to lose in getting beaten by fighters much bigger than him like Danny Garcia than there would be if he were to get beaten by lightweights his own size. Since no one is expecting Mikey to beat the top welterweights, whatever he does that is a positive against them will be gravy. As long as Mikey is competitive, like he was against Spence, he comes out of the fights as a hero for fighting guys bigger and stronger than him. Mikey stands a much better chance against Danny than he did in the Spence fight.

Danny isn’t capable of throwing that many or even half that many. He’s not that kind of fighter. Danny is more of a slow, deliberate fighter, who looks to load up on his single left hook power shots. Spence attacks nonstop in the same manner that former IBF/WBA light welterweight champion Aaron “Hawk” Pryor (39-1, 35 KOs) used to attack his opponents during his great career. Mikey couldn’t deal with the nonstop punching style of Spence, and he went into survival mode almost immediately in order to keep from getting knocked. Mikey has a chance of beating Danny, because he’s slower, more methodical and is always looking to land his left hook. Danny is more of a one-dimensional fighter offensively than Spence, who looks to hit his opponents with a lot of different shots.

The 31-year-old Mikey has set a goal for himself to capture a fifth division world title. He’s already won world titles in four divisions previously at featherweight, super featherweight, lightweight and light welterweight. He tried to win a welterweight belt against Spence last March, but he was foiled by his size, power, boxing ability and work rate. Mikey has never been a high volume puncher, and Spence had the wrong style for him to beat without knocking him out. It wasn’t so much the lack of size and power that was Mikey’s undoing against Spence. It was more of a case him not being match the constant punches that he Spence was throwing in the fight. After the fight, Mikey made the decision to vacate his WBC lightweight title rather than go back down in weight. Mikey announced that he would be fighting at 140, but he’s not ready yet to move to that weight class. Mikey wants to keep trying to win a world title. There won’t be a world title on the line for the Mikey vs. Danny fight unless the WBC decides to put one of their special belts up for grabs. They have the WBC Diamond belt they can put on the line for the fight if they see the fight as being important enough.

Mikey will get a big confidence boost with a victory over Danny, and that’ll be enough for him to keep striving to win a world title in the welterweight division. Mikey will need to move quickly for another world title shot in the division, because Spence is in the process of winning his second world title at 147 when he faces WBC champion Shawn Porter in August. Once Spence has that belt, the only titles remaining for Mikey to go after will be the WBA straps held by Manny Pacquiao and Keith Thurman, and the WBO belt held by Terence Crawford. Pacquiao and Thurman will be fighting each other in July. The winner of that fight will be a tough obstacle for Mikey, as would Crawford if he wants to cross the pond to work with his old promoters at Top Rank to put that fight together.

The fans won’t be overjoyed at the prospects of forking over $70 to watch Mikey fight Danny Garcia on Fox Sports pay-per-view in August. These are certainly two good fighters, but the fact of the matter is both guys have been recently beaten. Danny as has fought nine times at welterweight since moving up to the weight class in 2014, but he lost to the only two good fighters he’s faced during those five years in defeats against Shawn Porter and Keith Thurman. The rest of the fighters Danny has fought at welterweight have been mediocre guys. These are the fighters Danny has beaten: Robert Guerrero, Rod Salka, Lamont Peterson, Paulie Malignaggi, Brandon Rios, Adrian Granados and Samuel Vargas. Those aren’t elite level fighters. With Mikey coming up short in his last fight against Spence, he’s asking a lot of boxing fans to pay another $70 to see him fight Danny. If Mikey had fought with more energy the way warriors have done in the past, his fan base might inclined to pay to see him fight Danny. The boxing public is going to likely be reluctant to purchase the Danny Garcia vs. Mikey Garcia fight, remembering what happen last time they paid to see Mikey fight against Spence. That performance wasn’t a fight where Mikey looked like he was willing to go out on his shield like warriors in the past. Instead, it looked like a guy that was trying to survive to fight another day. That’s fine if Mikey wants to fight like that, but he’s got to be ready to see his PPV numbers take a dive for this one against Danny. It’ll be surprising if Mikey’s fans are willing to pay to see him fight Danny in high numbers.