Crawford vs. Khan to re-air this Wednesday, May 22 on ESPN2 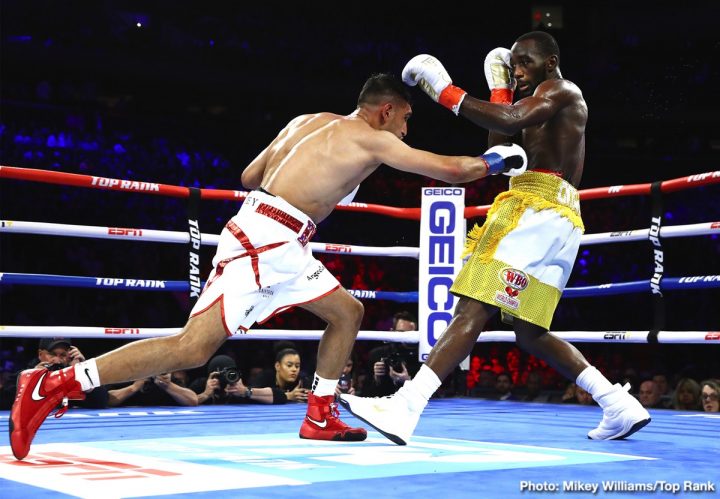 By Charles Brun: Fans can watch the re-air of the Terence Crawford vs. Amir Khan fight this Wednesday, May 22 on ESPN 2 starting at 9:00 p.m. ET. This is the fight that took place last month on on April 20 on ESPN pay-per-view. Crawford (35-0, 26 KOs) successfully defended his WBO welterweight title with a sixth round injury stoppage victory over former IBF/WBA light welterweight champion Khan (33-5, 20 KOs).

The Crawford-Khan fight was loaded with action from start to finish. Unfortunately, it ended on a sour note with Crawford throwing a left that strayed a little low under Khan’s belt-line in the sixth. Khan was hurt by the low blow, which he insists him below the belt. Moments later, Khan was asked by his trainer Virgil Hunter is he was still feeling the effects of the low blow. The interchange between them resulted in Hunter having the fight stopped. He wasn’t sure if Khan would be able to shake off the effects of the low shot. The referee David Fields then put a stop to the fight at 0:47 of round six.

Khan, 32, gave a good effort, and seemed to be fighting better in rounds five and six. Crawford look like he was on his way to winning the fight by a knockout when the match was stopped in the sixth round. Khan had been hurt in the first round by a counter shot from Crawford, and he never came back from that.

Khan not asking for rematch with Crawford

Khan hasn’t asked for a rematch with Crawford, and it’s unlikely that the two of them will face each other ever again. It’s a pity that the contest ended the way it did though, as it an expensive fight for boxing fans in watching it on ESPN PPV. The fans want to get value for their money, and the way the Crawford vs. Khan fight ended with the foul causing the match to be stopped, it’s disappointing. For a lot of the fans that paid for the Crawford-Khan card, they might not be so eager in the future to spend their money on pay-per-view events. What many of the fans have a problem with is they’re paying $4.99 per month to watch boxing on ESPN+, and they expect that to cover all fights, not just the lesser ones involving non-champions and non-stars. They don’t like the idea of having to pay the monthly charge of $4.99, and then still needing to pay to see pay-per-view boxing fans if one is advertised on ESPN that they feel appealing. A lot of the fans want the $4.99 to cover all fights. With DAZN, fans pay $20 per month or $100 per years, and they see all the fights.

Crawford is expected to face former IBF welterweight champion Kell Brook (38-2, 26 KOs) in his next fight later this year. Brook is considered an over-the-hill fighter in the eyes of a lot of boxing fans. If Top Rank picks Brook out as Crawford’s next opponent, the perception from some boxing fans will be that they’re making an elite pound-for-pound fighter against shot fighters and not talented A-level guys that fans want to see. If this is as good as it gets for Crawford in terms of the kinds of fights available to him during the prime of his career, it would be disappointing, but what can you do? All the talented welterweights are on the other side, managed by Premier Boxing Champions. What’s left over are guys like Brook.

There’s no word whether Crawford’s promoters at Top Rank will be making the fight for ESPN pay-per-view. It’s reasonable to assume that the Crawford vs. Brook fight will be shown on ESPN PPV. For Crawford to get the big paydays, his fights need to be on pay-per-view. Whether fans are willing to pay to see Crawford fight is debatable. Crawford’s last match against Khan is rumored to have done approximately 150,000 buys. If that’s an accurate number, it would be interesting to know if the event made or lost money. The undercard for the Crawford-Khan card was a mixed bag with the talented lightweight contender Teofimo Lopez destroying EBU champion Edis Tatli in five rounds, featherweight Shakure Stevenson defeating the recently beaten Christopher Diaz by a 10 round decision, Felix Verdejo topping Bryan Vasquez, and junior middleweight contender Carlos Adames stopping Frank Galarza.