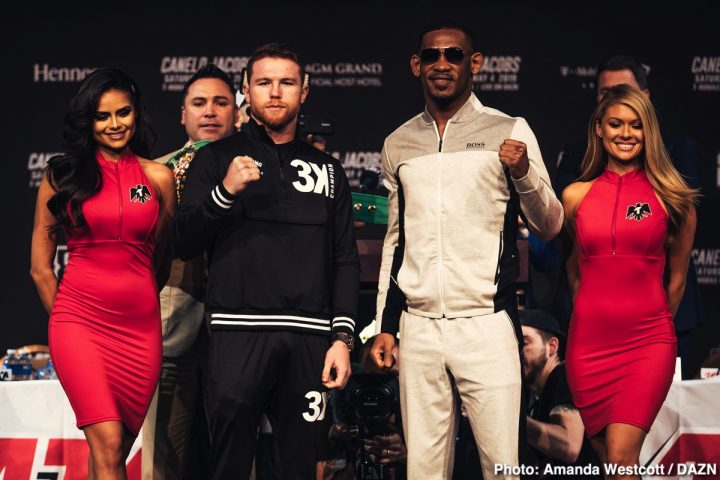 By Matthew Rosati: Canelo Alvarez faces off against Daniel Jacobs on May 4th, with three belts on the line at 160 pounds. This article will look at each fighter’s keys to victory, and why they need them to be victorious on Saturday.

Jacobs will need to maintain a strong pace for 12 rounds, specifically rounds 9 through 12, where I feel, there is an opening for Jacobs to make this fight his. I believe this because of how Canelo tends to look after a war of attrition through 9 rounds. From rounds 9 to 12 Canelo is usually looking for a second wind, we saw this in the Golovkin fights; it will be up to Jacobs to not allow Canelo to find that second wind. I would like to add that with the style and punch output that Canelo fights with, it is no surprise he fades in the later rounds.

The battle of the jabs is another area Jacobs needs to win, one of Canelo’s disadvantages is that he often gets out jabbed. To make things clear, Canelo’s style and boxing ability allows him the freedom to get out jabbed and still win fights because of his power punching, and counter punching prowess. That being said, Jacobs needs to stick, move, and control range using the jab. Most importantly, he cannot be afraid to let his hands go and make Canelo pay for closing distance; this was something GGG could have done more of in his fights with Canelo. Jacobs jab and movement has to multidimensional, this means he will need to go upstairs, downstairs, and use different exit strategies which may give Canelo issues, as we have seen in the past. With Canelo being accustomed to this type of game plan, he will make the necessary adjustments, from here, it is up to Jacobs to use the proper punch selection (especially power shots), to keep Canelo at bay. If Jacobs can’t do this, the fight will be Jacobs’ jab against Canelo’s power shots, a battle in which you will never have your hand raised. This is why it is crucial for Jacobs to jab, move, use his size and athleticism, but above all, not be afraid to throw power shots. Against Canelo, boxers seem to get lost in the thought that because they are out jabbing Canelo, they are controlling the fight. However, it is Canelo controlling the fight with the power shots to the body and the head, which are a decisive, eye-catching responses for the jab he is getting hit with.

Constant attack to the body

If Jacobs expects to win this fight we will most certainly have to fight fire with fire, meaning, whatever Canelo does, Jacobs needs to be ready to give it right back to him. This is especially the case for body shots, so often we see Canelo break down his opponents with a consistent body attack. Many fighters answer body shots with jabs and power shots to the head, neglecting the body, this was the case with GGG’s performance against Canelo. Jacobs needs to attack the body if he expects to win this fight, especially with the second wind Canelo looks for in the championship rounds, a steady body attack by Jacobs might make things more difficult for Canelo. Body shots are an investment, and if Jacobs wants to win this fight, a body attack is necessary.

Jacobs has some pretty quick hands and feet, attributes that I think people are overlooking in this matchup. Canelo matched well with Golovkin because GGG is not very quick, Canelo was able to time Golovkin quickly, and also had the quicker hands of the two. Speed is something we have seen Canelo struggle with in his career, think back to the Khan fight or the Lara fight, both fights he won, but fights where the speed and movement bothered Canelo at times. Jacobs having the quicker feet and hands against Canelo may make for an interesting night if Jacobs puts the right punches together, at the right times.

The overall goal for Jacobs is going to have to be using the intangibles, but not relying on them. Intangibles like size, speed, athleticism, and reach only last for so long against a class fighter such as Canelo. Meaning, Jacobs will have to use the intangibles on his side, but also be dynamic during this fight. What do I mean by dynamic? Jacobs needs to constantly show Canelo different looks, change levels, feint, make Canelo think he wants to keep things on the outside and then close distance, make it a fight, then make it a boxing match; in other words, the more looks the better. Canelo’s ability to process things quickly means Jacobs needs to use a lot of different skills to keep Canelo guessing. If Jacobs can do that, but more importantly, win the battle of the power shots, he can be victorious. If I had found 50 dollars on the ground and wanted to use it as a “throw away” bet, I would bet Jacobs by TKO, rounds 9 through 12.

Canelo is so great at using defensive skills to lure his opponents into throwing a shot, and in return, capitalizing with a couple of his own. Canelo is a very slippery and sharp fighter, I feel a key to victory for him will be to bait Jacobs into throwing shots and maintaining pressure on Jacobs while doing so. Canelo’s head movement while closing distance may cause Jacobs to misfire on his jab, and that is exactly what Canelo wants. Canelo is great at creating “micro panic” within his opponents. “Micro panic” in boxing is when your opponent puts you in a situation, where he knows that you know you have made a mistake, but instead of trying to capitalize on it, he uses this opportunity to neutralize that weapon and continues to put pressure in other areas. This allows Canelo to systematically neutralize his opponents weapons without really throwing any shots, Mayweather and Lomachenko stand out to me as other fighters who are similar in this regard. In other words, Canelo’s defense is a form of offense, in fact, the actual offense that plays off of his defense is where he finds the most success. Think of all of the counter body shots Canelo landed on GGG’s missed jabs and right crosses; all missed because of Canelo’s effective defense and pressure.

Canelo is going to have to fight this fight in the same fashion that he fought Golovkin in their rematch, he will need to throw a lot of power shots, especially to the body, to slow down the quicker, and bigger Jacobs. Canelo’s output is going to have to be very high if he expects to discourage a fighter like Jacobs. Canelo knows that Jacobs will be relying on his jab the same way Golovkin did in their rematch and therefore, closing distance, using head movement, throwing punches in bunches, to the body and head are simultaneous keys to victory; Canelo’s output will determine where this fights goes.

Don’t Stay On The Ropes:

As great as Canelo is fighting on the ropes, he can only do this against certain fighters, of a certain calibre. At middleweight, already being a smaller fighter, Canelo should keep the action in the middle of the ring. If Canelo attempts to take a breather or bait Jacobs into throwing shots while on the ropes, it is very likely that Jacobs will make him pay. One thing I like about Jacobs against Canelo, compared to GGG, is that Jacobs is far from hesitant, he is going to let his shots go regardless of the outcome. This is something that Golovkin, especially in the first fight, when Canelo’s back was against the ropes, did not do. This is why I feel Canelo having his back against the ropes with a fighter like Jacobs in front of him, who is bigger and quicker, but also hits very hard, isn’t the best approach. If Canelo keeps things in the middle of the ring, and forces Jacobs to backup or circle, he will have an easier time controlling the fight.

Make It A Fight Early:

Canelo being the smaller of the two will need to be the aggressor, and will need to be the one encouraging his opponent to trade punches. If Canelo makes this fight a war of attrition, the fight will play out how Canelo wants it to. If Canelo does not allow Jacobs to dictate the range of the fight and the output of punches thrown, then it could be a long night for Jacobs. Jacobs wants to be the one to decide when it becomes a fight or not, if Canelo takes that away from him, it can lead to success for Canelo.

Body Attack:
A key to victory for both men, but a key that is more characteristic for Canelo, is a body attack. Canelo will certainly need to slow down the more athletic Jacobs if he expects to create a wide margin of victory. If he can effectively break down Jacobs’ body, he can afford to have a higher output of punches throughout the fight, because if the body attack did it’s job, Jacobs won’t pose as much of a threat in the later rounds.

The overall goal for Canelo, is to be Canelo, there is a reason he is the favorite. If he can fight his fight and adjust quickly to Jacobs’ game plan, things should go in his favor.

Regardless of the outcome, I have no doubt that this fight will be absolutely amazing. Both men bring it at all times, and both men have mettle which match their skills. I think Jacobs has a legitimate chance to get a stoppage in the later rounds if he remains defensively responsible throughout the course of the fight. Obviously, if Jacobs takes a lot of damage early on, it will lower the chances of him rallying late. Stylistically, I feel Jacobs poses more of a threat to Canelo than GGG ever did. I think this because, as mentioned earlier, he has both the intangibles and boxing ability to give Canelo problems. As for Canelo, who is the favorite in the matchup, if he shows up in the same form as the GGG rematch, he is a very hard man to beat. People make a big deal about how Canelo is impossible to beat by decision and often overlook his actual boxing ability, because it is easier to blame external reasons, than to really sit back and deduce why he won. Canelo is not impossible to beat by decision because he “pays off judges”, he is hard to beat by decision because he always lands the harder, more damaging blows while getting his head snapped back with jabs; this is difficult for casual fans to understand. To the untrained eye, ten jabs will favor five power shots. In reality, this is a hurt sport, if your opponent is landing three times as many jabs as you, but your opponent is hitting you with twice as many power shots, the professional boxing judge will rate the power shots more highly, and for good reason. Moral of the story, if Jacobs plans to beat Canelo by decision he must do two things. Firstly, Jacobs needs to accomplish the more simple task of out jabbing Canelo; secondly, Jacobs must accomplish what few fighters can’t against Canelo, and that is, land the more eye-catching power shots.


« Gaibnazarov vs. Fox Featured on Berchelt vs Vargas 2 Undercard