Breazeale: ‘Deontay Wilder won’t want to fight again after I beat him’ 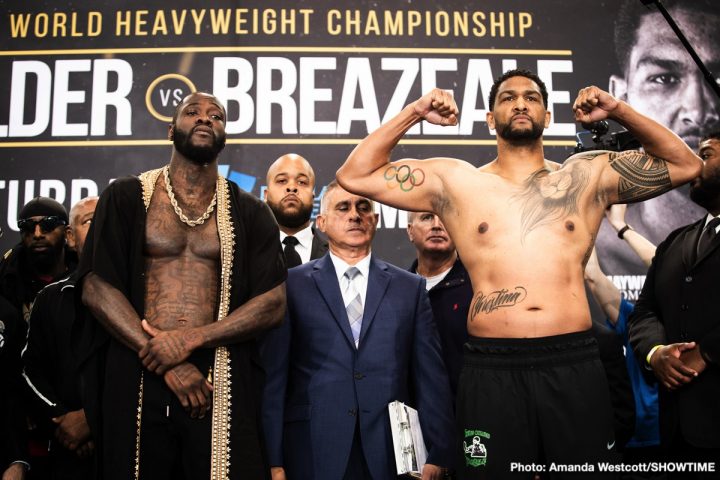 Breazeale believes that he’s going to mentally ruin Wilder by beating him. Breazeale wants to go out and school Wilder for as long as the match lasts. Wilder’s last opponent Tyson Fury had a lot of success against him until he caught up with him and dropped him twice in the second half of the fight. Fury made it out of the fight on his feet, and earned a 12 round draw.

It wasn’t a good enough performance by Fury to get the win. Breazeale will need to be more offensive-minded than Fury if he wants to get the victory. It’s not enough to tell the fans afterwards that he won the fight the way that Fury did. Breazeale actually has to win it if he wants to capture the WBC title, and then move on to face IBF/WBA/WBO champion Anthony Joshua in a unification.

”Wilder doesn’t know what he’s getting himself into. He’s in for a fight. He better be confident in his abilities, because Saturday night, he’s going to be in the toughest fight of his life,” Breazeale said at the final news conference on Thursday.

It would be surprising if this is the toughest fight of Wilder’s life against Breazeale. If it is, then it’s a signal that Wilder is starting to lose it as a fighter, because Breazeale has never shown himself to be great fighter. He struggled to beat Eric Molina, Amir Mansour, Fred Kassi and Izuagbe Ugonoh. Breazeale has fought just three times since his seventh round knockout loss to Joshua in 2016.

Breazeale has mostly been waiting for his mandatory title shot after his win over Molina in December 2017. That’s the reason the World Boxing Council has Whyte ranked above Breazeale. Whyte stayed busy last year, fighting three times to move passed Breazeale in the WBC’s rankings. Breazeale fought just once in beating Carlos Negron last year in December.

“I’m going to beat Deontay so bad that he’s not going to ever want to lace up the gloves again,” Breazeale said.

It sounds like Breazeale is going to be coming to slug it out on Saturday night. That’s good news for the fans, but it might not workout well for him if Wilder clips him with one of his right hands. Since it’s unlikely that Breazeale will be able to win the fight by boxing Wilder from the outside, his best chance of beating him is by getting into an all out war, taking his best shots, and hitting him back until he’s wobbling.