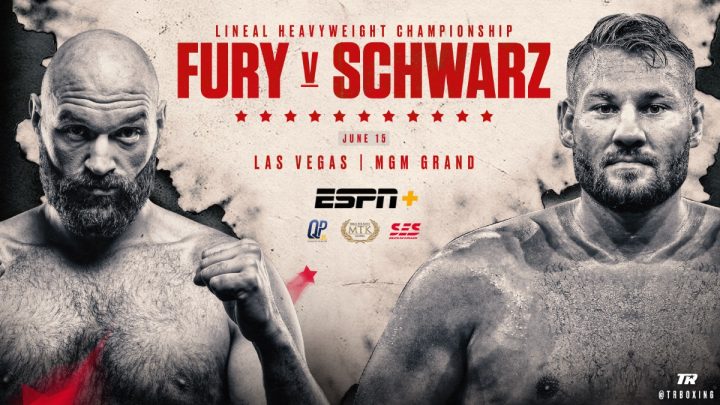 By Scott Gilfoid: Lineal heavyweight champion Tyson Fury will be defending against Tom Schwarz on June 15 in the main event on ESPN+ at the MGM Grand in Las Vegas, Nevada. This is the first fight for the “Gypsy King” with his new co-promoters at Top Rank Boxing, and they’ll be a lot of watchful eyes from fans to see if they’ve struck gold in signing the unbeaten former unified champion. Top Rank promoter Bob Arum believes Fury is the best heavyweight in the division.

The fight card kicks off at 10:00 p.m. ET/7:00 p.m. PT. This should be an interesting fight from start to finish. Neither guy can punch, and both aren’t afraid to throw leather.

These are two BIG heavyweights that’ll be squaring off in this fight in hopes of moving on to bigger, better things in the near future. This will be one of the rare fights in the 6’5″ Schwarz’s career in which he’s not the bigger fighter. Fury, 6’9″ will be enjoying a four inch height advantage over the German fighter.

We can only hope that Fury let’s his hands go in this fight. Fury, 30, fought defensively in his two biggest fights of his career against Deontay Wilder and Wladimir Klitschko, but he’s expected to be more aggressive when he defends his lineal title against the German heavyweight Schwarz. Fury doesn’t need to worry about the punching power of Schwarz like he did against the hard hitting knockout artist Wilder (40-0-1, 39 KOs) in their fight on December 1. Schwarz is more finesse type of fighter, who stops his opponents by hitting them with an accumulation of punches.

This will be Fury’s third appearance in the U.S. He fought Wilder to a 12 round draw at the Staples Center in Los Angeles, California. Six years ago, Fury defeated Steve Cunningham by a seventh round knockout in April 2013 in a fight that saw both fighters hit the deck hard. Fury was lucky to get out of the Cunningham fight without getting knocked out. It was a strange fight to watch. Cunningham gassed out after hitting Fury with a single shot to the head that dropped him in the second round. After that knockdown, Cunning ham looked incredible tired, as if the effort into throwing a single hard shot to the chin of Fury had taken everything out of him. It was fortunate for Fury that Cunningham in such poor shape that he couldn’t follow up with anything in that round or the following rounds, because he was there to be knocked out on the night.

This isn’t the fight the fans wanted to see

This could have been Wilder vs. Fury II facing each other, but Top Rank, the new promoters for Fury, wanted to let the rematch marinate for a while. It’s unclear Top Rank expects to gain from the second fight being delayed until early 2020. To gain more popularity for Fury, Top Rank would need to match him tough against a dangerous heavyweight that the U.S boxing fans had hear of before. Schwarz is an unknown with the American fans, so this is kind of a waste of tie and effort. Luis “King Kong” Ortiz or Adam Kownacki would have been better choices for Fury to fight on June 15 rather than Schwarz. However, Kownacki and Ortiz can punch, and it might end badly for Fury if he were to face someone like that.

It’s believed by some boxing fans that Top Rank chose Schwarz because he’s not a big puncher, and there’s some concern whether Fury’s punch resistance might have taken a hit with the bad knockdown he suffered in the 12th round in his last fight against WBC heavyweight champion Deontay “Bronze Bomber” Wilder on December. Fury was dropped like a bad habit by Wilder in the twelfth round, and looked to be fast asleep as he laid on the canvas for what appeared to be five seconds without stirring. Both of Fury’s eyes were closed, and he looked in a bad way. The referee Jack Reiss went old school and gave a count instead of stopping the fight after seeing Fury’s condition. Fury eventually opened his eyes, and slowly dragged himself off the canvas, and was able to resume fighting more or less for the remainder of the round. With a knockdown like that, there are some fans that believe that Fury might be vulnerable to getting knocked out in his next fight. Hence, Top Rank chose not to match Fury against Wilder in an immediate rematch, and instead found a light puncher in Schwarz for him to fight on June 15.

“Tyson will be facing a tough, experienced and undefeated fighter in Tom Schwarz, who is coming to Las Vegas ready to shock the world,” said Top Rank head honcho Bob Arum.

Arum is embellishing Schwarz’s credentials a tad bit in calling him “experienced” and “tough.” The fact of the matter is, Schwarz is NOT experienced at all in any way, shape or form as a pro. I mean, we’re talking about a heavyweight here whose best win is sixth round disqualification victory against Senad Gashi last year in April. Schwarz flopped after being head-butted by Gashi in the sixth round, and the referee then immediately stopped the fight and gave Schwarz the victory. The fight took place in Neukoelln, Germany. Schwarz’s other notable wins were against these fighters: Konstantin Airich, Ivica Bacurin, Vaclav Pejsar, Jakov Gospic, and Tomas Mrazek. Those are journeyman fighters. As such, you can’t really call Schwarz is experienced if all he’s fought is fodder his entire career. Schwarz hasn’t fought anyone good enough for you to determine whether he’s “tough” like Arum says he is. He sure didn’t look that way when he dropped to the canvas after being head-butted by Gashi last year. That looked comical. It’s going to be interesting to see what theatrics we’re going to see with Fury and Schwarz. It wouldn’t be surprising to see Schwarz hit the deck if Fury hits him with a shot low or to the back of the head. Hopefully this fight doesn’t end with a disqualification like the Schwartz-Gashi fight.

Top Rank signed Fury to a three-fight deal earlier this year. From a logical point of view, for the deal to make sense, Fury’s next two fights after the Schwarz contest will likely be against Wilder and then IBF/WBA/WBO champion Anthony Joshua. You never know with Top Rank. They might have some other idea with Fury. They can match him up against guys like Kubrat Pulev, Bryant Jennings and Oscar Rivas. Those aren’t big punchers. So as long as Fury can stay upright for the full 12 rounds against those guys, he has an excellent chance of beating him. It’s possible that Top Rank can turn Fury into a star in the U.S without putting him in with a risky opponent like Wilder of Joshua.

“I’m absolutely delighted to be boxing in Las Vegas on ESPN+,” Fury said. “I always said I will never go to Vegas until I box there and now I finally am. I can’t wait to put on a boxing master class for all my fans. The British and Irish fans will invade Vegas. I can’t wait!”

Some boxing fans are annoyed how Fury has shown no interest in fighting Wilder in a rematch. Fury says the boxing public knows who won that fight, so he can’t be bothered fighting Wilder again. It looks to some like Wilder’s devastating knockdown of Fury put him off, making him not want to tangle with the hard hitting Alabama knockout artist. Going in the safe direction of a fight with Schwarz will have Fury calm waters where he won’t have to risk getting knocked out again.

It’s hard to say what the end game is with Top Rank when it comes to Fury. They’re giving him a mess of money to fight in the U.S. Surely, they would want to cash out with a couple of good fights for him against Joshua and Deontay, right? Maybe not. Look at how Terence Crawford has been matched by Top Rank. He’s been taking soft opponents for the last 10 years, and he still has yet to face his first real threat. If Top Rank does that with Fury, he could stay unbeaten into his 40s. It won’t be the end of the world if Fury loses to Deontay, Joshua, Pulev or Dillian Whyte. As long as Fury puts in a good effort like he did in his recent draw against Wilder, the boxing public won’t turn their backs on him if he gets beaten by some or all of those fighters.