Tim Bradley: Spence only showed one gear against Mikey 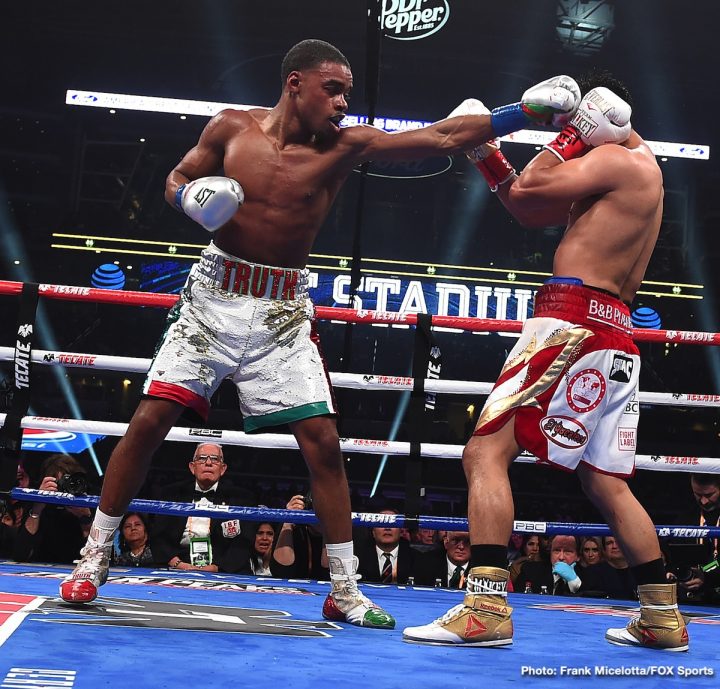 Jim Dower: ESPN commentator and former two division world champion Tim Bradley says Errol Spence Jr. showed that he couldn’t get out of first gear in his recent win over Mikey Garcia on March 16 at AT&T Stadium in Arlington, Texas.

Bradley doesn’t know what the situation was for the unbeaten IBF welterweight champion Spence (25-0, 21 KOs) with him lacking the snap on his shots, and not hitting a smaller fighter than himself with enough force to knock him out. Bradley thinks that Spence, 29, might have over-trained for the fight or punched himself out after throwing 1,083 punches in winning by the scores 120-107, 120-108 and 120-108.

“He only had one gear,” Bradley said to AB Boxing News about Spence. “Maybe it was because he threw a lot of punches, and kind of got arm weary or whatever, but he didn’t have that next thump like pop-pop, you know what I mean, that I’m used to see him doing in loading up with shots like he normally does, especially when you got a guy that small. It was an impressive win by Spence. I respect him more now. The fact that he beat Mikey Garcia, he moved up major in my pound-for-pound list. Mikey asked for this. he beat a top fighter pound-for-pound,” Bradley said.

If Spence hopes to beat the elite fighters his own size at welterweight, then he’s going to need to find another gear in his game to fight harder and throw with more punching power to compete with them. Bradley’s observations about Spence showing only one gear to his offense was echoed by a lot of boxing fans in watching him against Garcia on March 16. Spence fought like someone that was afraid to exert himself in a major way for fear of gassing out. In watching the fight, it looked like Spence could have taken Mikey out in every round of the fight if he’d switched into another gear. In the ninth round, Spence finally opened up on Mikey in throwing a lot of power shots with mean intentions on them, and he had him close to being stopped. Spence failed to attack Mikey in the same way after the ninth round, which makes you wonder if he emptied his gas tank from throwing a lot of shots in that round.

When Spence gets in there with the talented welterweights like Crawford, Keith Thurman, Manny Pacquiao, Shawn Porter and Danny Garcia, he’s going to need to be able to fight hard for a full 12 rounds, and not just for one round. This isn’t something new for Spence. He did the same thing in his fight against Lamont Peterson last year. Spence fought like he was stuck in first gear in rounds one through four, and six and seven. The only round where Spence appeared to go all out was in the fifth when he had Peterson reeling. In that round, Spence was attacking Peterson in the same way he did with Mikey Garcia.

“It was a cool performance. When he went 12 rounds, I saw him [Spence] get a little gassed, because he threw a ton of punches, over 1,000 punches. That’s unreal,” Bradley said to AB Boxing News about Spence throwing 1000 shots in the Garcia fight. “I didn’t think he had that in him to throw that many punches. He was in one gear, I saw. Maybe he was in one gear because he was over-trained. I couldn’t see the real snap on his punches. It was more placement type punches, but what I did see was him maintaining his distance. It was phenomenal. He moved his head and got out of the way in spots,” Bradley said.

The question is did Spence take it easy on Mikey in hopes of letting the fight be close enough for there to be a demand for a rematch? That’s what some boxing fans think Spence did. Spence threw a lot of punches, but he couldn’t hurt Mikey with anything. Even in the ninth round, which was by far the best round of the fight for Spence. Did Errol take it easy on Mikey?

“He made Garcia look just foolish,” Bradley said. “It was horrible. I think there’s a possibility that Garcia could be done. Thank about it. His brother [Robert Garcia] was 29 after he suffered a loss. Mikey Garcia has done a lot in the sport. He hasn’t had that big signature win, but he’s won four world championships, which is good. He got a big paycheck, a huge paycheck. When you get a huge paycheck, when was the last time you saw Conor McGregor get back in there? $100 million dollars, it took him a minute to get back in there to fight for a couple of million. It took him a minute to negotiate that. He was trying to accomplish success, but it was a horrible performance. What kind of fighters are going to get him up after that?” Bradley said.

Garcia, 31, didn’t get hurt by Spence at any time in the fight. Although Mikey did take a lot of punishment in the fight, it wasn’t the to an extreme level. Mikey was partially deflecting the shots most of the fight, and it was only occasionally where he would get hit with one of Spence’s placement punches. Bradley saw it correctly. Spence wasn’t hitting Mikey with anything he couldn’t handle in the fight for some reason. Spence might have been afraid to gas out or he could have been over-trained and weight-drained partially. Whatever the case, Spence’s shots didn’t bother Mikey enough for it to potentially hurt his career and make him a shot fighter.

“Spence don’t need my advice. Spence is a master of distance,” Bradley said. “I don’t know what he learned sparring Floyd Mayweather. He is great. Mikey Garcia couldn’t even land a punch on him. Mikey Garcia is a world class fighter, a top 10, a smaller guy, I get that. He should have been able to land something on Spence, but he couldn’t. If he did, it as one punch at a time. It was no follow up. He couldn’t even get close to Spence in order to throw, and that is Mikey Garcia we’re talking about. The speed wasn’t there, the punching power. Spence wasn’t effected by it at all. Spence did exactly what he wanted to do, and had to do. Keep his height, use the outside, use the jab, and work the body. The body work was phenomenal in this fight. He almost got him out of there. He threw 1,000 punches. Sometimes you can’t everybody out. It was Mikey Garcia we were talking about, a guy with tremendous heart, a guy that was trying, but wasn’t good enough. There’s weight classes for a reason. I gave Mikey Garcia way too much credit. I thought Mikey Garcia had enough skills to find some holes in Spence’s defense. Spence showed, ‘I do have good defense. I do have good footwork.’ I saw that he moved to the side, and slip shots from Garcia,” Bradley said.

Spence had the advantages in height, weight, reach, power and youth. Everything was on his side in the fight. Garcia showed a lot of heart and ability in going the full 12 rounds without getting knocked out. You’ve got got to give credit to Mikey for being able to handle Garcia’s power.