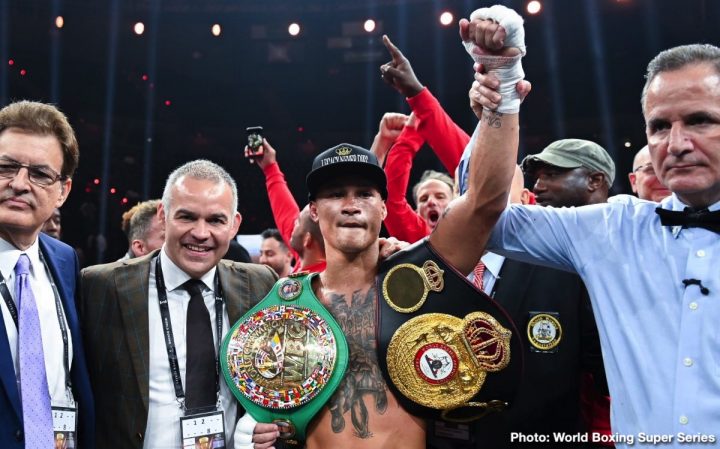 Prograis says he prefers that his opponent be Josh Taylor (14-0, 12 KOs) in the final of the WBSS. Taylor still needs to win his semifinal fight against IBF light welterweight champion Ivan Baranchyk on May 18 to book his ticket to the final of the tourney to meet up with Prograis.

At the time the fight was stopped in the sixth round, Prograis, 30, was ahead on the scorecards by the scores 50-44, 48-44 and 50-44. Boxing News 24 had Prograis up 50-44 in this one-sided fight. Prograis knocked Relikh down in the 1st round, and continued to punish him badly with hard shots until his corner threw in the towel in the sixth.

“I told y’all I’m the real deal. No one at 140 can f— with me,” Prograis said after his 6th round stoppage win over Kiryl Relikh in Lafayette, Louisiana. “I am the best, and I’m going to keep proving it. That dude [Relikh] is a tough ass dude. He never been stopped. He barely never lost, and I dominated the whole time and stopped him. They can’t mess with me. No, I’m not surprised. I knew what I was going to come in here and do. I’m just a different animal, brother. We been a different animal from get go. It’s been like that, and I’m saying whoever they put in front of me, they’re going to get the same treatment. It’s the same thing as the last fight,” Prograis said after his win over Relikh.

Prograis out-boxed his quarterfinal opponent former WBO lightweight champion Terry Flanagan in beating him by a 12 round unanimous decision last October in New Orleans. The way that Prograis fought Flanagan was different than the way he fought Relikh. Prograis was mostly boxing Flanagan, and not looking like he wanted to take him out. The only round where Prograis stepped on the gas against Flanagan was in the 8th round. Prograis dropped Flanagan in that round, and had him looking like he was ready to be knocked out.

“I worked on my defense. People love saying that I’m just, ‘a knockout puncher,’ and I can’t go 12 rounds, and that I get hit too much. Guess what? My last fight, I proved I can go 12 rounds, and I didn’t get hit,” Prograis said. “This fight, I barely got hit, and I stopped him. So what else can they say about me? Nothing! It don’t matter. It really don’t matter. I’d rather fight Josh Taylor. I want to fight Josh Taylor, man, just because some people say he can beat me.” Prograis said when asked who he wants to fight next in the final of the World Boxing Super Series tournament, Ivan Baranchyk or Josh Taylor? “Baranchyk or Josh Taylor, both of them. It’ll be a hell of a final,” Prograis said.

If Prograis beats Taylor or Baranchyk with the same ease as he did Relikh last Saturday night, that would be a big accomplishment. Both of those fighters are solid guys with excellent technical boxing skills, size and power. Prograis beating either of them in the same effortless way that he did against Relikh, it would be a big feather in his cap. But at the same time, it would show that he needs to move on to bigger and better things with his career rather than limiting himself against less talented fighters than himself.

For the boxing fans that were saying that the 2012 Olympian Taylor, 28, would beat Prograis, a lot of them have changed their mind after seeing last night’s win by the New Orleans native. The #1 WBSS tournament seed Prograis is looking unstoppable right now at 140. He’s not only looking like the best fighter in the WBSS tournament, but also in the entire light welterweight division. There’s no one in the division that can give Prograis a good fight now that former unified 140 lb champion Terence Crawford has moved up in weight. Prograis might need to move up to 147 after the tournament is over to look for bigger fights. There’s no point in Prograis exhausting his career trying to have his management setup unification fights against the likes of WBC champion Jose Ramirez and WBO Maurice Hooker.

“I feel like they’ve got to put me in there right now,” Prograis said about Ring Magazine’s pound-for-pound rankings. “I’m running through everybody. This is my 24th fight, and I haven’t had a hard fight yet. I ran through everybody. Everybody, I ran through them. So how can you not put me in pound-for-pound? That was a world champion,” Prograis said about his win over Relikh. “My last fight [former WBO lightweight champion Terry Flanagan] was a former world champion. Julius Indongo was a former world champion. Other dudes aren’t fighting them. If you look at Maurice Hooker, Jose Ramirez, who are they fighting? They ain’t fighting who I’m fighting. So, of course, put me in pound-for-pound,” Prograis said.

It’s going to take more time for Prograis to get rated in the pound-for-pound list. Crawford got the distinction by unifying the 140 lb weight class with wins over Thomas Dulorme, Viktor Postol and Julius Indongo. Some boxing fans have an issue with Crawford being put at #2 in Ring Magazine’s pound-for-pound list, because he didn’t beat a formidable champion to get that distinction. Indongo was an easy mark for Prograis. Prograis knocked out Indongo in two rounds last year in March in doing a better job of stopping him than Crawford did. The whole pound-for-pound thing is kind of overrated. A lot of the guys in the top 10 are fighters that haven’t been tested, including Crawford. If Prograis keeps winning, he’ll get his top 10 ranking in the pound-for-pound list. But to get to the #1 spot, it’s going to require that Prograis move to 147 and start beating more talented opposition like Keith Thurman, Errol Spence Jr., Crawford, Shawn Porter, Manny Pacquiao and Danny Garcia. Prograis is 30-years-old now. He can’t afford to burn through another one to two years trying to unify the light welterweight division. The bigger money fights are at 147 for Prograis.