Lomachenko vs. Crolla this Friday on ESPN+ 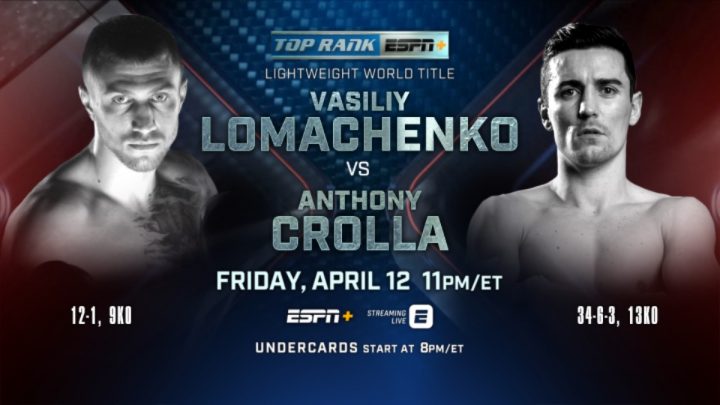 By Mark Eisner: The fans are going to see what WBA/WBO lightweight champion Vasiliy Lomachenko (12-1, 9 KOs) is made of this Friday night on April 12 when he defends against former WBA champion Anthony Crolla (34-6-3, 13 KOs) on ESPN+ at the Staples Center in Los Angeles, California.

This might have been an easy fight for Lomachenko a couple of years ago, but he’s starting to show signs of wear and tear from age, and the accumulation of his 400 amateur fights and 13 pro fights against tough opposition. Lomachenko hasn’t been taking it easy since he turned pro six years ago in 2013. The last two fights Lomachenko, 30, has had against Jorge Linares and Jose Pedraza show pretty clearly that he’s starting to wear down as a fighter. Lomachenko wants to unify the lightweight division, and then he’s expected to move back down to super featherweight where his lack of size and punching power isn’t as much of a handicap as it is at 135. But before he moves down in weight, Lomachenko has to beat Crolla, Teofimo Lopez and possibly Richard Commey. Lopez is going to be a real problem for Lomachenko, because he’s got the size, youth and punching power to beat him.

Purchase your tickets to see the action in-person: https://t.co/JwQcnDitR1 pic.twitter.com/wxtE3GHKPp

What makes it difficult for the boxing public to give Crolla a shot at winning this fight is the fact that he was beaten twice by Jorge Linares in the past in losses in 2016 and 2017. Those were close fights that were tactical battles. Crolla wasn’t able to use his best weapons in that fight due to the movement that Linares used against him to keep him from fighting on the inside. Lomachenko beat Linares by a 10th round stoppage last May in a fight that proved to be a costly one for the two-time Olympic gold medalist from Ukraine with him suffering a shoulder injury that required surgery afterwards. Lomachenko hasn’t looked the same since his surgery. In Loma’s recent fight against Pedraza last December, he appeared to be babying his right hand, and not using it the way e had in the past. That’s a red flag that the shoulder isn’t fully back for Lomachenko. That’s not surprising though, because a lot of fighters struggle when they come back from shoulder surgery, and they’re often not the same fighter they once were. Lomachenko is going to need two good arms for him to beat Crolla on Friday night. He’s too talented for him to be beaten by a one-armed fighter.

The fans think Crolla, 32, is going to get thrashed by Lomachenko, but that may not be the case. Lomachenko looked pretty beaten up at the end of his last fight against Pedraza last December in winning a 12 round unanimous decision at Madison Square Garden in New York. Crolla is at least as tough if not tougher than Pedraza. He’s a better body puncher than Pedraza and Linares. If Crolla can get to the body of Lomachenko, he could spoil the party and show that Loma isn’t the next Muhammad Ali like Bob Arum of Top Rank has been talking about. Ali had a lot longer prime than Lomachenko has had, and Ali missed four years due to him being denied a boxing by the state from 1967 to October 1970 after refusing to be inducted into the armed forces. Lomachenko is a good fighter, but he’s got a long ways to go to prove himself. Crolla could be the one that brings Lomacheno back down to earth on Friday night. That would be a shock if Crolla won this fight, but that’s what happens when a fighter gets worn down from too many hard fights.

Boxing » Vasyl Lomachenko » Lomachenko vs. Crolla this Friday on ESPN+