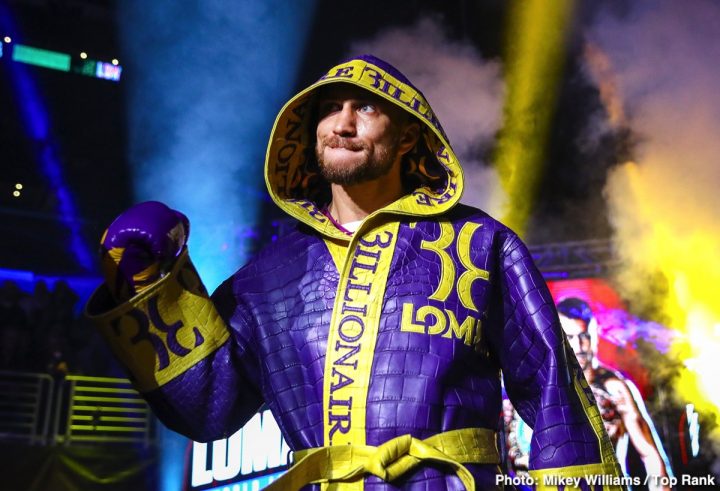 By Chris Williams: Vasiliy Lomachenko suffered a right hand injury his fourth round knockout win over former WBA lightweight champion Anthony Crolla last Friday night at the Staples Center in Los Angeles, California. Lomachenko’s manager Eglis Klimas says it was a dislocated right knuckle, and he doesn’t believe the injury will delay Lomachenko (13-1, 10 KOs) from returning to the ring in September for his next fight.

It’s thought that the injury Lomachenko suffered came in the fourth round when he landed a hard fight hand to the head o the 32-year-old British fighter Crolla (34-7-3, 13 KOs) that sent him down on the canvas.

With the injury to Lomachenko, it might be a good idea for Top Rank to scale back their goal of having the talented Ukrainian take on WBC lightweight champion Mikey Garcia or IBF champ Richard Commey for his next fight. Those are the type of fighters that Lomachenko will need two healthy hands to beat. He’s not going to defeat them if he’s fighting with one good hand, and a right hand that is less than 100%. Lomachenko isn’t a puncher anyway, but if you take away what little power he has and throw him in the ring with the likes of Mikey or Commey, it could end badly for him.

It wasn’t surprising that the 31-year-old WBA/WBA lightweight champion Lomachenko suffered the injury, as he was loading up on everything he threw at Crolla, which is unusual for the two-time Olympic gold medalist from Ukraine. Lomachenko normally throws mostly pitter-patter shots that force his opponents to quick due to the sheer number of punches he throws. Last Friday night, Lomachenko broke from that tradition by sitting down on his shots from the opening bell. For a fighter not accustomed to punching with full power, Lomachenko suffered the injury to one of the knuckles on his right hand. The good news for Lomachenko and his boxing fans is he won’t need surgery to repair his injured knuckle. But like all injuries, one won’t know how well Lomachenko’s injured knuckle will heal until time passes. If the injury needs more time to heal, then Lomachenko won’t be able to return in September.

“His knuckle, it’s just dislocated, no surgery needed,” Klimas said to ESPN.com “They just put it back in place, three weeks in a cast and he’ll be good to go.”

An MRI was done on Lomachenko’s hand in a hospital in Los Angeles, California. That’s when the hand injury was discovered,

Lomachenko just recently came back from right shoulder surgery following his 10th round knockout win over Jorge Linares last year. Lomachenk looked like he was favoring his right shoulder in his last fight against Jose Pedraza last December. Lomachenko won the fight, but he was forced to go the full 12 rounds, and his face was badly marked up by a fighter that was blown out in seven rounds by the much younger Gervonta “Tank” Davis in 2016.

Davis was only 22-years-old at the time that he fought Pedraza, but he still made it look easy. Lomachenko is seemingly obsessed with winning all the belts at lightweight, despite the time commitment that’ll it’ll require for him to accomplish that task. Further, if and when Lomachenko does eventually unify the 135 lb division, the boxing public likely won’t care too much, as this is a personal goal of his. The fans aren’t chomping at the bit desiring that Lomachenko win all four titles at lightweight by beating little known Commey, and likely Luke Campbell, if Mikey Garcia vacates his World Boxing Council 135 lb title.

The fans want to see Lomachenko, or any fighter for that matter, take on the biggest names possible. Lomachenko is veering away from what the U.S boxing fans want, and focusing more on his own goal of unifying the division. This is the same thing we saw with Top Rank fighter Terence Crawford. Instead of him insisting that Top Rank put him in with the biggest names possible, he wasted time unifying the light welterweight division by fighting Julius Indongo, Thomas Dulorme and Viktor Postol. In hindsight, Crawford would have been better off fighting guys that fans care about seeing him fight like Regis Prograis, Maurice Hooker, Ivan Baranchyk, Josh Taylor, Vergil Ortiz and Jose Carlos Ramirez.

Apart from the hand injury, this was the best performance by Lomachenko since his fifth round stoppage win over Roman “Rocky” Martinez in June 2016. It was a fight in which Lomachenko actually stopped someone with hard punches rather than making them quit. Although Lomachenko knocked out Jorge Linares with a body shot in the 10th round in their fight last May at Madison Square Garden in New York, it wasn’t an overly impressive performance by Loma. He was knocked down in the sixth, and hit a lot by Linares. It was a fight that looked even at times. Last Friday’s Lomachenko-Crolla fight was a full scale route by Lomachenko. He was beating up Crolla, and making him look like he didn’t belong inside the ring with him. That being said, the boxing public never thought that Crolla did belong in there with Lomachenko.

The fans thought the WBA made a mistake in letting Crolla fight in an eliminator against Daud Yordan rather than some of the younger more talented contenders like Aik Shakhnazaryan, Rances Barthelemy, Robert Easter Jr., Teofimo Lopez, Devin Haney, Ryan Garcia or Bryan Vasquez. With all those guys available to fight in a WBA lightweight eliminator, the WBA picked out Crolla and Yordan to fight. It’s no wonder that Lomachenko had such an easy time with Crolla, because he was fighting a guy that would arguably have beaten by everyone this writer just listed as being more deserving to fight in a WBA eliminator than Crolla and Yordan. Could Lomachenko overwhelm talented fighters like Teofimo, Barthelemy, Haney, Vasquez, Shakhnazaryan, Garcia and Easter with his power? Maybe, but maybe not. Lomachenko might have struggled against those fighters. Let’s put it this way. If Lomachenko suffered a right hand injury in the fourth round against those types of fighters, he would be in a world of hurt if he were forced to fight with just his left hand for the last eight rounds or so. Lomachenko was fighting the right guy for him to competing with an injury. Again, that’s not Lomachenko’s fault that the WBA selected Crolla as one of the competitors in their eliminator. That’s the WBA that made that decision. It obviously worked out well for Lomachenko that he only had to fight Crolla last Friday, and not a talent like Teofimo or Shakhnazaryan.

“We will see him back in the ring, most likely in September,” Klimas said.

We’ll have to see if Lomachenko can return in September or not. If not, then he might need to take some additional time off from the ring. Teofimo sees Lomachenko’s body breaking down as signs of him aging. Like in all sports, when a fighter ages, they start to break down in a lot of cases, and you see the nagging injuries. Some fighters don’t bring their injuries to the attention of the boxing public until after they lose or have a poor performance. Then they often tell the fans that they were coming off of an injury or fighting with some kind of ailment that kept them from being 100%.