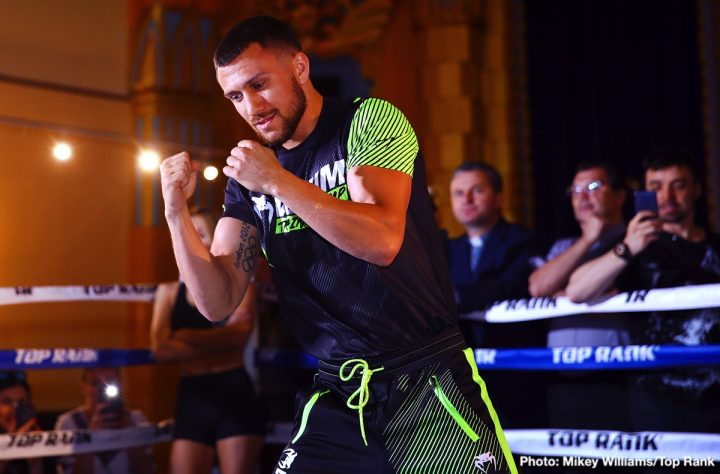 By Mike Smith: Vasiliy Lomachenko says he would fight WBA Super World super featherweight champion Gervonta “Tank” Davis (21-0, 20 KOs) for free, but he thinks the 24-year-old fighter would never agree to fight him under these conditions. Additionally, Lomachenko says he might move back down to 130 after he finishes up at 135 in unifying the weight class. He would then be looking to fight the Mayweather Promotions fighter Tank Davis.

“Maybe after 135, I’ll go back down to 130 and try and make a fight with Gervonta Davis,” Lomachenko said to the boxing media on Tuesday.

The way that Lomachenko has looked in his last two outings against Jose Pedraza and Jorge Linares, it’s inevitable that the two-time Olympic gold medalist will be moving back down to super featherweight. Lomachenko, 31, is taking too much wear and tear at lightweight for him to stay in this weight class for much longer. Loma wants to unify the division before he moves back down. He needs to beat IBF champion Richard Commey, and then beat WBC champion Mikey Garcia to accomplish that task.

“It’s true, as all people know.” Lomachenko said about his previous comments about him viewing Gervonta as just a “businessman” and not a true sportsman. “I can fight with him for free, but he’d never step into the ring with me for free, never. We have a different promoter. Boxing politics [would prevent the fight], boxing business. You all know about this,” Lomachenko said.

Gervonta Davis then responded in a Tweet that has now been deleted, calling Lomachenko an “Old man,” according to Michael Benson, and saying he’ll retire him.

Even if Lomachenko were serious about fighting Gervonta Davis for free, his promoters at Top Rank wouldn’t allow that. Boxers often talk about wanting to fight certain fighters for free, but they’re not serious. Lomachenko vs. Davis would be a huge pay-per-view worthy fight it if happened, and there would be massive money for both fighters to make. It would easily be the biggest payday of Lomachenko’s career. Therefore, Lomachenko is just talking to get attention on himself with the boxing media, but there’s no chance of him taking a fight with Gervonta for free. It would be like Lomachenko saying he would fight Floyd Mayweather Jr. for free. It’s not going to happen. It’s all posturing on Lomachenko’s part to grab attention from the boxing public for his fight this Friday against Anthony Crolla (34-6-3, 13 KOs) on ESPN+ at the Staples Center in Los Angeles, California.

Just going by how Gervonta dealt with Jose Pedraza, a fighter Lomachenko struggled with last December, it might be a good idea for the two-time Olympian to stay far away from the hard hitting youngster. Davis hits like a heavyweight. In a test of punching power done by Fox Sports, Gervonta’s left hand power was better than heavyweight Dominic Breazeale. WBC heavyweight champion Deontay Wilder tested with more power with his left hand than Gervonta, but not by much. The southpaw Gervonta hits very hard with his left hand, and it’s not a good idea for Top Rank promoter Bob Arum to risk putting the aging star in with him. Arum has been comparing Lomachenko to Muhammad Ali lately. It wouldn’t look good if Arum tried to test how good Lomachenko is by putting him in with a young lion like Davis. Fellow Top Rank fighter Teofimo Lopez said this week that Lomachenko is an “Old lion, who doesn’t want to fight the young lions.” Lopez wants to fight Lomachenko this year. He says he’ll move up in weight in 2020 to fight at 140 if he doesn’t get the fight. 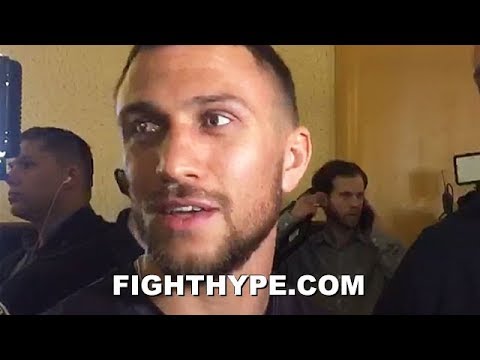