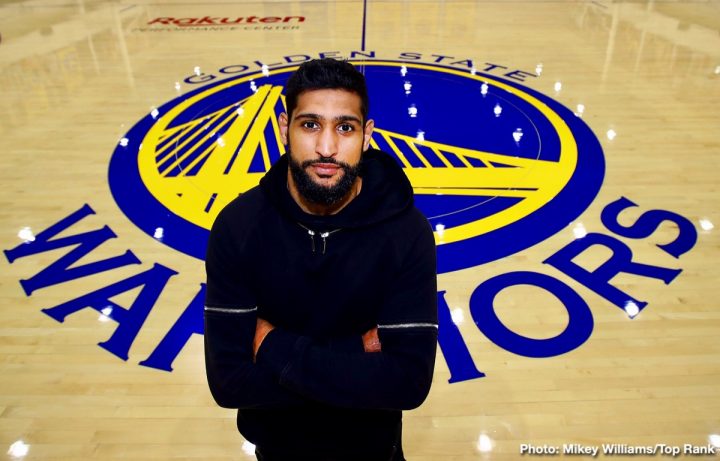 By Chris Williams: Amir Khan is working hard in finishing off the final touches of his training camp preparation for his fight against WBO welterweight champion Terence Crawford in less than two weeks from now April 20 on ESPN PPV at Madison Square Garden in New York. Khan (33-4, 20 KOs) is a big underdog in the fight despite him being an Olympic silver medalist, and former IBF/WBA light welterweight champion.

Being in great shape will definitely help Khan in this fight. But he’s going to need to be handle the counter punching ability of Crawford. He’s a fighter with good, but not great hand speed. Crawford doesn’t possess Khan or Floyd Mayweather speed. Crawford has slowed down a little since moving up to 147. He was fast when he was at 140, but it wasn’t blazing speed. He’s not another Roy Jones Jr. Khan will need a good game plan for him to win this fight.

It’s possible that the odds-makers have made Crawford the favorite due to his past wins over B-level fighters like Jeff Horn, Jose Benavidez Jr., Julius Indongo, John Molina, Felix Diaz, Dierry Jean, Raymundo Beltran, Hank Lundy, Viktor Postol and Thomas Dulorme. Those are the fighters that Crawford has beaten in the last four years. Top Rank has either had problems finding opponents for Crawford or they’ve purposefully matched him against these fighters to make sure he didn’t get beaten and to make him look better than he actually is. Khan could be the one to expose Crawford, and show that he’s not what fans think he is. Crawford picked an interesting time for him to bail from the 140 lb weight class last year. He left the division right at the time that talented young fighters Regis Prograis, Josh Taylor, Ivan Baranchyk, Maurice Hooker and Jose Ramirez were emerging.

Khan, 32, was out of boxing for two years after his sixth round knockout loss to Saul Canelo Alvarez in May 2016. Khan came back last year and stopped Phil Lo Greco in the first round in April of 2018. That was an intended mismatch, and did nothing for him. Khan’s first true fight back was his fight with Samuel Vargas last September. Khan looked both good and bad in that. He was knocked down by Vargas in the second round. Khan came back to drop Vargas in the third, and control the rest of the fight with his speed.

Finished another hard week of training, 12 rounds of sparring and mitts with Virgil today. 2 weeks to go, sweating buckets, no easy days, It’ll be well worth it at the end. #April20 #newyork #madisonsquaregarden #crawfordkhan @amirkhanpromotions @espn @trboxing @matchroomboxing

Khan is in the Bay Area in California training with his trainer Virgil Hunter. By the time Hunter finishes with Khan’s camp, he’s going to have a great game plan for him to use against Crawford. If Khan follows it to the letter, he has a chance of winning the fight. Hunter likely wants to keep Khan from getting sloppy inside the ring by showboating the way that he likes to do. Khan starts throwing flashy combinations that leaves him open for a counter shot. It’s usually a left hook that Khan gets hurt with, but not always. Canelo Alvarez knocked Khan out with a right hand.

This is a fight that Khan could dominate if he shows the form that he had in beating Paulie Malignaggi, Lo Greco, Devon Alexander and Luis Collazo. The way that Khan beat those guys was impressive. What hurts Khan now is his inactivity. He’s only fought 13 rounds in the last three years since his loss to Canelo Alvarez in 2016. Khan has a lot of ring rust. It would have been smarter for him to take one or two more tune-up level fights before facing the likes of Crawford or Kell Brook. Some of the shots that Samuel Vargas was hitting Khan with in his last fight were punches that he wouldn’t have been hit with if he had a few more tune-up fights under his belt to sharpen up.

“If I beat Crawford, and I firmly believe I can, that probably kills the Brook fight,” Khan said to the dailymail.co.uk. “If Crawford does beat me the fight with Kell could still happen…I know I’d beat him easily. But the timing has to be right for me. Then I would take it if it made financial sense.”

It’s kind of disappointing that Khan won’t take the fight with Brook if he beats Crawford. His loyal boxing fans want to see that fight. It’s understandable that Khan would be required to give Crawford a rematch before he could go in another direction with his career, but for him to say that he would go and fight unification matches and make title defenses of the WBO belt, it seems pretty clear that he really has very little interest in fighting Brook.