Hughie Fury fights on May 25 in Manchester 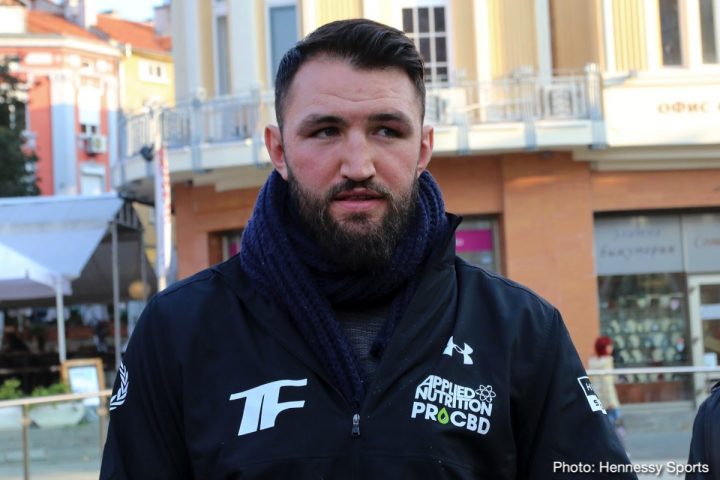 By Tim Royner: Former heavyweight world title challenger Hughie Fury (21-2, 11 KOs) will be back in action next month against a still to be determined opponent on May 25 at the Victoria Warehouse in Manchester, England.

The young Hughie’s fight will be shown live on Channel 5 in the United Kingdom, and it’ll be promoted by Hennessy Sports.

It’s likely that Hughie’s opponent will be a domestic level fighter designed to give him a confidence booster and sure thing win. There’s nothing wrong with that. Hughie could use a nice win right now, since he’s lost 2 out of his last 3 fights.

It’s unclear why the 24-year-old Hughie is fighting in a warehouse at this stage in his career, as he was pegged by some as a future world champion not long ago.

Fury is coming off of a disappointing 12 round unanimous decision loss to Kubrat Pulev on October 27 in Sofia, Bulgaria. While there are some boxing fans that felt that Hughie did enough to deserve a decision win in that fight, the judges saw it different in scoring it for the 37-year-old Pulev by the score 117-111, 118-110 and 115-113. Boxing News 24 had Pulev easily winning by a 118-110 score. It was the same situation for Hughie as in his other career loss to Joseph Parker in the previous year in 2017.

Fury didn’t throw enough punches to give himself a chance to win the fight. Parker beat Hughie by a 12 round majority decision by the scores 118-110, 118-110 and 114-114. In both of those fights, Hughie largely ran around the ring, trying to avoid getting hit by Pulev and Parker, tying them up constantly, and throwing flicking jabs.

Hughie landed excellent pot shots, and his timing was impressive. He was catching Pulev with some beautifully timed punches. Unfortunately, Hughie didn’t throw enough punches to give himself of a chance to get the victory. This has now become a trend with Hughie in his fights. He boxes well, shows good defensive ability, and moves well, but he just won’t let his hands go. The only conclusion one can make is the 6’6″ Hughie might have a stamina problem that he’s masking by not throwing punches to avoid gassing.

NEWS:   Hughie Fury: "Dave Allen Keeps Mentioning My Name, Let's Get It On!"

Hughie is still ranked in the top 15 by the International Boxing Federation at #14, but he’s not going to stay in that position for long if he doesn’t start getting some wins under his belt. His promoter and trainer might need to consider bringing Hughie back to a lower level in terms of competition, because he looks too green at this point to be mixing it up with the upper level heavyweights.

If Hughie had turned pro after a long amateur career, he’d be further along than he is now. Hughie still looks like an amateur boxer trying to find his way. His management would do well to restart Hughie’s career by bringing him back to the domestic level, and then slowly working to the European level and then finally put him in with the world class fighters. If they continue to match Hughie against top tier guys like they’ve been doing recently unsuccessfully, he’ll wind up as a journeyman before long, and have nothing to show for it.

Hughie doesn’t look like he’s on the same level as young heavyweights like Daniel Dubois and Nathan Gorman. Joe Joyce, although just as inexperienced as Hughie at the pro level, looks levels above him in terms of progression. Hughie needs work, A LOT of work before he’ll be ready to compete against the best heavyweights in the division. It’s not an impossible task, but it’s going to require that his promoters recognize that he’s badly in need of development. He’s looking like his development as a heavyweight has been stunted. Hughie is never going to be a power puncher, and his stamina problems will likely be there as well, but he can still be improved. To what extent is unknown at this point.

Boxing » News » Hughie Fury fights on May 25 in Manchester