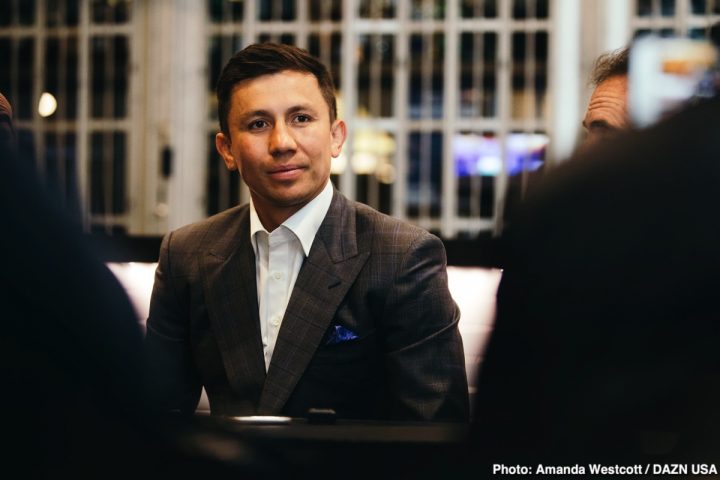 By Sean Jones: In a predictable move, former IBF/WBA/WBC middleweight champion Gennady Golovkin announced on Wednesday that he’ll no longer be trained by long time trainer Abel Sanchez. Golovkin (38-1-1, 34 KOs) had been with Sanchez since 2012, and had trained at Big Bear, California with him at high altitude. For some, this is a move that was long overdue for Golovkin. Sanchez was a good trainer during a certain part of GGG’s career when he was facing lower level opposition, but now that he’s facing the elite level fighters that are younger than him, a new trainer would be a breath of fresh air.

Golovkin’s two recent fights against Saul Canelo Alvarez in which he failed to get the victories, highlighted the limitations of Sanchez as a trainer. He didn’t appear to be coming up withe right corner advice to help Golovkin make adjustments to the things that he was doing in the fight.

“I would like to announce that I have made a major decision for myself and for my career. I want to build on what I have already achieved and continue to better myself. Therefore, I will not be training with Abel Sanchez. This was not an easy decision for me and it is not a reflection on Abel’s professional abilities. He is a great trainer, a loyal trainer, and a Hall of Fame trainer.”

The departure by GGG closely follows British heavyweight Joe Joyce leaving Sanchez to join up with Adam Booth. There was a lot of speculation on social in what led to Joyce leaving Sanchez. Most boxing fans believe that Sanchez has a full plate with a lot of different guys he’s training at Big Bear, and might not have time to devote to certain fighters. There’s also the belief that Sanchez is too offensively oriented for him to be a good fit for fighters that need help with their defense. Golovkin obviously has been getting hit a lot in his fights.

Sanchez seemed lost during Golovkin’s second fight with Canelo. He also didn’t look like he had any answers for Murat Gassiev during his defeat at the hands of Oleksander Usyk last year in the final of the World Boxing Super Series. Sanchez looked flustered during both fights, and didn’t seem to have any answers.

As the saying goes, ‘Better late than never.’ It’s not too late for Golovkin to get a good trainer to help improve on his already great talent.

“I will be announcing my new trainer at a later date. But today, I want to thank Abel for the lessons he taught me in boxing,” Golovkin said.

It would be interesting if Golovkin were to sign on with Canelo Alvarez’s trainer Eddy Reynoso. How would that work? It wouldn’t obviously with Reynoso having to train two guys at once for the same fight, but it would be fun to see him try.