Gervonta Davis vs. Yuriorkis Gamboa possible for July 27 on Showtime 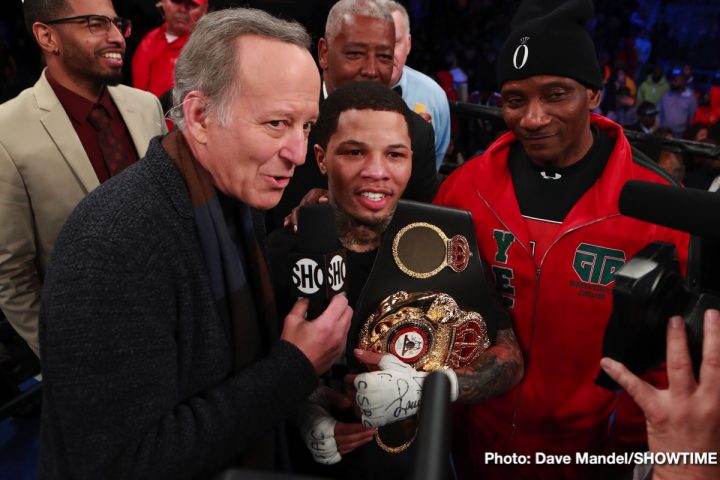 By Jeff Aranow: WBA super featherweight champion Gervonta “Tank” Davis will be fighting on July 27 on Showtime, possibly against former WBA 126 lb champion Yuriorkis Gamboa in Baltimore, Maryland. Dan Rafael is reporting that Davis (21-0, 20 KOs) will be making his homecoming for this fight this summer on the 27th of July at the Royal Farms Arena in Baltimore.

This will be an interesting fight despite the fact that Gamboa is nowhere near the level he was at years ago. With that said, Gamboa arguably has more left in the tank than Abner Mares, a fighter that Mayweather Promotions were interested in matching Gervonta up against last February. It’s unclear why they’re looking to match Davis against so many old timers. He’s good enough to fight guys in their prime, and he should be doing that instead of beating up on old guys.

The 37-year-old Gamboa (29-2, 17 KOs), who some boxing fans felt was over-the-hill just two years ago when he was stopped in the seventh round by high level journeyman Robinson Castellanos (24-14, 14 KOs), has won his last three fights in beating Miguel Beltran Jr., Jason Sosa and Alexis Reyes.

Davis, 24, is coming off of a sensational performance in stopping former WBC super bantamweight Hugo Ruiz Jr. (39-5, 33 KOs) in the first round on February 9 in Carson, California. Ruiz, 33, was a late replacement for former three division world champion Abner Mares, who had suffered an eye injury and had to pull out of the fight.

2004 Cuban Olympic gold medalist Gamboa was considered the best fighter in the featherweight division. Gamboa has been his own worst enemy by not staying active with his career since 2012. When he was fighting on a regular basis at featherweight from 2007 to 2011, he was unbeatable and looking like a mini-Mike Tyson. It was only after Gamboa moved up to 130, and then 135 that he’s struggled.

The combination moving out of the featherweight division, and fighting irregularly has badly hurt Gamboa’s once promising career. Gamboa moved up to lightweight in 2013, and was beaten by a much bigger Terence Crawford by a ninth round knockout in June 2014. That’s a fight that should have never happened had Gamboa stayed in a weight class that he was more suited for at featherweight. Crawford would have never gone down to 126 to fight Gamboa, and if he did, he’d likely have been too weakened from weight loss to hang with him. As it was, Gamboa was giving Crawford all he could handle until he was dropped in the fifth round after slipping on the canvas. Gamboa fought once in 2015, beating Hylon Williams Jr., and then not at all in 2016. One fight in two years for Gamboa, which was shocking for a fighter with his kind of talent. Gamboa fought three times in 2017, but then only once in 2018. It’s unclear what happened for Gamboa not to fight more than one time last year, but obviously not a good thing for him if he’s going to be sitting out of the ring until the Gervonta Davis fight on July 27.

In his prime, Gamboa would have been a been a real handful for Davis, but not now. This is a mismatch. Gamboa is too old, and he’s been too inactive to hang with a younger fighter like the 24-year-old Davis.